Working for a state Liberal leader is a familiar gig for Therese Kenny, who stood, unsuccessfully, for the Liberals in the seat of Torrens in last year’s state election.

Kenny worked as a media adviser with Liberal Opposition leaders Martin Hamilton-Smith and Isobel Redmond, before joining Pyne’s office in 2012. She’s been with Pyne – a close confidant of Marshall – ever since.

Kenny’s background is broader than some might expect: she once worked for Northern Territory Labor MP Warren Snowdon and Bannon-era Labor minister Kym Mayes.

Marshall’s office told InDaily that her new responsibilities would include overseeing the Premier’s program – a strategic role rather than day-to-day diary management – and some parliamentary work.

Kenny’s career also includes a stint as a producer with ABC radio.

Her brother Chris Kenny is a well-known journalist, presenter and columnist with Sky News and The Australian. He raised a few eyebrows when, as a working journalist, he came to Adelaide last year to campaign for his sister’s election. His Liberal links are no secret: he worked for Alexander Downer when he was foreign minister and as chief-of-staff to Malcolm Turnbull during his stint as Opposition Leader.

Footnote: Kym Mayes got in touch post-publication to note that he believes Therese Kenny was a public servant, transferred to his ministerial office. He never had cause to question her dedication to her work. He also notes that another Kenny – Mark, a cousin of Therese and Chris – was his press secretary, and a very talented journalist. 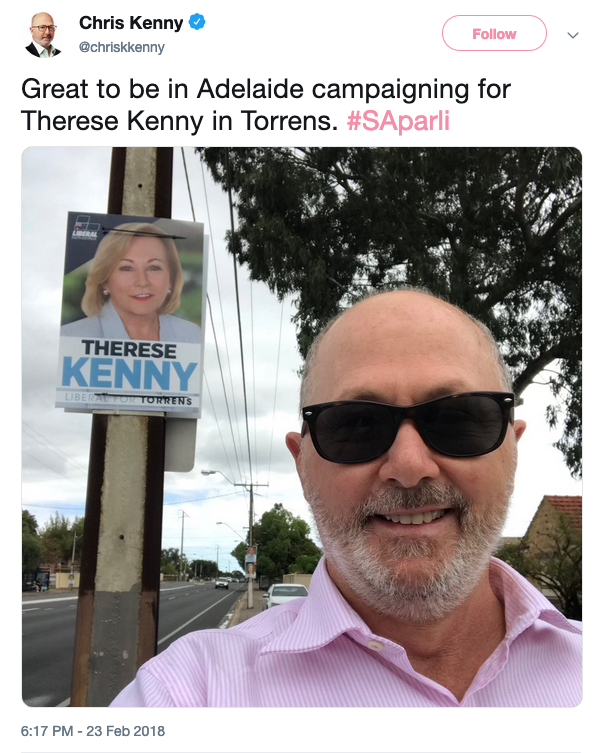 Jobs for many boys and a few girls

The Administrative Appeals Tribunal has long been a high-paying post-politics option for politicians – and federal Attorney-General Christian Porter this week continued the tradition with a slew of former MPs given plum, long-term jobs on the body.

Federal Labor reckons Porter’s appointments of former political colleagues will undermine public confidence in the tribunal. And the list is long: among the 34 new appointments are former Senate president Stephen Parry (forced to resign in 2017 as one of the many victims of the citizenship affair), former Liberal MP Bob Baldwin, former Nationals minister De-Anne Kelly, as well as former Liberal staffers.

Proving once again that South Australia’s  political climate is unique, Porter has appointed two former politicians – one Liberal and one Labor.

Porter insists all of the appointments were made strictly on merit.

It was always going to happen after the party’s disappointing state election showing, but yesterday’s Government Gazette marked the official end of Nick Xenophon’s SA Best.

The party that just 12 months ago was being touted as a potential defining force in SA’s Lower House is now simply – SA-Best.

The notice in yesterday’s Gazette.

Xenophon has made good on his promise to retreat from public life since he failed in his attempt to unseat Liberal Vincent Tarzia in the eastern suburbs seat of Hartley. He reportedly quit the party late last year, before SA-Best made the inevitable decision to change its name.

SA-Best’s two Upper House candidates, Connie Bonaros and Frank Pangallo, will continue his legacy in state parliament for years to come, with both being elected to eight-year terms.