ABC staff and a few outsiders are picking over what remains of the national broadcaster’s archive of CDs at Collinswood.

With the local sound librarians sacked and unique material meant to have been shipped to the ABC in Sydney and Melbourne, the doors have been thrown open to the huge CD collection, believed to have originally contained around 100,000 items. InDaily understands duplicate CDs were offered first to major cultural institutions, such as the National Film and Sound Archive, before those left were offered to employees.

A separate collection of vinyl records and music ephemera remains in Adelaide, but its future is uncertain.

Former ABC sound librarian Andy McCarthy was invited to visit the collection and did so yesterday, describing the scene of his former workplace of more than 30 years as sad and bizarre.

McCarthy, a CD collector who took away several boxes of recordings with mixed feelings, said that although the collection had already been well picked-over, there was still a range of interesting material left.

While much was of little value, he did find a rare Philips classical recording that he believed was worth several hundred dollars on the open market.

“There are valuable items there, but no-one to identify what they are,” he told InDaily.

The ABC sacked two sound archive staff as part of the consolidation of its state-based sound libraries in Melbourne and Sydney, a move which angered local staff after management spent nearly $20,000 to relocate the library at Collinswood late last year.

“It was a pretty sad sight to be there,” says McCarthy. “It was a bizarre day and I don’t think I ever want to go back there again.

“I’ve got really mixed feelings. There’s a history in the ABC of dumping stuff at the end of the day.”

At the time he left the ABC in 2012, McCarthy estimates the CD collection contained about 75,000 items.

He presumes it numbered more than 100,000 when it was closed earlier this year.

Despite CDs being out of favour for radio broadcasting, McCarthy says they are still considered by collectors to be the highest-quality format.

Having said that, he believes much of the material left in the collection will be of little interest to anyone and will probably end up being sent to landfill.

Among the items left behind yesterday was one of poignant interest to McCarthy.

One of his tasks during his 12 years in the sound library at Collinswood was to find appropriate music for broadcasters to play to mark special events. One of the most difficult was Melbourne Cup Day, so he and a colleague put together a special CD of horse racing songs, such as “Fugue for Tinhorns” – the opening tune in the Broadway musical Guys and Dolls.

When he visited yesterday, there it was.

“There were two copies there, sitting on the shelf because no-one would have known what it was.”

He took one as a keepsake.

UPDATE: The day after we published this story the ABC responded to InDaily’s queries with the following statement:

“The ABC’s collection of duplicate CDs were offered first to leading Australian cultural institutions to be enjoyed by the public. In Adelaide, approximately 10,000 duplicate CDs were donated to the National Film and Sound Archive and approximately 8000 to South Australian state, public and school libraries. Any remaining duplicates were then made available to ABC employees in South Australia. This method of distribution was less expensive than sorting through the collection, particularly as most of the CDs were of relatively low value. Nationally, the ABC also donated duplicate CDs to charities, such as Lifeline.”

Most of the media has been in one voice over Adelaide’s Catholic Archbishop Philip Wilson following his conviction on a charge of concealing child sex abuse: he must resign.

Wilson is preparing an appeal against his conviction and says he will quit immediately if the legal move fails, but the flood of opinion pieces continues unabated.

One journalist, however, has broken ranks in a rather telling way.

Alan Atkinson, a freelancer who for 10 years up to 2015 was a senior member of the ABC newsroom in Adelaide, has written a challenging piece for the Eureka Street website – run by the Jesuits.

Atkinson, who points out he isn’t a Catholic and has met Wilson only once, details his experiences in interviewing the Archbishop in 2010 after one of his interstate ABC colleagues first broadcast a story questioning whether Wilson should have known about the activities of pedophile priest James Fletcher in the 1970s.

He says he found a critical error in timing in the ABC’s report – which didn’t include balancing comment from Wilson.

When he sought, and obtained, an interview with Wilson, the ABC’s Sydney newsroom management was not happy.

“I was pleased with the interview but the ABC in Sydney was not,” Atkinson writes. “I was told by editorial management (which has since changed) that we would have to hold off putting the interview to air until it could be done again ‘properly, with proper questions’ sent from Sydney. The Archbishop should not be allowed to get away with ‘wishy-washy’ answers.

“I was told I had no right to contact the complainant and was angrily questioned on just how much research I had done on someone else’s story.”

Atkison says his interview was broadcast only in South Australia.

“The most surprising questions to me from Sydney were: ‘What is your relationship with the Archbishop? How well do you know him? Is he a friend of yours?’ I took away from these exchanges that minds were made up about Wilson. I concluded, rightly or wrongly, that he was a target and that the prevailing view was: ‘He must have known.'”

Are councils on the nose?

Another widespread, and mostly unchallenged, presumption is that local councils are held in contempt by the public and, therefore, the State Government’s rate-capping proposal is a no-brainer.

Councils may well be unpopular, but a new poll shows that local councils aren’t as badly on the nose as the two tiers of government above them – at least on several key measures.

The poll by Essential Research, published this week, shows that people rate local councils higher than the states or federal tiers of government for accessing services. Councils also rated highest on the measures of serving the public’s interests and allowing people to have their voices heard. Councils rated marginally higher on the value-for-money measure. 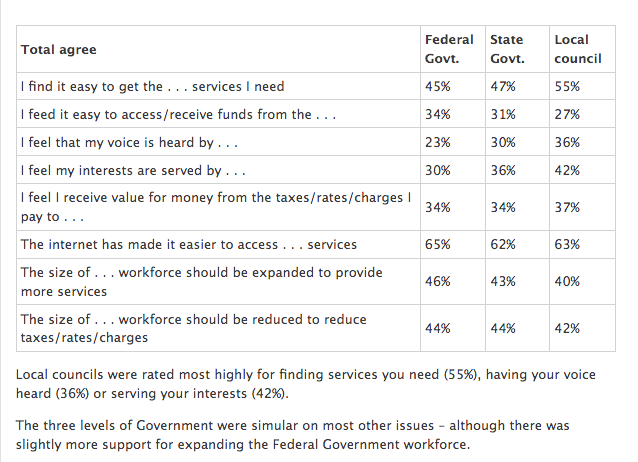 The same poll addresses another hot topic: the banning of free plastic bags in supermarkets. While South Australians look on in bemusement, the move by supermarkets interstate has caused a full-blown, tabloid-driven, culture wars meltdown.

Essential, though, found that an overwhelming majority – 73 per cent – of respondents support a ban. Only 11 per cent were opposed.