Mercury CX, a skills development organisation for emerging filmmakers and screen talent, has seen a funding submission for an ongoing operating budget of between $700,000 to $1.2 million knocked back by the new Labor Government ahead of today’s State Budget.

The decision has prompted crisis talks within the not-for-profit, with members voting unanimously at their annual general meeting on Tuesday night to oppose closing down the organisation.

The 30-year-old cinema hosts a select range of local and international films year-round and has a prominent role in Adelaide’s festival season, particularly during the Adelaide Film Festival and the national Screen Makers Conference.

But Mercury CX CEO Karena Slaninka says the organisation is now facing the prospect of closing its doors after its cinema revenues were decimated by the pandemic and its submission for “operational funding” was rejected by the new government.

“There’s a great deal of fear and anxiety,” she told InDaily.

“There’s 19 people that are set to potentially lose their jobs, and I know that the board are pretty adamant that they don’t want to see the organisation close.

“So it’s a worrying, very concerning situation for everybody, there’s a lot of anxiety and uncertainty and also equally I think there is this knowledge that this organisation is a very special and unique place.”

We’ll be seeking a groundswell of support to keep the doors open, now is the time for people to actually stand up and say that they value and they want this organisation to continue.

“I would like to say that we can get us to the end of the year, I think it’s really important to say that the board and the staff are committed to working and doing whatever we possible can, as are the members,” she said. 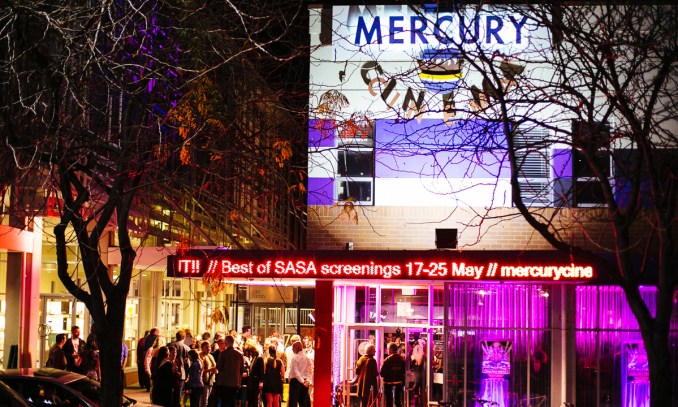 The Mercury Cinema on Morphett Street says it is facing a funding crisis in its 30th year of operating. Photo: Andre Castellucci

She added that Mercury CX’s “minimum” request for $700,000 in “core” funding is “actually not a lot in the grand scheme of things”.

According to the State Government, Mercury CX receives $250,000 annually from the South Australian Film Corporation to support talent development in the film industry.

The former Marshall Government also gave the organisation $300,000 in emergency funding last September to support its ongoing operations. Slaninka says $150,000 of this has been received so far with the next instalment due in four weeks.

The decision from the Malinauskas Government to knock back Mercury CX’s minimum $700,000 request was based on a confidential report on Mercury CX’s operations commissioned by the former Marshall Government last year.

A spokesperson for Arts Minister Andrea Michaels claims the report, handed down just before the March State Election, “ultimately conclude(d) that the current operating model for Mercury CX was unsustainable”.

“There are no SA Government funding mechanisms currently available to support Mercury CX’s current operating model, however the Minister is fully supportive of ensuring development opportunities being provided to emerging filmmakers, within the current budget allocation,” the spokesperson said in a statement.

But Slaninka claims the report’s findings “recommended … providing operational funding ongoing to us”.

Neither the State Government or Mercury CX has disclosed the full report. Michaels has agreed to an urgent request to meet with Mercury CX’s board next week.

Slaninka, a former director at Screen Tasmania, said she was “hopeful for continued talks with the government”.

“We really remain confident the government will continue to recognise the value of the screen sector …. we want to deliver for the government and for the industry to help generate jobs and support employment outcomes,” she said.

She added that Mercury CX would be kicking off a “Save the Mercury” fundraising campaign as early as next week.

“There will be hundreds of thousands of people who have been through this organisation both through industry programs and also events at the cinema, and now is the time for them to show their support of The Mercury,” she said.

“We’ll be seeking a groundswell of support to keep the doors open, now is the time for people to actually stand up and say that they value and they want this organisation to continue.”

Mercury Cinema is celebrating its 30th anniversary this year after it was opened by Queen Elizabeth II in 1992.

Mercury CX and its predecessor the Media Resource Centre used to be funded by Screen Australia. The not-for-profit, formerly located on Pirie Street, remains one of the longest-standing members of the Screen Development Australia national network.