The Opposition’s election commitment revives plans from the Weatherill Government to build a 1km spur line and station running off the Outer Harbor line to connect the Port Adelaide city centre to the CBD.

The new spur line was to be built from a point before the Outer Harbor line crossed Port Road, heading into Port Adelaide towards the waterfront and ending at Baker Street where the Pirate Life brewery is now located. 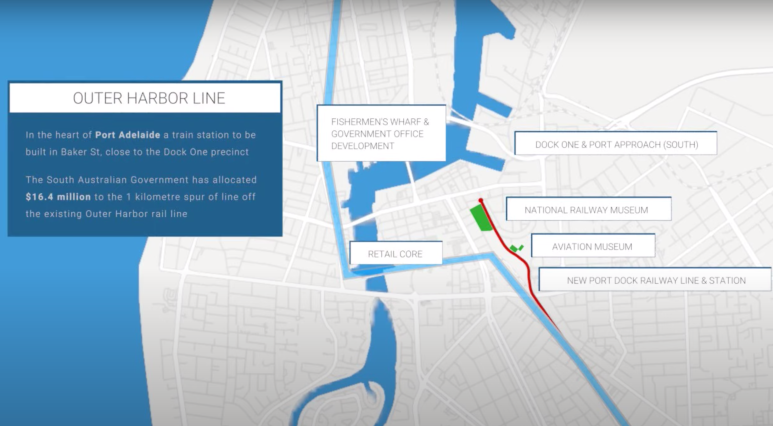 A Department map of the proposed Port Adelaide spur line in 2017.

The new station and associated bus interchange was slated for construction on the eastern side of the National Railway Museum.

But the Marshall Government put the extension on ice in June 2019, citing a completed “detailed technical design” which found the project would actually cost $40 million.

A Labor spokesperson said a Malinauskas Government would put $52 million towards the extension – more than $35 million more than the Weatherill Government had initially budgeted.

The move marks Labor’s first major transport extension commitment this election, in stark contrast to their pledges four years ago to extend the city’s tram network out to North Adelaide and Norwood – promises that had a combined cost of more than $500 million.

“After being cruelly cut by the Marshall Liberal Government when they were elected, a Malinauskas Government will get rail back to the heart of the Port,” Labor MP for Cheltenham Joe Szakacs posted on Facebook.

“This is an investment for the whole western community. It’s backing in local business and local jobs. And it’s part of Labor’s commitment to return our privatised trains back to public hands.”

The original Port Dock train service was axed in 1981 and the station later demolished to make way for a police station and Port Adelaide Magistrates Court, moving the nearest railway access to a station well south of the centre, near Commercial Road on the Outer Harbor line.

Port Adelaide Enfield Mayor Claire Boan said she is “really pleased” with Labor’s vision for the railway line but called for a broader public transport solution.

“[The spur line] doesn’t meet the needs of the greater peninsula but it certainly meets the needs of Port Adelaide, and the bus interchange is a really important part of that project.”

Boan said she has previously received assurances from the Department of Infrastructure and Transport that the Port Adelaide extension would not impact the frequency of services on the Outer Harbor line.

She also said council has plans to kick in funds to transform the Labor’s proposed station and bus interchange precinct into a “hub of activitiy”.

“It could be an art space, it could have live music, connecting through wayfinding to get into our heritage precinct and of course into Pirate Life who are big supporters of the Port Adelaide region as a whole,” she said. 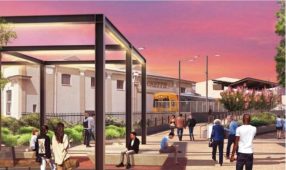 “So we would see that this isn’t just a train and bus interchange, it’s actually a place that people can gather and that it would complement the heritage precinct.”

The mayor said she would be calling on the Liberals to match Labor’s pledge, although Transport Minister Corey Wingard was quick to rule that out on Wednesday.

“Like all of [Labor’s] other policies this one is unfunded and unplanned,” he said.

“The Labor party has proven it can’t be trusted with rail projects. It left the Gawler Rail Electrification Project in a shambles which we have been forced to fix.”