Bev Langley, who runs the Minton Farm Native Animal Rescue Centre at Cherry Gardens, told InDaily her daughter Jessica Jones and family were lucky to survive the blaze, which came right over the top of their Mount Bold Road property at Bradbury.

Her daughter sent her a photo of the approaching flames about 9pm.

“She sent me the photo and said ‘here it comes’, so more or less ‘goodbye’,” Langley said.

One of the photos Jessica sent her mother.

Langley said Jessica and her husband Graeme and 18-year-old daughter Mary battled embers with a fire pump and hoses, while their two youngest children, aged 7 and 5, stayed in the home’s fire bunker, with their pet dog and chickens.

“The fire came right over them and everything is gone, beautiful gardens, pastures, fencing,” she said.

Langley said the family was lucky to survive and the house was also saved.

“It could have easily gone so much worse if it was windy.

“We’re all alive and we all have homes and that’s all that matters.

“Once the front had passed, the CFS rolled up and starting helping them.”

Langley said the fire also came close to her home on Cherry Gardens Road, Cherry Gardens, but luckily it was heading the other way.

“We could see it, you could just about touch it but we were well advised as to the direction of it heading away from us,” she said.

Fellow Hills dweller, author and academic Danielle Clode has written extensively about the need for vulnerable residents to prepare a bushfire survival plan – and last night she was forced to put hers into action.

The award-winning writer and Flinders University senior research fellow survived Victoria’s Black Saturday blaze – and later published a book about Australia’s bushfire preparedness, A Future In Flames – but this was the first time a bushfire has actually reached her property.

“About 4.30pm we got an alert about the fire in Cherry Gardens,” said Clode, a 10-year resident of Bradbury whose property sits behind Scott Creek Reserve and near Mount Bold Reservoir.

“You could see the huge plume of smoke coming up from the back of our property… we spent quite a lot of time watching how that progressed and getting the property prepared.” 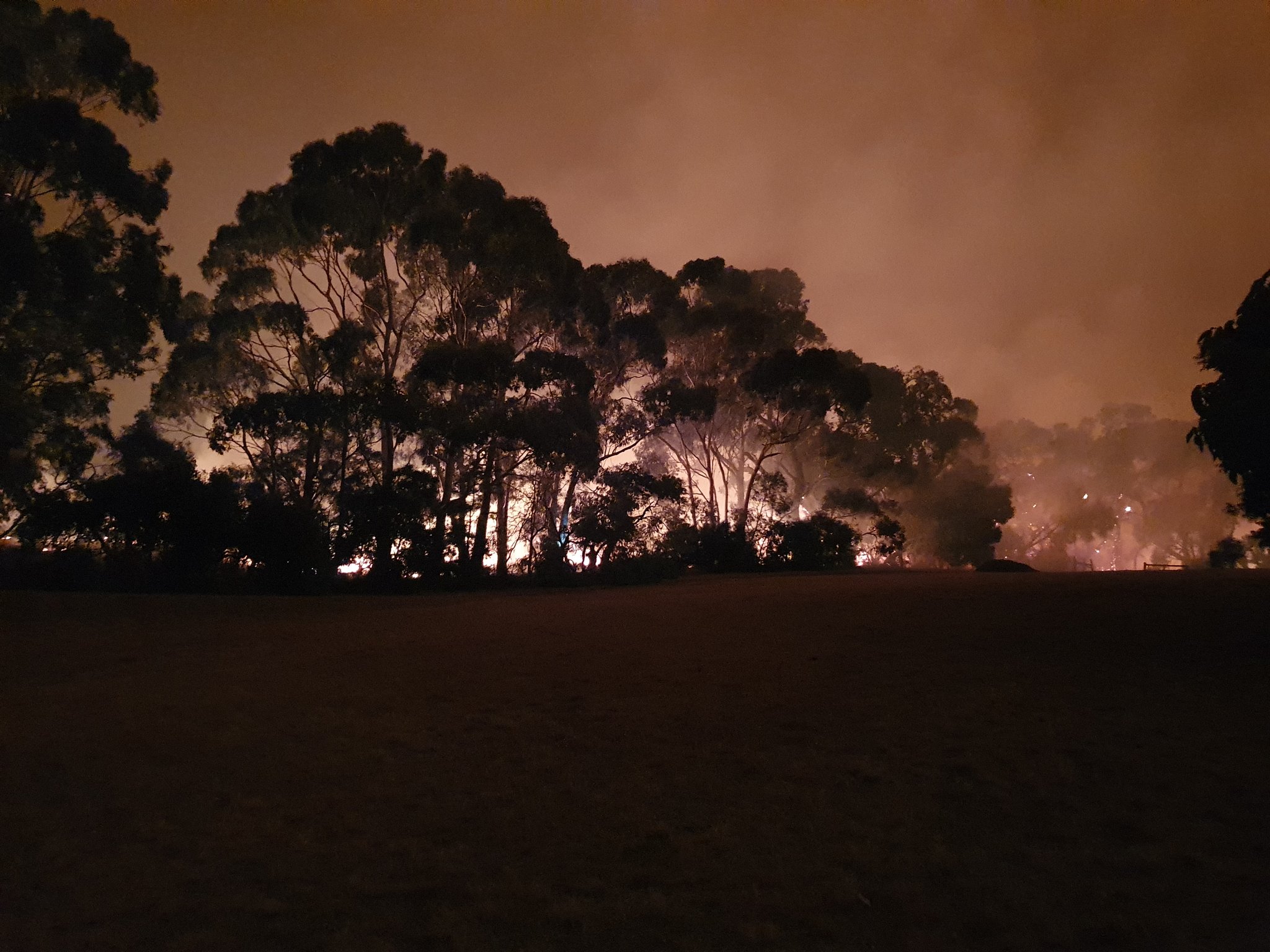 The Clodes have a well-established plan: just over a year ago she published an article on The Conversation urging others to do the same.

“Our best protection lies in our own hands, safeguarding our own property and making carefully considered plans in advance as to how to save our own lives,” she wrote at the time.

Last night, she did just that, setting about checking pumps, preparing hoses, filling buckets and rounding up animals.

“Then it’s a matter of sitting and waiting,” she said.

Monitoring the fire’s progress on a CFS scanner, Clode “could hear it was coming closer”.

Once it reached the roads behind her property, she could see the glow above the trees – “and hear the fire as well”.

“It was really noisy as it roared up through the reserve,” she said.

Thick vegetation in the reserve nearby allowed the fire front to tear through the Clodes’ property, while several fire trucks attended to assist them repelling it.

“That was very helpful,” she said.

Also helpful was the speed of the blaze dropping off as it approached.

“It came up the crest of the hill quite fast, then slowed as it came over the hill, burning through the verges and a line of trees up the side of our property,” she said.

By midnight, “things settled down and looked a lot calmer”.

Most of their neighbours had left, with Clode undertaking a morning check on their properties.

“One of our neighbours lost their house,” she said.

“I’ve just been over there and checked on that – her chickens survived but not her house.”

Little bit of excitement today. Closer than I'd like. Fire plans in action. pic.twitter.com/Ix9oan5JlW

Clode says the 2009 Black Saturday blaze was “five minutes from impacting our property”.

Back then her husband was captain of the local fire brigade while she was working in a community safety role with the CFS.

She says it’s important for people to prepare themselves both mentally and physically for bushfire danger, “to help people think through the complexities of what they need to do”.

“It’s really complicated [and] the emotional response is important, being aware of the sorts of stimuli that are going to happen,” she said.

“The noise is really dramatic – the fire’s roar… you think there’s a freight train coming towards you, it’s really quite terrifying on a quite visceral level…

“But if you know that’s what’s going to happen, you can go, ‘right, I know what that is – that’s the fire’, and it doesn’t frighten you as much.”

She said while last night “you could see flames leaping up, taller than the trees”, it’s important to recall that “a small fire is just as dangerous as a large fire – both of them can kill you”.

“The more we’re aware of what to expect, the less frightening those things are – and that’s the advantage of having a plan, so you don’t panic,” she said.

“You know what you have to stick to, and that gives you the confidence to follow it through.”