Greaton, the development company behind the operation, will on Wednesday seek planning approval from the State Planning Commission Panel for the construction of a 53-metre tall mixed-residential apartment tower after the proposal to build on top of the adjacent Balfours building fell through.

Located at 156-172 Franklin Street, the 199-bedroom proposed development is the second stage of the estimated $300 million West Franklin project in Adelaide’s West End.

Stage two will cost about $70 million.

Project commercial manager Wendy Lieng told InDaily despite the development above the Balfours building being “best for everyone” the body corporate had not supported the proposal.

The most recent development papers propose the demolition of the wall, roof and “three bays of brickwork” on the western end of the Balfours building, with a temporary wall featuring public art to enclose the western façade and create a public space.

The papers said demolition works were considered essential to remove the “encroaching” portion of the Balfours building, which was not heritage-listed.

“It is anticipated further detailed documentation will be developed as to how the original brickwork will be terminated into the new lightweight wall as well as the design scope for the public art,” the proposal said.

“The demolition works will provide important pedestrian linkages and increase the opportunities to activation of the public realm, which is a desired outcome in the Zone.

“As such the demolition of the western portion of the building is considered acceptable.” 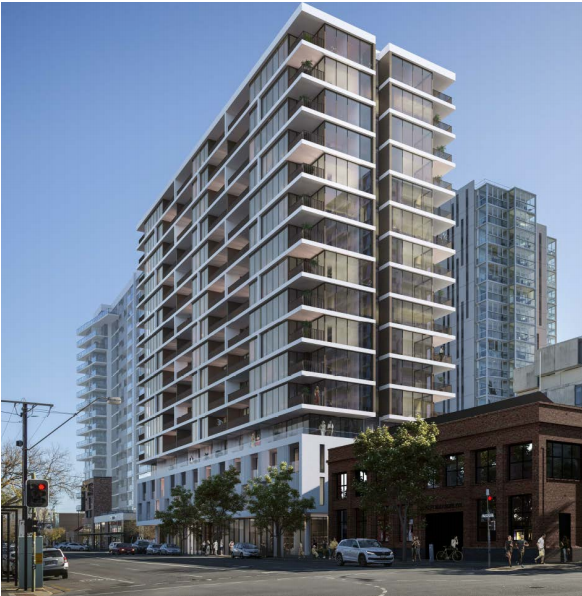 An artist’s render of stage two of the West Franklin development.

Greaton’s total developments cover about 5000 sqm between Franklin, Elizabeth and Morphett streets. The company purchased the site from the Adelaide City Council in 2014.

The first stage of the project comprises of two residential towers of 19 storeys and 17 storeys and opened early in 2019.

Stage three of the development is expected to comprise of a 17-storey student accommodation tower on Elizabeth St.

InDaily contacted The Gallery and The Altitude for comment.