Australian developer Charter Hall plans to demolish all buildings at the Southern Cross Arcade site with the exception of the recently state heritage-listed Sands and McDougall building façade, which has been incorporated into the new building design.

The Art Deco and Modernism Society of Australia describes the Sands and McDougall building, once housing a printing press, as “the first art deco façade in South Australia and the oldest-surviving art deco façade”.

InDaily reported last month that Environment Minister David Speirs rejected a request from Charter Hall to intervene in a Heritage Council decision and instead fast-tracked the listing of the Sands and McDougall building’s façade and canopy on the state’s heritage register.

At the time, Speirs criticised the developer for ignoring the façade’s local heritage-listing when it tried to submit plans to the State Commission Assessment Panel (SCAP) in July proposing to demolish the building.

The new plans, lodged on behalf of Charter Hall by Future Urban Group and to be assessed by the SCAP today, include 16 levels of mixed retail and office space, featuring approximately 1000 square-metres of ground floor commercial space, a 2750 square-metre supermarket and 39,000 square-metres of office floor area.

The 64.4-metre-high building will include eight retail outlets, a pedestrian mall connecting King William Street to James Place and a wellness centre.

The Sands and McDougall building frontage and canopy is proposed to be incorporated within a two to three-storey podium on King William Street, providing an entry to the office tower. 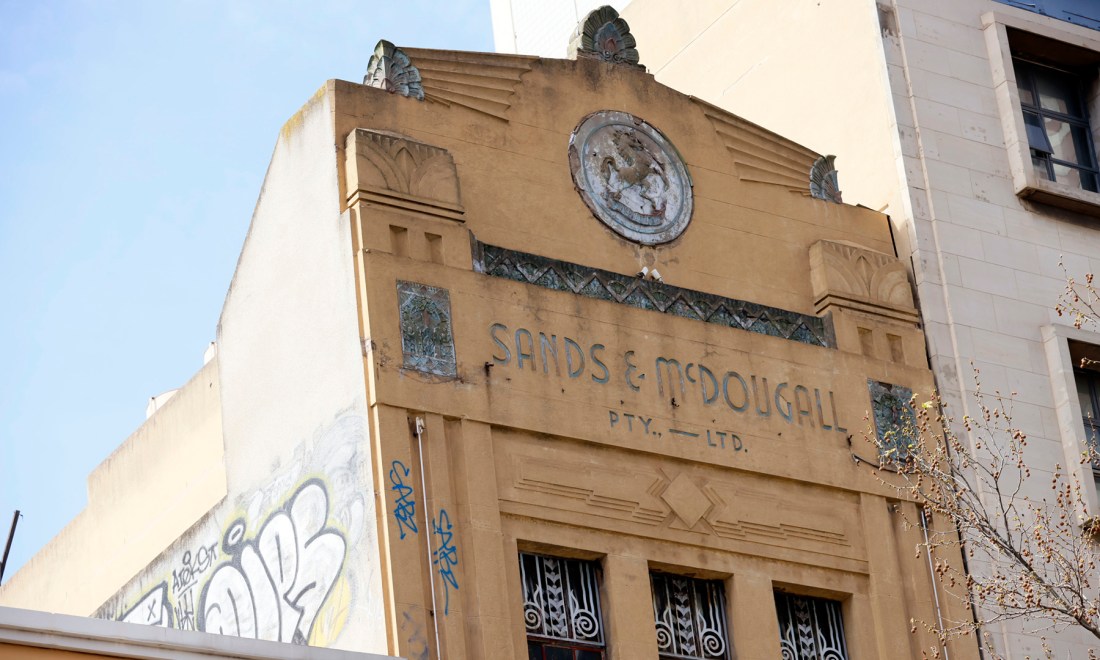 The Government Architect and Heritage South Australia have commended the plans, prompting the State Government to recommend development approval.

In his report to the SCAP, government planning consultant Damian Dawson wrote that the glazed office tower was “likely to provide a distinct and contemporary sculptural element within the CBD skyline”.

He wrote that the architects had sought to “provide a sense of the former footprint of the (Sands and MacDougall) building within the entrance foyer” by including a lounge area directly behind the retained façade.

“The façade will be activated with a new entrance door and will be visible both from the outside and within the foyer on account of the recessed glazing line either side of the façade and the retention of the side wall returns of the building,” he wrote.

“The podium treatment along King William Street is lifted to 3 storeys adjacent the heritage façade to better reflect the proportions of the heritage building.

In her submission to the SCAP, government architect Kirsteen Mackay wrote that the development was a “rare opportunity” due to its size and central CBD location.

She said the design featured “convincing integration” of the state heritage place that “celebrated” its history.