Since May, Square Holes has been exploring what Australians love to do through a national survey of 2000 adults and eight focus groups across age groups from primary school to people over the age of 70.

According to Square Holes founder Jason Dunstone, the research can help big and small businesses determine what role they can play to help people enjoy their passions.

The survey and focus groups reveal that while South Australians don’t always enjoy the same things as other states, a love of family is universal across Australia.

“The research reveals our big love is family, with 74 per cent of South Australians loving their family and all but 6 per cent either liking them a lot or a little, this is consistent across Australia,” Dunstone said.

“There is so much more South Australians love to do, from spending time in nature to good food and music.”

Good food, travel and spending time with friends and family make up the top 10 loves of Australians, from a list 35 aspect lifestyle aspects measured.

“It is interesting to compare states,” said Dunstone.

“South Australians emerge overall as less passionate about many of the lifestyle aspects to other areas, particularly the ACT and Northern Territory.”

Dunstone said that while the sample sizes in the ACT and NT are smaller from the overall sample of 2000 Australians interviewed in May this year due to smaller relative populations, the survey revealed adults from both regions rate higher in the ‘love’ or ‘like a lot’ than other Australians across activities.

“Northern Territorians were particularly high for camping, with 64 per cent loving or liking a lot,” Dunstone said.

“People living in the ACT were particularly passionate about food, travel, wine and even listening to podcasts compared with other Australians.”

The top five passions for South Australians were … 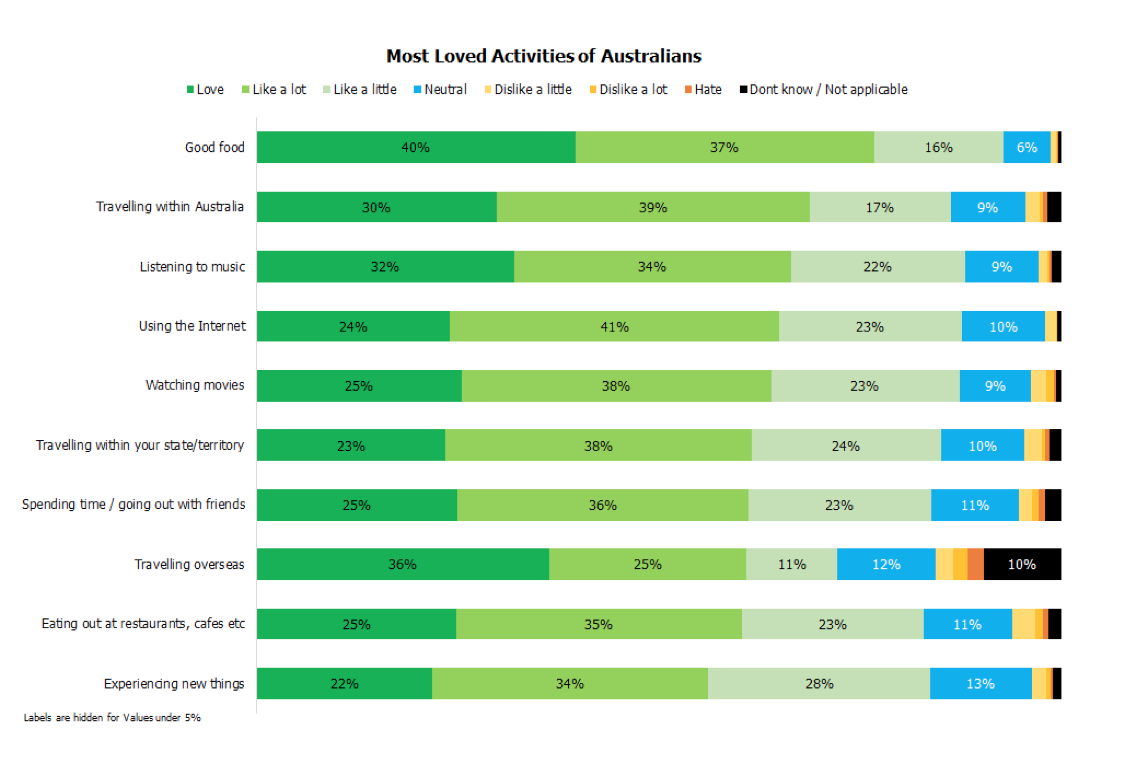 “When exploring the South Australia data further, 50 to 64 year olds emerge as the most passionate about many of the lifestyle aspects,” Dunstone said.

“They are followed by 18 to 34 year olds, 35 to 49 year olds, and South Australians over the age of 65 record lower levels from the lifestyle aspects listed.” 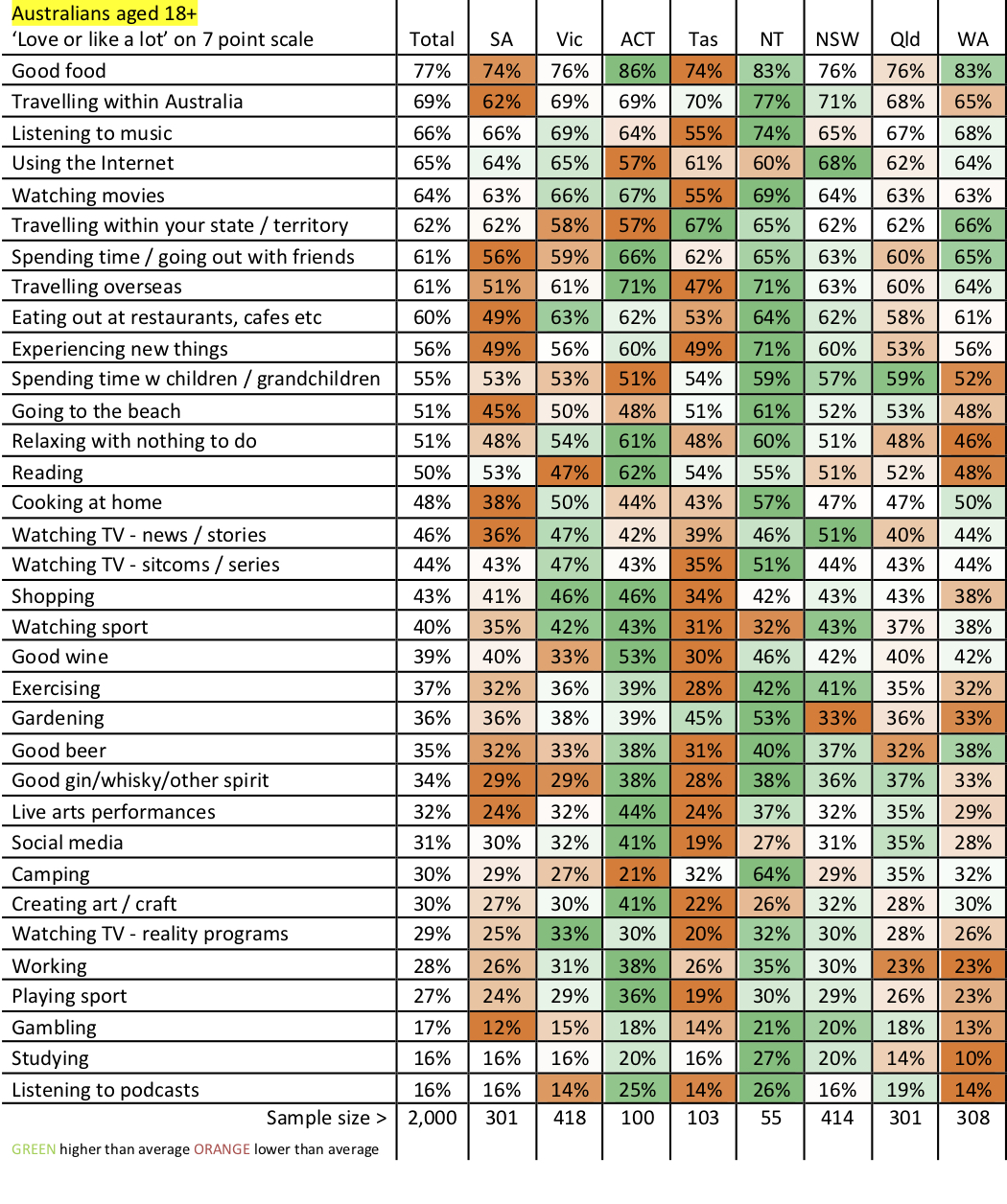 According to the survey, South Australians aged 18 to 34 are particularly passionate about:

South Australians aged 35-49 recorded above average levels of passion for:

South Australians aged above 65 were particularly passionate about:

Males illustrated stronger passion towards beer and watching sport than females, who indicated stronger levels of love and like a lot for shopping, creating art / craft and listening to music.

“When comparing South Australians living in Adelaide versus regional areas, our capital city was stronger in passion for watching sitcoms and series on TV, eating out at restaurants and cafes and watching reality shows of TV,” Dunstone said. 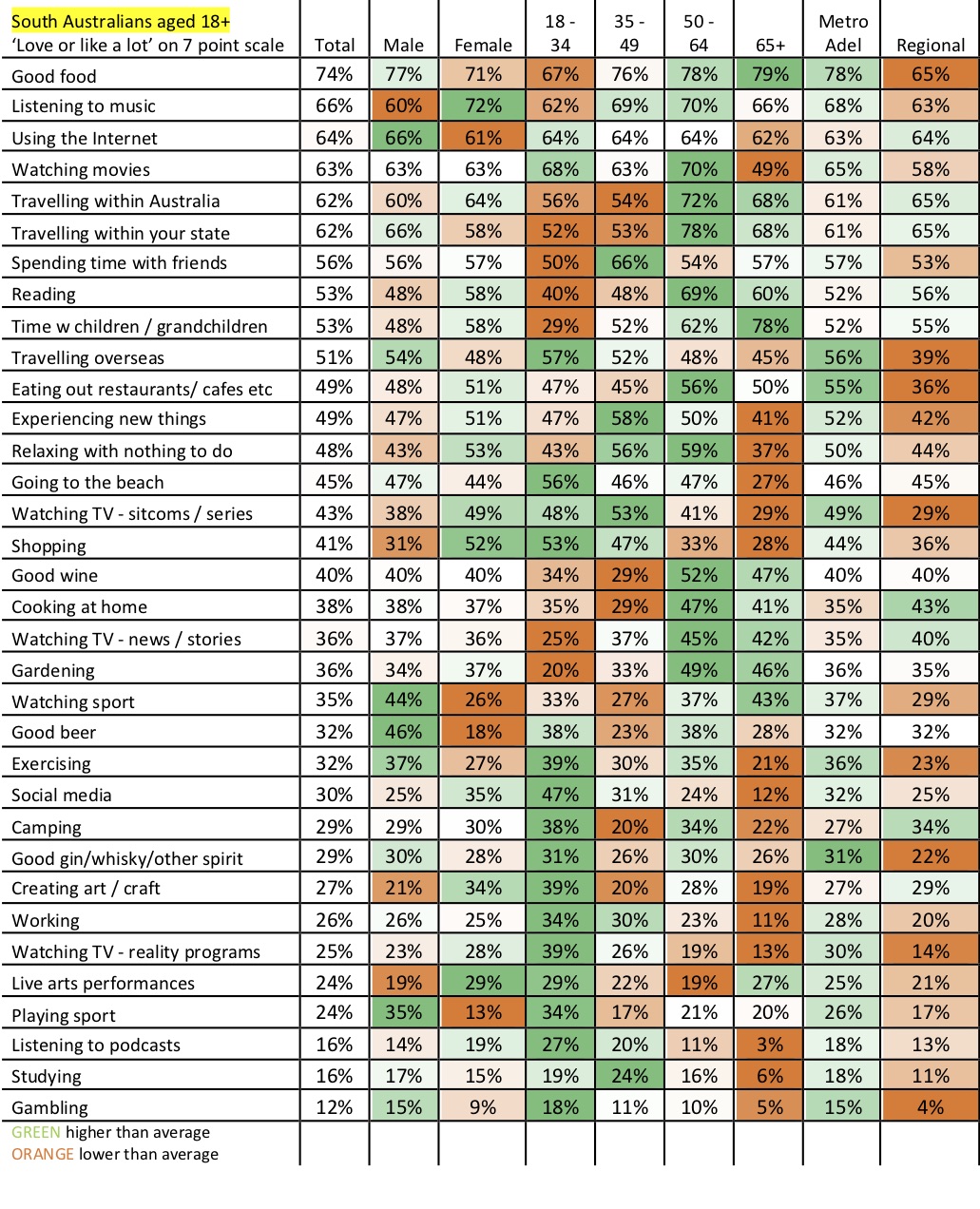 The research also explored the brands Australians love or like a lot, with Apple, Cadbury and Nike emerging as the top three.

“Findings reveal brands and businesses, big and small, playing a critical role in enabling the passions of Australians,” Dunstone said.

“Apple’s omnipresent synchronicity enables many of the loves of life. Cadbury enables sharing time and food with friends. Nike fitness and fashion.”

Dunstone said that while COVID-19 has bought much chaos and uncertainty, the passions of South Australians and other Australians still remain, with many new opportunities emerging.

“Buy local discussions are leveraging a passion for food, especially in crazy times.

“The fundamentals of life in pandemic times and otherwise continue to come back to the basics of the love of family, time with friends and enjoying simple pleasures.”

Dunstone said it was important to appreciate that the passions of one person likely differed from others due to age, gender and other factors.

“Likely this is where business growth will come from the disruption of 2020,” Dunstone said.

“Enabling people to better enjoy their passions in life, even when the world is feeling unstable.”