In a Facebook post last night, 18-year-old candidate Doha Khan accused fellow contender and former Property Council chief Nathan Paine of “break(ing) his word” by changing the order of his preferences after her ballot material went to print.

Text messages sent between Khan and Paine – seen by InDaily – show Paine agreeing to preference Khan second on his voting ticket on the proviso that she would preference him third.

In the text message exchange, Khan asked Paine to send her copies of his draft voting material confirming the preference deal before she printed her brochures that afternoon.

“I’m going to be sending my material out to be printed at around 2:00 today. Let me know your final decision by then!,” she wrote.

Paine responded the following day saying his brochure design had not been finalised “yet the order is you 2, Wayne 3”.

He messaged Khan three days later – after her brochures were printed – saying: “I will still be showing you on my preference list at #4”.

“I’ve personally invested so much of myself into this and we had an arrangement. You broke your promise to me,” Khan responded.

Paine apologised for the “misunderstanding” and offered to pay to have Khan’s brochures reprinted.

“I think it’s great that you are a young person putting yourself forward and I want to support you in any other way I can,” he wrote.

But he later said he would “rescind the offer” for “obvious reasons” after Khan told him re-printing her brochures would cost over $1700.

In her Facebook post, Khan wrote: “only after knowing that I had printed all my material did Nathan then break his word”.

Khan told InDaily this morning that she was “stuck with 5000 brochures that preference him (Paine)”.

“I acted in good faith assuming that he would follow through on his commitment,” she said. “I had to call him out.”

Paine said the exchange was “nothing more than a simple situation of confusion”.

He said he had “a number of agreements” with Khan, but had eventually decided to preference her fourth instead of second “following further conversations” with other candidates and was not aware of her printing date.

“There has been some confusion. We’re both first-time candidates, so it’s a new world for me as well,” he said.

“The reality is there was some confusion and we just need to move on.”

Paine said it was “disappointing” that Khan had decided to “raise the matter with the media”, rather than “try and engage positively”.

“It’s disappointing because it’s great to see a young female candidate in the running for this election,” he said.

“She has the right to take whichever approach she’d like, (but) my approach is to focus on speaking to voters and understanding what they need and putting out positive policies that I think will make the city a better place.”

Khan and Paine will join the six other central ward candidates at an online public forum tonight, where they will present their policy platforms and answer ratepayer questions.

The forum – to be facilitated by Local Government Association SA chief executive Matt Pinnegar – will be streamed live on Facebook between 5.30 and 7pm.

“This is an important event to make sure our community still has the opportunity to hear directly from the candidates and to ask questions before they vote,” Lord Mayor Sandy Verschoor said.

“The person elected will join our council and play a vital role in deciding how we continue to support our community through this (COVID-19) crisis.

“I think it’s very important that our ratepayers are able to make an informed choice about who they want making decisions for their city and this online forum will be an innovative way to get to know the candidates before voting concludes on May 11.” 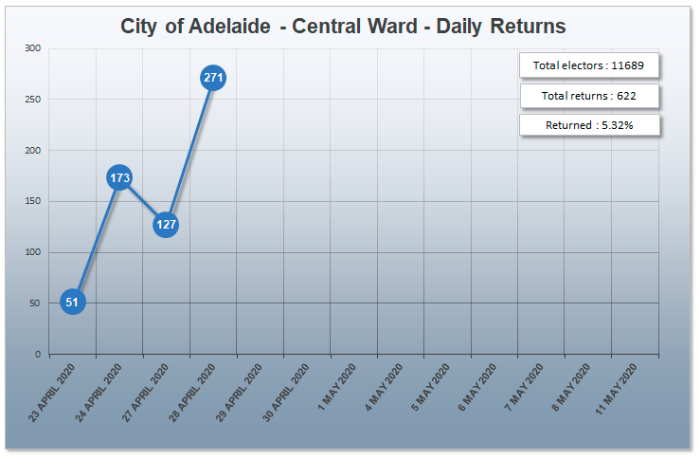 Voting closes at noon on Monday, 11 May.