The call was led by area councillor Anne Moran on the eve of the close of public consultation on the AFL club’s plan for a $65 million base on the Aquatic Centre site.

The Adelaide Football Club yesterday afternoon emailed its members urging them to “throw your support behind the proposal, which aims to make the park lands more accessible to more people”.

“It (the proposed headquarters) would be one of the most significant events in our history and bring positive change to the way we interact with you, our passionate and loyal supporters,” the email said.

The public has until 5pm tonight to submit feedback via the council’s Your Say website on both the Crows’ proposal and a “needs analysis” assessing the future use of the aquatic centre.

She said it did not allow the public to express their view about whether they wanted “commercialisation” on the park lands.

“We know that all of South Australia loves our park lands and we’ve had an aquatic centre there for a long time and this is not a replacement of it – it’s not a handout – it’s a tiny little aquatic centre and huge buildings,” she said.

Moran asked the council to immediately withdraw from the process of assessing the Crows’ proposal under its unsolicited bid guidelines, which were adopted during the last council term. 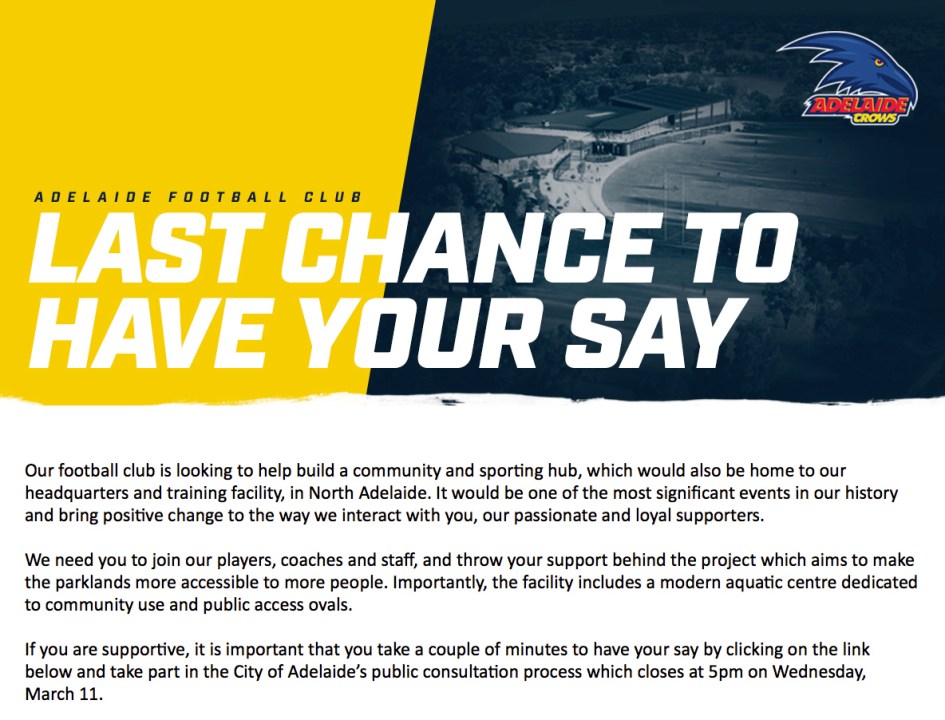 According to the guidelines, the council is able to withdraw from assessing a bid at any stage.

“I’ve giving the council one last chance to get out of this flawed process,” Moran said.

But council staff warned in a report that doing so could cause reputational damage.

“While there may be no legal or financial consequences for (the) City of Adelaide in deciding to withdraw from any unsolicited proposal process, at any time, Council should consider the reputational implications that might arise should Council resolve to terminate the Adelaide Football Club unsolicited proposal prior to the conclusion of the public consultation process.”

Couros said rejecting the club’s bid before the close of public consultation could make other organisations “afraid” to approach the council with commercial ideas.

“I am… a person that wants to follow up process,” she said.

Abrahimzadeh added that supporting Moran’s motion would be akin to “setting a double standard and saying ‘no, we’re not willing to talk to you, we are going to push you aside’”.

But south ward councillor Helen Donovan, who is not part of Team Adelaide, said “the reputational damage is already in place… because of how we have gone through this”.

“I think with hindsight we probably would have done it (assessed the Crows’ proposal) a better way,” she said.

“It has become very, very messy.

“If we can withdraw from it and use the needs analysis to proceed to look at all options – not just one option – then we would have a more transparent process, a more robust process and we would probably come up with more options.”

The Crows’ proposed building would house the club’s administrative headquarters, a community centre and a pool for public use.

The size and scale of the public facilities is yet to be determined.

The council will assess the feedback from its public consultation before deciding to progress to stage three of its unsolicited bids process, which would involve the club presenting final plans and costings.

The council last night also knocked back a motion from Moran to defer starting works on the multi-million dollar Central Market Arcade redevelopment to free up $15 million to repair the Aquatic Centre, and a separate motion from north ward councillor Phil Martin asking the council to seek legal advice to determine whether the Crows’ proposal complies with the Park Lands Act.