The council on Tuesday night unanimously voted to commission a portrait of former Lord Mayor Wendy Chapman, and to review the representation of women in its civic collection.

Chapman was elected to the Adelaide City Council in 1981, before rising to become the first female Lord Mayor from 1983 to 1985.

In 1986, she became a member of the Order of Australia, before pursuing a career in property development and becoming embroiled in the Hindmarsh Island bridge controversy of the 1990s.

The 77-year-old lives in the city and still takes interest in council matters.

Once completed, Chapman’s portrait will be the first of a woman to hang in the council chamber, which already boasts an impressive collection of all-male portraits of former Lord Mayors and prominent Adelaide pioneers.

While Town Hall’s civic collection already comprises portraits of women, none are currently displayed in the chamber – except an obligatory portrait of the Queen.

Sandy Verschoor – only the third female Lord Mayor in the council’s 190-year history – said Chapman deserved recognition in the council chamber to mark the 125th anniversary of the landmark legislation that enabled women in South Australia to vote in general elections and to stand as members of parliament.

“In the lead-up to the celebration of the 125 years of suffrage I was taking people through the chamber and was struck by the lack of women in it,” she said at Tuesday’s meeting.

“I went around and had a look at every single portrait just so I could go and see who was in here and most of them are obviously Lord Mayors prior to photography, but there’s a number of distinguished gentlemen that are on our walls that were actually not Lord Mayors.

Verschoor said she had been granted consent by Chapman to commission the portrait.

She said she would like the council to hang portraits of other “people who were fundamental to the city and fundamental in terms of representation of women”, including leading suffragist Catherine Helen Spence, who became Australia’s first female political candidate in 1897.

North ward councillor Mary Couros said it was “fantastic” that the council highlighted the achievements of women who have previously sat in the chamber. 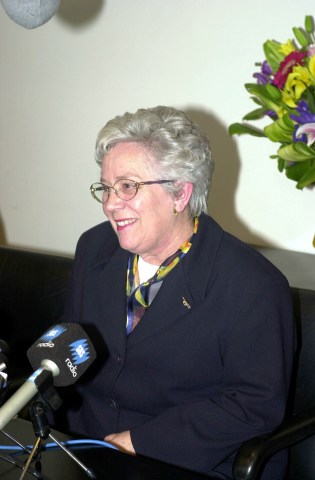 “I would think that in times like today we should be honouring women a lot more in leadership roles,” she said.

“As a woman myself I look to other women to be inspired with their leadership and I think this is a great step forward to honouring women as well.”

Area councillor of 25-years Anne Moran earlier this week told elected members she would donate a portrait of herself to hang in the council chamber.

Moran’s suggestion was supported by north ward councillor Phil Martin, who also suggested the council move its portrait of the second female Lord Mayor Jane Lomax-Smith from the Town Hall corridor to the chamber.