The pamphlet, showing a baby holding a communist flag in one hand and a rainbow flag in the other, was placed in Prospect letterboxes last week by a group referring to themselves online as “Christian Radicals”.

Among other things, the pamphlet’s contents compared the rainbow flag to the swastika, members of the LGBTQI community to Nazis and cited unsourced statistics.

South Australian Law Society president Tim White said that while a number of federal and state laws were designed to restrict freedom of expression, including prohibitions designed to curb hate speech, Australia’s anti-discrimination protection was not without loopholes.

“Australia’s discrimination laws are a patchwork of various pieces of legislation that are not unified by an overarching statement of principles, resulting in a sizeable legal grey area in which several forms of discriminatory behaviour sit,” he said.

“Hate speech laws in Australia are confined to vilification on the basis of race, colour or ethnicity under the Racial Discrimination Act – but there are no specific laws that protect other groups from hate speech.”

White said pieces of anti-discrimination legislation which made it unlawful to treat someone unfairly because of their sexual orientation – such as the Sex Discrimination Act and Equal Opportunity Act – were designed to protect people in employment opportunities, education, accommodation and access to services.

“Consideration should be given to a mechanism, such as a charter of rights, to provide clarity around the human rights protections that people should be entitled to,” he said.

Human Right Commissioner Edward Santow said the commission had been calling for a national charter of human rights for more than 20 years to help fill “some of the gaps” in the nation’s human rights law protections.

He said a charter of rights would also bring Australia in line with “other similar countries around the world”.

“It is unlawful to discriminate against a person on the basis of sexual orientation, gender identity and intersex status under federal law,” Santow said.

“Under the Sex Discrimination Act, the Australian Human Rights Commission can mediate complaints relating to discrimination on the basis of sexual orientation, gender identity or intersex status in areas such as the provision of goods and services or employment.

“While there are limited vilification protections in some state and territory laws, our federal anti-discrimination law does not prohibit vilification on the basis of sexual orientation, gender identity or intersex status.”

“Anything outside of [the Acts] we can’t deal with,” Vincent said.

“No one’s dealing with those things.”

She said, unlike South Australia, human rights legislation in Victoria and the ACT offered potential protection against vilification.

“For example, if we’re talking about discrimination in accommodation … say you were an owner of a property and you want to rent it out, you can’t discriminate in renting that [property] out.

She said it was difficult to capture the extent of vilification acts but anecdotal evidence suggested it covered a range of minorities including people living with disabilities, religious groups and members of the LGBTQI community.

“I note that this is not the first time leaflets of this nature have been distributed in South Australia – and I have been approached about this particular pamphlet several times now,” Vincent said.

“The distribution of leaflets that make such ignorant and damaging comments is very disturbing.

“We know the prevalence of suicide in these communities is much higher than in others because it is such a huge thing to be struggling with your identity. For people who are struggling with their identity … that’s just cruel. They have enough challenges without getting that in their personal letterbox.”

Vincent said in July 2019 she recommended to Attorney-General Vickie Chapman that the State Government introduce new hate laws to deal with religious pamphlets as well as more severe instances of vilification such as threat of harm to a person or their property.

“We were looking at protections against discrimination and vilification in South Australia generally … on the basis of religious dress and religious belief,” Vincent said.

“We felt that if those protections were strengthened that other groups should also be afforded protection from vilification, such as the LGBTQI community.”

A spokesperson for the Attorney-General’s office said anti-discrimination and vilification legislation would need to “strike an appropriate balance between the right to freedom of expression and religious belief”.

She said it would be unwise to introduce any new legislation in South Australia until the Commonwealth Religious Discrimination Bill had been settled. 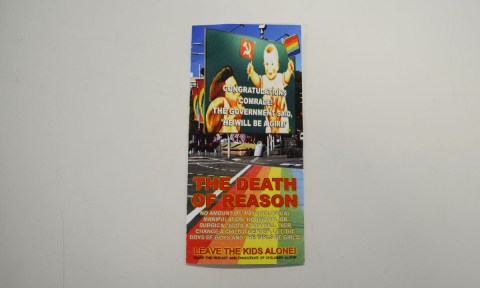 Vincent said it was “particularly inappropriate” for the pamphlet to be left in household letterboxes. Image: InDaily.

The divisive bill has the support of a range of religious organisations.

However, critics believe, if passed, the bill would elevate religious freedoms above other fundamental rights currently under state and federal laws, enabling religious bodies license to discriminate.

“The laws would create situations where religious freedom is likely to be favoured in instances where it comes into conflict with other competing rights, such as the right to not be discriminated against or the right to receive access to health care,” White said.

Although it was unclear whether material such as the pamphlet would be protected under the proposed bill, White said he expected such laws would embolden people to make public statements based on religious belief at the detriment of minority groups.

“In the absence of any clear legal remedy to challenge the dissemination of pamphlets, the best advice I could give is to simply throw this concocted piece of baseless propaganda in the bin,” he said.

The Christian Radicals did not respond to InDaily’s request for comment.