Historian Stuart Symons is passionate about mid-century architecture and design. He grew up in an early ’70s modernist house, has owned his own mid-’60s modernist house for the past decade, and two years ago launched the sell-out Modernist Adelaide walking tours.

As his own interest in the era grew, he says, he realised that the story of Adelaide’s mid-century architects should be shared more widely.

“There’s a lot of interest in this period – around 1400 people have come on the tours we have run for the last two years and the online side of it keeps growing as well.

“Interstate and internationally, books around this period of architecture are continuing to come out; a number of big exhibitions are being held, and yet even the national surveys on the topic really don’t cover Adelaide in any detail at all…

“It’s not a story that’s been told, even though we have as strong a pedigree here as any other city, so I really wanted to bring that to light.”

That is exactly what he has done with Modernist Adelaide: 100 Buildings 1940s–1970s, which is being launched this week and is described as the first book to provide a large-scale survey of Adelaide’s mid-century architecture.

The book offers an introduction to some of the key architects who transformed post-war SA through their progressive designs, and showcases a broad range of buildings – from private homes and churches, to factories, commercial buildings, educational institutions and arts venues – each accompanied by a full-page photograph and a description. 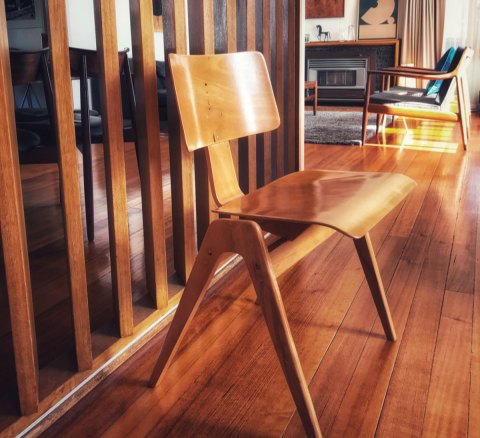 While Symons’ research involved site visits, reading articles in architecture journals from the era and studying archival material such as architects’ drawings and prospectuses, he also garnered personal recollections from former residents of a few of the houses.

“My own house [the “Lapins’ House”, built by AV Jennings in 1966] was bought from the original owner when she was retiring and moving somewhere smaller … I’ve been able to reconnect with her more recently and we’ve had all sorts of chats and she remembers every last detail, down to what the door handles were.”

Another private home featured is Roder House, built in the late 1950s by architects Pamela Opie and Peter and Marjorie Simpson for solicitor and judge John Roder and his wife Denise. According to the book, “the house parties were legendary, with revellers including a pink-shorted Premier Don Dunstan sipping cocktails and throwing oyster shells into the garden”.

Symons says the original architects’ drawings have stayed with Roder House, along with correspondence between Denise Roder and the architects. 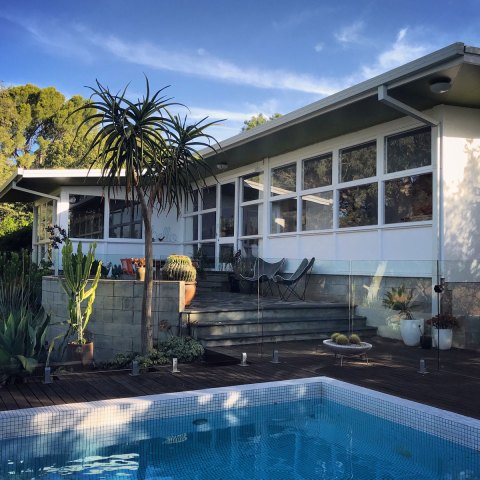 The Roder House at Beaumont was built in the 1950s and known for its parties. Photo: Stuart Symons

The modernist style of architecture emerged in the first half of the 20th century and became dominant after World War II.

In Adelaide, it was intrinsically tied to South Australia’s post-war growth, says Symons, with a strong economy, burgeoning industries and a growing population fuelling demand for new homes, office buildings, factories, schools, universities and churches that in turn reflected the fresh design principles.

“It was really about designing buildings that are very functional and honest about their purpose, and moving away from ornamental or historical styles of the past. It was based a lot on new construction technologies – reinforced concrete and steel and glass.

“In terms of the hallmarks you see in these kinds of buildings, there’s a much larger use of glass and natural light – you see that in something like an office building like the MLC building [in Victoria Square]. You see that certainly in houses of this period, where they’ve got whole walls of glass to let the light in and connect the inside with the outside much more.”

Mid-century architects were concerned with orientating buildings to make the most of the sun, and sought to work with the landscape rather than simply levelling a block or clearing the natural vegetation.

“Open planning was a feature as well … after World War II there were still building restrictions on how big a house you could build, so a lot of architects would design these smaller houses but they were open plan to give a sense of space, and they were designed to be extended in stages over time.” 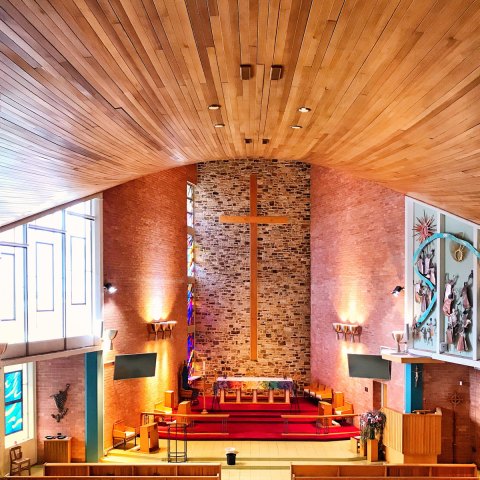 Perhaps one of the more surprising aspects of Modernist Adelaide is the number of churches featured; in fact, Symons believes they are probably the most interesting modernist buildings in the city.

“And they’re absolutely everywhere – every suburb has a couple of churches built around this period and they’re often very interesting in their design… as the ’60s goes on, they get more and more flamboyant with A-frames and all sorts of unusual structures.”

Unlike other buildings, the churches often remain largely unaltered. A colourful example from the book – and the author’s favourite building – is St David’s Anglican Church at Burnside, which features exposed brick, a sweeping hyperbolic paraboloid saddle roof lined with timber, a beaten copper wall plaque of St David by Czech-born artist and sculptor Voitre Marek, and a huge cross set into a feature wall of local quarry stone. 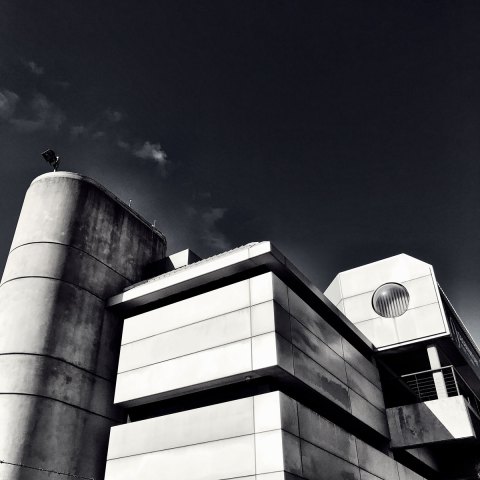 Modernist Adelaide charts the shift in architectural style over the decades, from steel and glass structures such as the 1950s-built blue-green Savings Bank of South Australia on Hindley Street, to “heavier-set forms” in the 1960s and then the brutalist-influenced buildings of the 1970s.

Another favourite building of Symons is from the mid-1960s: the Reserve Bank building in Victoria Square.

“I think that’s a really grand, elegant, mid-60s international style of high rise with the marble and this beautiful kind of floating ceiling that sits above the top of it and then the two-storey grille work around the first and second floors.

“It’s probably one of the only office buildings that actually maintain that feel in the foyers … it’s very original and it has this Mad Men kind of feel.”

Symons is also a fan of brutalism, although he acknowledges that its dominant use of exposed concrete and striking “muscular” forms make it one of the most divisive styles of mid-century architecture, with the buildings often derided as “concrete monstrosities”. His own photos may, however, help people to see them in a fresh light.

“They’re the kind of buildings where a lot of people don’t give them a second look but if you do take a closer look you can actually start to see the deliberate use of timber woodgrain that’s moulded into the concrete to an interesting architectural effect and all the effort that went into those buildings.”

Symons believes the strong interest in mid-century architecture in general may be partly due to the fact that it is associated with a period of prosperity and growth, but also a growing appreciation of building design features that blend character, functionality and comfort.

“The architects really believed in the power of this kind of architecture to shape a better society – so you could design better functional homes, better hygienic schools and office buildings for people; you could have really great functional factories that still let in air and light.

“It wasn’t just about aesthetics, it was about making life better.” 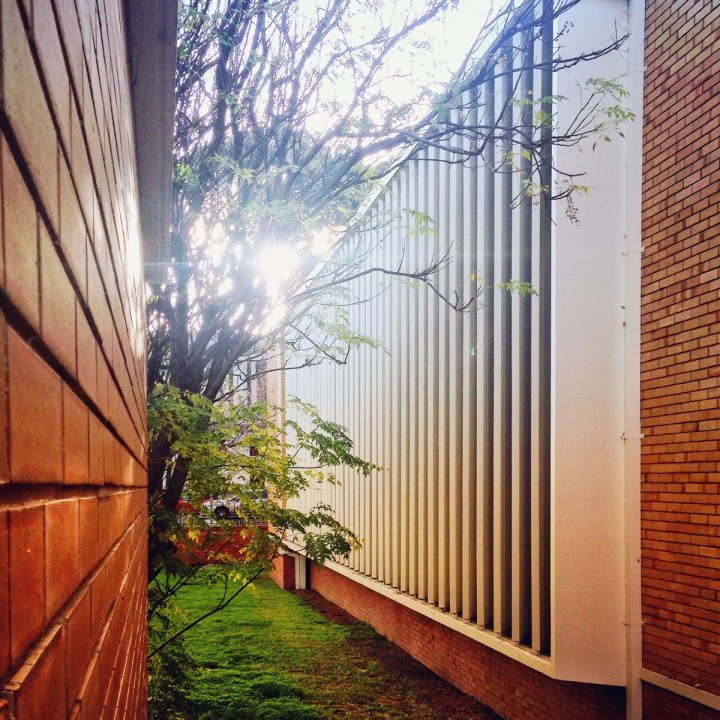 The Church of the Holy Name, in St Peters, was built in the late 1950s. Photo: Stuart Symons 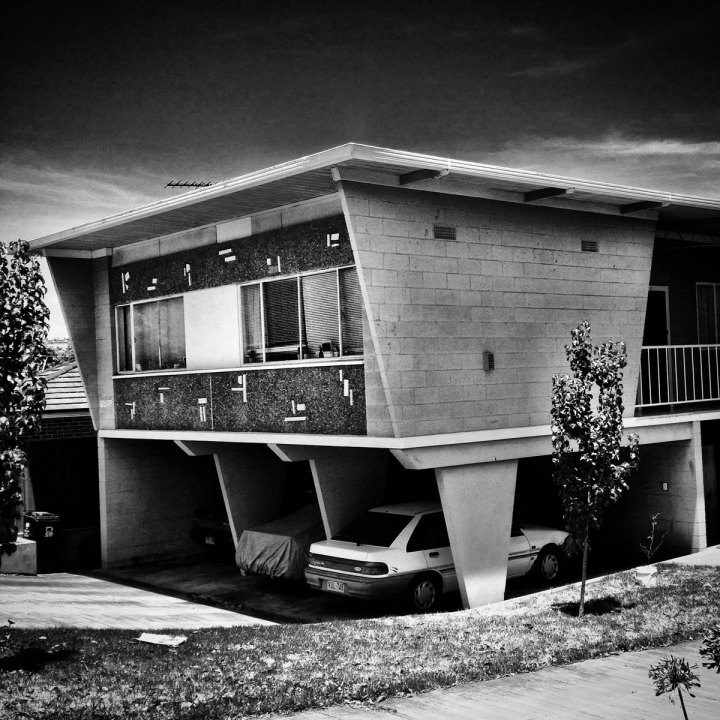 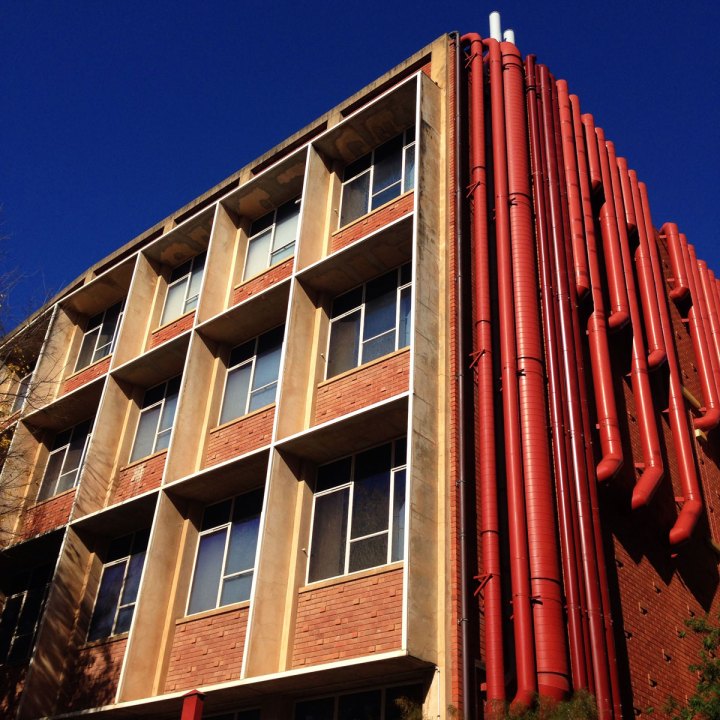 Badger Laboratories, on the University of Adelaide’s North Terrace Campus, was built in the 1950s. Photo: Stuart Symons 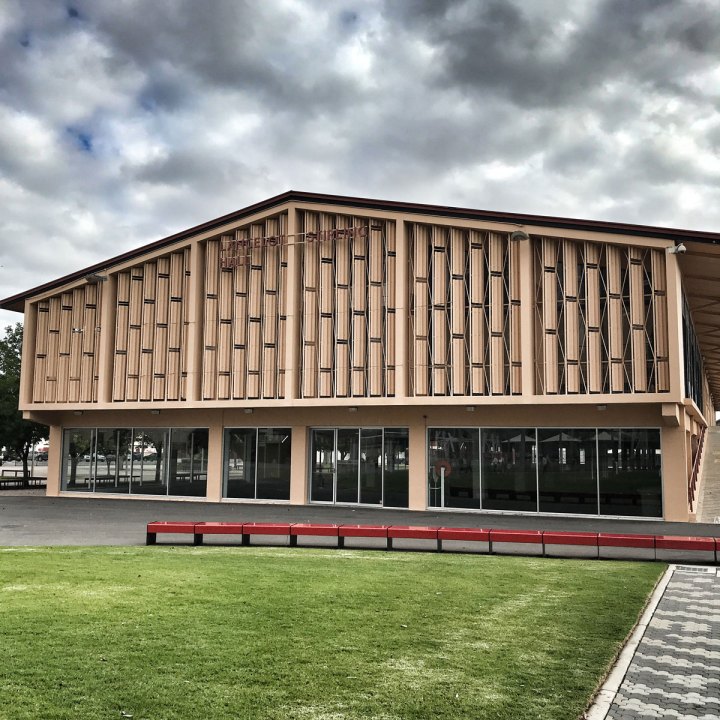 Arcade Restaurant at Adelaide Showground – ‘In its 1950s heyday, this large hall was used as a cafeteria during the Royal Adelaide Show and for balls, dinners and exhibitions at other times’. Photo: Stuart Symons