The Business SA – William Buck Survey of Business Expectations, released overnight, painted a bleak picture, with confidence plummeting to a record low of 71.6 points in the three months to the end of September.

It comes amid continued land tax uncertainty, with the lobby group yesterday joining a raft of interest groups – including the Property Council, the Motor Trade Association, Master Builders SA and the UDIA – for a briefing with key crossbencher John Darley about the Government’s latest efforts to water down its contentious land tax reforms.

InDaily revealed yesterday that Treasurer Rob Lucas has floated a new $10 million fund to compensate investors whose land tax bills are set to skyrocket under his mooted aggregation crackdown.

The measure, effectively a limited form of grandfathering for the new regime’s first year of operation, will be capped at 50 per cent of an individual’s land tax increase, and will include strict criteria on who can apply.

But InDaily has been told Lucas has also flagged several more compromise proposals, including a $20 million affordable housing initiative offering grants for people in state housing to purchase their own homes and a possible reduction of the ‘middle tier’ land tax rate from 1.65 per cent to 1.4 per cent.

“I think it’s rubbish… and it’ll take a lot to convince me otherwise,” he said.

He said the interest groups present yesterday were set to come back with a considered view but “my general opinion was the majority of those were not impressed”.

Anthony Penney, Business SA’s executive director of Industry and Government Engagement, emphasised that impression, saying “our views pretty much stay the same” as they had before.

“We’re all gravely concerned about the revaluation side of things if the Government is going to pursue land tax aggregation,” he said today.

He said “the uncertainty around land tax and around the revaluation initiative [by the Valuer-General] has played a key role in the downturn in business confidence in the state, as well as business conditions”. 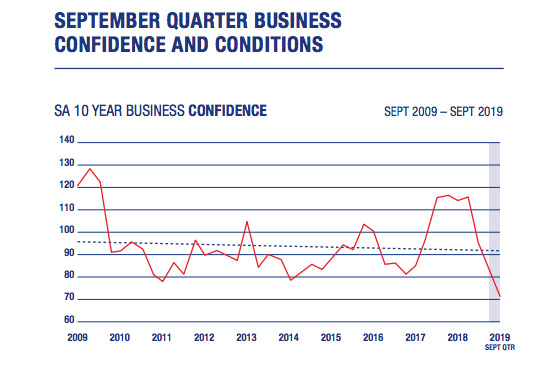 The survey shows the worst business confidence conditions on record.

“This whole land tax roadblock creates enormous amounts of uncertainty, and we know with uncertainty there’s a decline in confidence… businesses are less likely to invest, to take on new employees,” he said.

He said there was a “real confluence of issues” contributing to the malaise, including ongoing high unemployment and soaring petrol and utility prices.

“Retail sales are down for a significant portion of businesses, profitability is down, capital expenditure on building is down, labour costs are up, costs of materials are up… all of these things are impinging profitability, which goes into the confidence pot,” he said.

Penney conceded the state government “only has so many levers they can pull” but added “they’re important levers”.

Asked what the priority should be, he said: “Sort land tax out.”

“Create that certainty, which will allow business to know – one way or another – what they’re up for in future,” he said.

Asked whether it was better to go back to the existing regime, he said: “SA’s land tax regime is definitely not competitive when you compare us to our counterparts interstate, and that’s of concern [but] businesses are telling us they just need to know what the government is going to do, and how can they plan accordingly”.

“We’ve spoken to builders that have put a stop-work on projects, which means there’s no tradies on site,” he said.

The land tax Bill will come before the Upper House today but is unlikely to reach a vote this week, meaning the uncertainty will likely linger until the next sitting period in a fortnight.

Lucas did not respond to inquiries this morning, but Skills Minister David Pisoni today noted the business survey figures were “volatile” and had “come from a record high”.

“We have a record number of South Australians in jobs at the moment – we have 9000 additional full time jobs since the election – these are the real figures,” he said.

SA Best MLC Frank Pangallo said the business sector’s confidence would continue to deteriorate until the proposed new legislation was pulled, declaring the compensation fund proposal was “finally an admission by the government that people are going to be hurt”.

“There is no detail about how the fund will work or who it will apply to and whether people will pay tax on any compensation they receive,” he said.

“This is poor policy – plain and simple – and desperate policy on the run, showing just how desperate this government is to see its land tax reforms passed by parliament.

“Not in its current form it won’t.”