InDaily reported yesterday data from the Adelaide City Council that showed since 2012, only five of 25 new residential developments in the city adhered to a State Government requirement to include at least 15 per cent affordable housing.

Under the guidelines, affordable homes – priced under $354,000 – must be offered to low-income earners and social housing providers for 30 days before the housing can be released to the open market.

The policy was introduced in 2012 and aims to address the state’s growing rate of housing stress, which, according to the Productivity Commission, impacts 35 per cent of South Australians on low incomes.

But developers are currently able to contest the requirement if they show a “clear planning rationale” as to why they cannot meet the target.

It comes as the Adelaide City Council will tonight debate whether to develop a new social and affordable housing policy, with one of the proposed ideas to mandate the 15 per cent inclusionary zoning target.

Greens MLC Mark Parnell told InDaily this morning he would lodge questions in Parliament this week calling on the State Government to fix what he described as a “failed” inclusionary zoning policy.

He said he would also call on the State Government to make public “Land Use Agreements”, which outline affordable housing concessions for developers.

According to Gerace “broader societal issues” such as housing affordability needed to be addressed with the “significant funds” of government, rather than private developers.

“Rather than just mandating a price and shifting responsibility to one part of the private sector, which we think is quite crude, there needs to be a proper commitment by all levels of government about providing for people that are in most genuine need,” he said.

“Broader housing affordability should not be dealt with through the imposition of policies like inclusionary zoning, which is essentially a cross subsidisation by other home buyers.

“We also need to be very careful because these policies may render some projects undeliverable under certain economic conditions, and therefore further restricting supply and the benefits that flow from investment.”

Gerace said there was a “bad assumption” made by proponents of inclusionary zoning that property developers received an uplift when the State Government rezoned land.

“This fails to recognise that the uplift is actually going to the owner of the land and these are distinctly different,” Gerace said.

“It’s an easy target and this discussion by some Adelaide City Councillors is another example.”

The Property Council is equally dismissive of the idea, with SA executive director Daniel Gannon likening a mandated inclusionary zoning target to a “sledgehammer to the development industry”.

“If the City of Adelaide thinks the answer to smart planning is mandating this affordable housing policy, then they’re asking the wrong question,” he told InDaily

But Parnell pointed criticism at the development sector, saying the Government needed to change its inclusionary zoning policy to ensure developers who had been granted concessions on the proviso that they would deliver affordable housing were held accountable.

“Clearly this policy has failed to deliver any affordable housing in Adelaide,” he said.

“It would be particularly egregious if developers have been granted concessions on the back of promised affordable housing which they never deliver.”

In response to questions from Parnell last month, Treasurer Rob Lucas said the South Australian Housing Authority had advised that developers were “meeting their affordable housing obligations under the current planning system”. 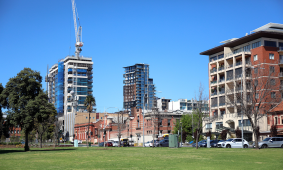 “The Minister for Planning holds a register of all land management agreements that have been entered for the purpose of mandating the delivery of affordable housing,” Lucas said.

“The content of these land management agreements is confidential and not available publicly.”

According to the city council, since 2012 about 345 affordable apartments in the city should have been delivered through the inclusionary zoning process and sold to low-income buyers.