According to the Walking SA analysis, 289 traffic incidents involving a pedestrian occurred in the Adelaide City Council area between 2013 and 2017, making it the top-ranking council for pedestrian crashes in the state.

Pedestrian crashes are most likely to occur on Wednesdays and Fridays at 3pm, with the majority occurring on streets with 50km/h speed limits.

According to the State Government’s road safety strategy, a person’s chance of surviving being hit by a car double if the speed of the vehicle is reduced by 50km/h to 40km/h.

Walking SA is using the data to advocate for the Adelaide City Council to reduce its default speed limit from 50km/h to 40km/h, arguing the high frequency of pedestrians in the city means the council has a responsibility to take extra precaution when considering people’s safety.

“The main reason for the high rates in the city is because there are so many pedestrians in the city and high numbers of vehicles as well,” Walking SA board member and Bicycle SA chair Ian Radbone told InDaily.

“That doesn’t necessarily mean that, per person or per vehicle, it’s more dangerous, but because there are so many more (pedestrians) you get so many more crashes.

“You’re obviously going to be doing the sensible thing if you reduced the speed in the area that has the most number of crashes.” 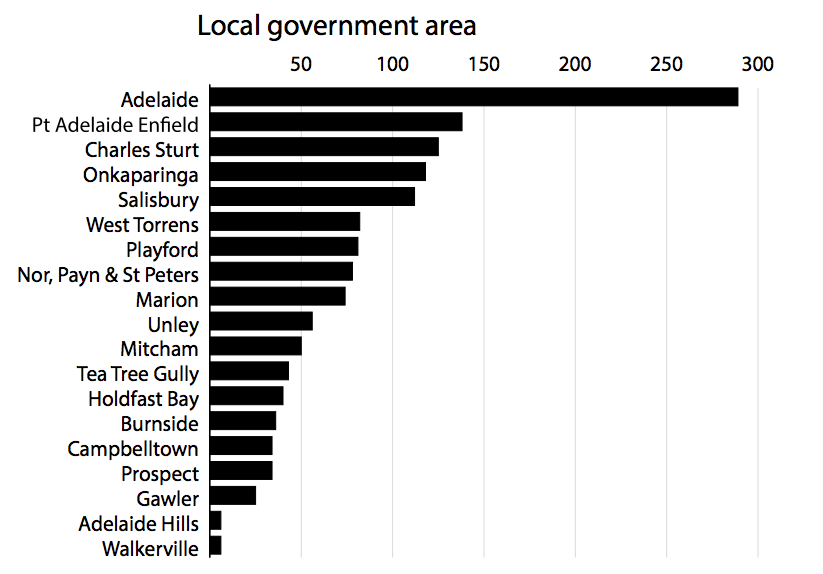 Radbone said reducing the city’s speed limit to 40km/h would bring it in line with other city-fringe councils, including the Cities of Unley, Prospect, Charles Sturt, Norwood Payneham and St Peters and Walkerville – all of which have introduced at least some 40km/h zones in built-up areas.

The Adelaide City Council mostly sticks to 50km/h default speed limits, with some exceptions including around Victoria Square, the western end of Hindley Street and designated shared use zones.

“We at Walking SA want to see consistent 40km/hr entirely in the CBD – not just in one area – because if you’re constantly changing the speed limits it does get confusing,” Radbone said.

“We’re all for lowering speeds in high pedestrian areas and in quieter streets as well.” 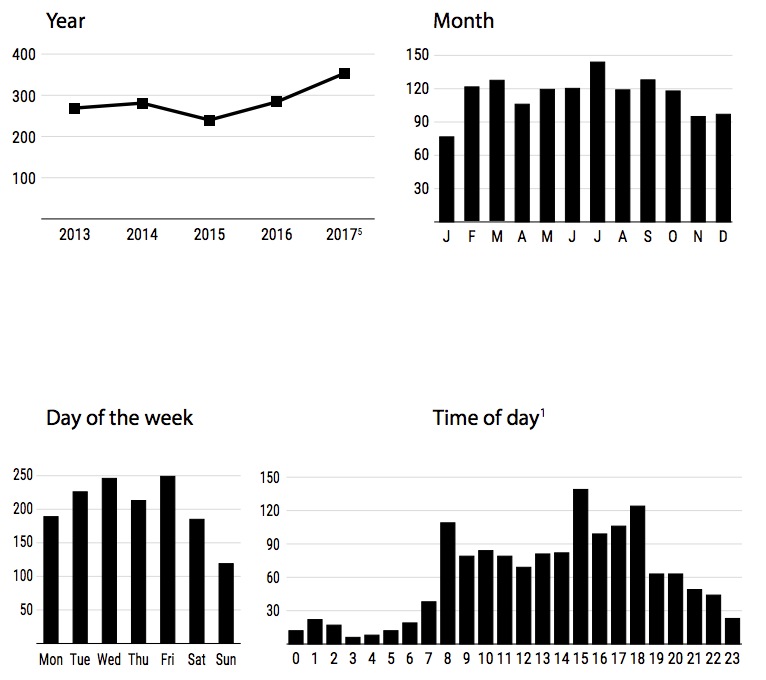 Traffic crashes involving a pedestrian in South Australia from 2013 to 2017 by year, month, day of the week and time of day. Graphs: Walking SA using data from the SA Traffic Accident Register

The call has won support from RAA, with senior road safety manager Charles Mountain telling InDaily “it’s probably a good opportunity to review speed limits now to see where they can be reduced”.

He said capital city councils along Australia’s eastern board had already moved to reduce their default speed limits to at least 40km/h, with the City of Melbourne deciding in April to introduce a 30km/h speed limit in its CBD.

“Once upon a time such things were uncommon, now they’re becoming more commonplace and I think generally speaking people, particularly those who travel interstate, would be aware that the busier precincts in other cities already have lower speed limits to reflect the high levels of pedestrian activity,” he said.

“It’s not surprising that there’s some sort of discussion about doing the same sort of thing in Adelaide, certainly in areas with high levels of pedestrian activity and other factors taking place where it’s appropriate to look at where a lower speed limit could be introduced.” 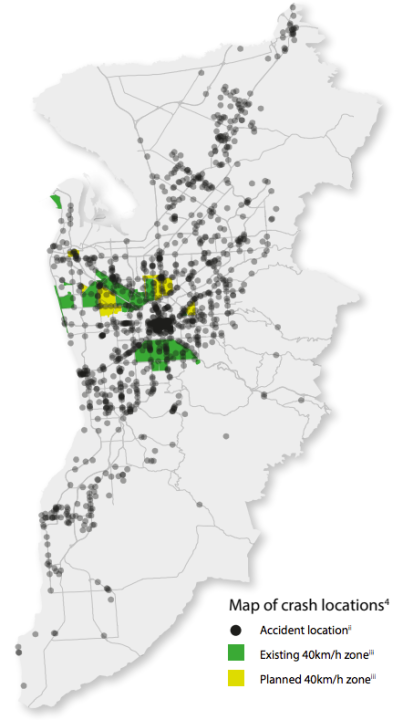 The Adelaide City Council copped backlash in 2014 for trialling a 40km/h speed limit along Hutt Street in line with former Lord Mayor Stephen Yarwood’s broader plan to slow traffic speeds across the city.

A survey conducted by the council at the time showed the lower limit had limited public support, despite the State Government, road safety experts, cycling groups and a local school all supporting the move.

“Generally our view has been where there is a high level of pedestrian activity, lower speed limits are appropriate,” Mountain said.

“The critical thing now is where speed limits are proposed to be reduced the road environments are modified accordingly to send the correct messages to drivers because what you want when a speed limit is reduced is good compliance.”

“The city is a transport hub and there are a lot of transport points that do go in and through the CBD, so it is a complex situation in terms of catering for adequate traffic flow whilst still ensuring health and safety is the highest priority,” she said.