Councillors claim it is the nation’s first capital city to consider such a register.

The original motion – lodged by councillor Robert Simms – called on councillors to support the regular disclosure of elected member contact with developers on an online public register, similar to a model currently used by the City of Vincent in Western Australia.

It also asked the council’s administration to develop draft guidelines by December this year outlining how such a register could operate.

Simms argued that the register was needed as “faith in our democratic institutions is at a low and that is because of the perception that vested interests have an influence over the democratic process”.

“This developer register is another layer of transparency that could be added to ensure that members of the public have more faith and confidence in councillor decision-making,” he said.

But Abiad changed the motion by removing the reference to council’s support for the register.

He then suggested the council “investigate” draft guidelines rather than “develop” the guidelines, as well as investigate improvements to the council’s register of interests.

Abiad argued during two previous debates on the matter that a developer contact register could “deter and cause division in the community” by “demonising” certain ratepayers.

He said last night that he was willing to give the idea “the benefit of the doubt”.

“I’m going to tag along for this a little bit to see if we get some consensus,” he told the chamber.

Abiad refused to entertain suggestions from non-Team Adelaide councillors that his amendment indicated a backflip, declaring the changed proposal as “a very different motion”.

“Councillor Simms’ intent was to support the regular disclosure of council members’ contact with developers, my intent is not,” he said.

“Without the development sector, without the construction sector that is consistently spending money and investing money in the City of Adelaide we will not see growth.

“This is a sensible approach to a motion to investigate before we make a decision.”

During the debate, non-Team Adelaide affiliate Phil Martin argued that the register was needed as discussions with developers “go on all the time and to not have the transparency of a register like this is to simply turn a blind eye to it”.

He said the “entire council” had been invited to attend a meeting with a hotel developer on Friday.

Martin was also accused by Lord Mayor Sandy Verschoor of breaching confidentiality by revealing that the council had recently been asked to commit to a development plan costing in the vicinity of $25 million.

According to the council, over 90 per cent of development applications are delegated to the council’s administration for decisions, with the remaining applications judged by the Council’s Assessment Panel, on which one elected member – currently Anne Moran – sits.

Any developments valued above $10 million are referred to the State Commission Assessment Panel.

Moran argued that not having a register could “bring great clouds of doubt over certain councillors”.

“Often – and there’s nothing we can do about it – councillors are swanning off and going and seeing developers,” she said.

“I’ve certainly seen it in relation to our buying of 88 O’Connell Street, for instance.”

But Team Adelaide affiliate Franz Knoll, who opposed Abiad’s amendment, said councillors could be caught inadvertently meeting with developers or people associated with them.

“What would happen if I went out and I happened to meet the wife of a developer and I didn’t know who she was in the first place?,” he questioned.

Independent councillor Jessy Khera, who voted in support of the amendment, similarly raised concerns about the scope of the guidelines. 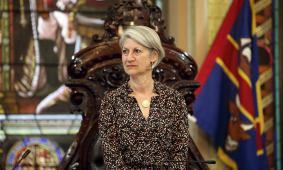 Lord Mayor Sandy Verschoor told InDaily on Monday she was “disappointed” the motion had been brought up a third time.

She said last night that the motion “could be construed as politics rather than policy” as there was already “significant legislative levers” in place to ensure councillor transparency.

Abiad’s amendment was carried with the support of all councillors except Knoll and Arman Abrahimzadeh.

“I think some of us had to be dragged to the finishing line but we got there in the end,” Simms said.

“The fact that no other city council in the country does this, I think, is another reason for us to champion this kind of reform.”