The Sydney-based company is hoping to roll out an initial fleet of about 20 to 30 bikes in Adelaide by the end of this month, with that number set to rise to about 200 bikes by the end of the year.

The company, which already operates a fleet of about 250 dockless bikes in Canberra, was granted permission by the Adelaide City Council to start operating in January.

Airbike initially planned to launch in time for March’s festival period – coinciding with the rollout of electric scooters in Adelaide – but the company has cited ongoing problems with its overseas bicycle manufacturer for the months-long delay.

Its impending arrival comes after two other bike-share companies – Ofo and Obikes – copped backlash from residents and some councillors over dumped and abandoned bikes left strewn about city streets.

Airbike operations manager Matthew Creen told InDaily the company was hoping a “slowly-slowly” approach to the Adelaide market would help it avoid the mistakes of its two predecessors.

“We know that the way that other businesses came into the market, it was sort of more ‘let’s dump and run’ attitude to the market entry,” he said.

“If we do the slow approach into the city as opposed to the major dump, we can actually provide a service that the community wants to use as opposed to just throwing bikes at people and ruining their cityscape.

“That’s where we think there can be a change in behaviour in terms of how people view that service, but it has to be implemented correctly.”

Airbike works via a mobile app, with each bike fitted with a QR code that, when scanned, allows users to unlock the bike and start riding for a charge of $1.30 per half hour.

Users are able to locate where Airbikes are located via a map, as well as top up their “wallet” to fund journeys.

The company’s permit restricts bike use to within the Adelaide City Council boundary, however, unlike e-scooters, the bikes will not be geo-locked to prevent use outside the prescribed area.

A council spokesperson said Airbike would be responsible for ensuring bikes were kept within the council area, and for picking up the bikes if cyclists ventured outside the boundary.

Airbike will employ two people to manage the initial 20 to 30 bikes in Adelaide, with its Adelaide workforce set to grow as more bikes are added to the fleet.

“Their jobs will be to make sure the fleet is maintained and to make sure that if any of the bikes are in the wrong locations they will be put in the right locations,” Creen said.

“As we scale up we will probably be putting in more people to make sure that everything is all working fine and operating as it should be.” 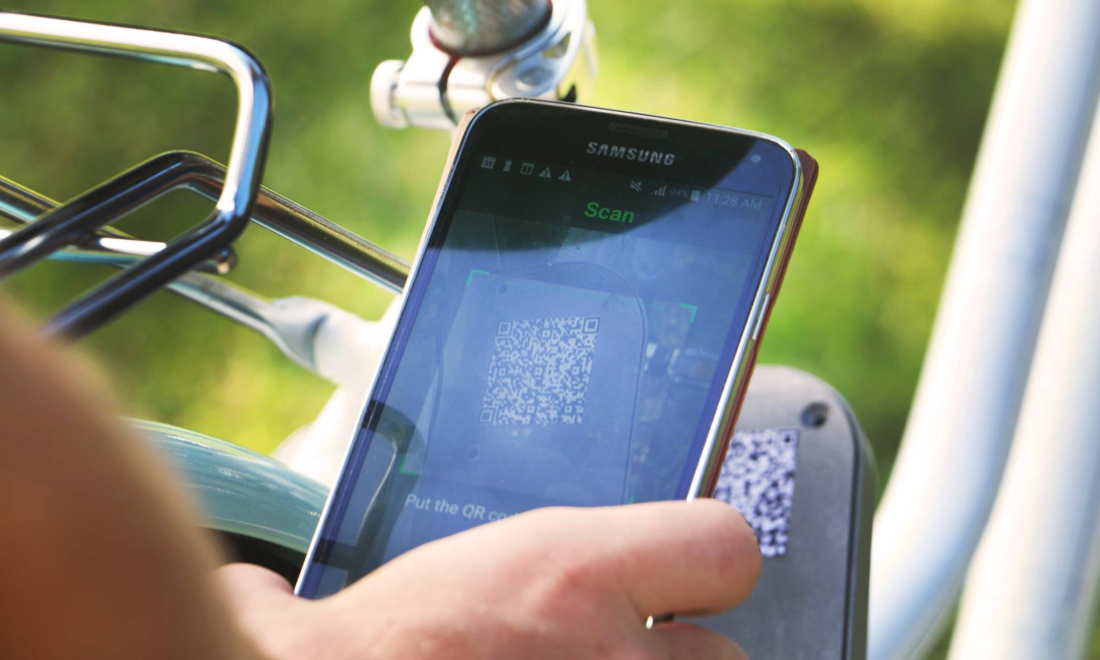 Scanning a QR code on the Airbike app unlocks the bikes. Photo: Airbike

Creen said after initial launch in Canberra last July, Airbike looked to Adelaide as an entry-point to the “large-scale” city market.

He said Adelaide was an attractive city given its flat terrain and population size.

“There’s certain characteristics of a city that we look at in market entry – is there a population size, is there a need for this or has there been any demand, what’s the public transport situation like?

Creen claimed the company was unfazed by the recent success of e-scooters – first during the Lime e-scooter trial in March and April, and currently with Melbourne-based company Ride and Singapore-based company Beam.

“Some people like scooters, some people would prefer a bike,” he said.

“Scooters are good for short distances – if you just want to go around the corner – whereas with a bicycle you can do a little bit longer.

“It can also be an age demographic thing.”

“Last time there were a bike-share companies in the city it had a demonstrable impact on increasing mobility across the city,” she said.

“Just like with the scooters, what’s happened is people have expanded their regular footprint, so people are more likely to just pop over to the markets and do some shopping at lunchtime, or go to cafes that they wouldn’t usually go to, because they have an easy way to reach long distances.”

Lord Mayor Sandy Verschoor also welcomed the return of a bike-share operator to the city.

“The CBD and North Adelaide are great areas for cycling and I’m sure Airbikes will be popular with city workers, students and visitors,” she said.

“Bike-share is a fun, low-cost and sustainable form of transport that’s ideal for short trips around the city.”

The current Adelaide bike-share scheme, Adelaide Free Bikes, which is operated by BikeSA and funded by the council, is expected to wrap-up once Airbike starts operating.