Lake Eyre, in South Australia’s north, is the country’s biggest lake and the thirteenth largest in the world when full. It is also the lowest geographical point of Australia, at 15m below sea level.

The usually dry lake system – believed by early European settlers to be home to an enormous inland sea – only fills about four times a century.

The last time it was full was 1974 but water from tropical cyclone Trevor and wet season rains in outback Queensland are flowing to the lake through a network of rivers that drain into a basin covering a sixth of Australia – about the size of Spain.

Officially known as Kati Thanda–Lake Eyre, the lake is about a third full with water levels expected to reach a peak – the highest level in more than 25 years – next month.

This has sparked a rare greening of the desert and attracted thousands of birds to an area that is usually among the driest, most inhospitable places on earth.

It is also attracting adventurous sailors from the Lake Eyre Yacht Club, who will compete in a unique outback regatta this week.

Dozens of adventurers have headed to the Outback Spirit Lake Eyre Yacht Club Regatta this week.

The Bureau of Meteorology national flood services manager, Alex Cornish, said the 9500-square-kilometre lake would reach 50 per cent of its capacity in May – its highest water level since the early 1990s.

He said natural factors such as evaporation and the 1000km journey of the floodwaters through Channel Country to Lake Eyre made the event a rare natural phenomenon.

“What can happen is that there will be rain but not enough of it, so it evaporates or it just soaks into the ground and it never makes it so it’s quite a rare thing to see the floodwater fill the lake.

“The floodplain that has already received water is vibrant green and bursting with life, and it’s set against the brown, which is the earth.

Time lapse satellite imagery shows the movement of water down from Queensland
towards Lake Eyre and the greening of the Channel Country. Images courtesy of NASA.

Lake Eyre has been identified by BirdLife International as an “Important Bird Area” because it acts as a major breeding ground for many bird populations when flooded, including Australian pelicans, gulls, sandpipers and terns.

Small fish and crustaceans are usually found in Lake Eyre too and provide an important food source for the migratory birds.

Early European explorers to Australia were confident they would find a vast inland sea in the middle of the dry continent.

In 1840, Edward John Eyre was the first European to lay eyes on the huge lake, which now bears his name. But as for the inland sea, Lake Eyre was bone dry.

Intrepid tourists from around the world are still attracted to the area, particularly when the basin is in flood.

The tiny Oodnadatta Track township of William Creek – which basically consists of an outback pub and an airstrip – is the closest settlement to Lake Eyre.

Publican, pilot and Wrightsair owner Trevor Wright has operated charter flights in the region since 1992 and said the speed and volume of this year’s floodwaters had been greater than expected.

He said water had started to move into Lake Eyre in mid-March ahead of the May peak after first filling the Goyder Lagoon closer to the Queensland border.

Daytime temperatures at Lake Eyre from December to March can reach 45C but drop to about 20C between May and August, which is also the peak time for tourists.

Kalimurina is an Australian Wildlife Conservancy sanctuary at the intersection of three of Australia’s central deserts: the Munga-Thirri-Simpson Desert, the Tirari Desert and Sturt’s Stony Desert.

It stretches 140km from Lake Eyre to the southern boundary of the Simpson Desert, totalling almost 700,000 hectares.

Australian Wildlife Conservancy CEO Tim Allard said he expected the number of national and international tourists flocking to the region to reach 2000 in the coming months.

“That may not seem like a lot to most people, but in such a remote part of Australia where you might go 12 months with seeing only a handful of people to get a couple of thousand is a lot,” he said.

“When you see the water eventually making its way to Kathi-Thanda Lake Eyre, across the cracking clay soils, filling all those little cracks and rivulets across the expanse of Lake Eyre, it’s nothing short of a miracle.

“You’re wondering how things can live out there and there’s water flowing through the creeks and birds flying around, and it’s just a stunning transformation.

“Lake Eyre is one of those once in a lifetime events where people should get out there and have a look.”

The outback town of Marree is the last major stop for visitors travelling towards the Birdsville Track, east of Lake Eyre, from Adelaide.

Marree Hotel manager Joe Calvert said the natural palette of the region during flood was also a drawcard.

“You don’t get these colours anywhere else – reds and browns,” he said. 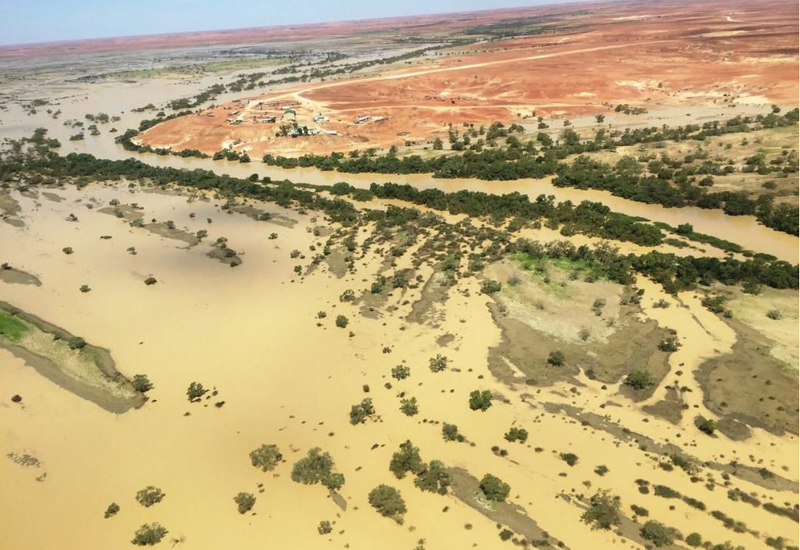 “The change in country from when you drive north from south, through the Barossa, you go through the Flinders Ranges to get up here. It’s a pretty stark contrast.

“This year the number of travellers will spike around June, July, for sure.

“That big flood was pretty devastating for Queensland but it helped us because it filled the lake so it will give us a good tourist season.”

Coward Springs Campgrounds is situated southwest of Lake Eyre and is surrounded on all sides by 10km of Kadarbu Conservation Park.

Campgrounds owner Prue Coulls said the region surrounding Lake Eyre was one of Australia’s best natural landscapes, and that the filling of the lake was an important tourism attraction.

“We want everyone to appreciate what it is and immerse themselves,” she said.

“We’ve had a lot of inquiries into bookings, specifically after the filling of Lake Eyre.”

“The outback can either look amazing with flowering native plants and greenery or absolutely devastated because there is no rain.

“But because there will be water going into the lake that means people will be brought to the region to see its beauty.”

According to the latest Department of Planning, Transport and Infrastructure report, the rugged Oodnadatta and Birdsville tracks are open to Lake Eyre. However, the floodwaters have caused the temporary closure of the Birdsville Track between Mungeranie and Birdsville, which is a 275km section of road to the east of Lake Eyre up to the South Australia/Queensland border. The closure will impact tourists attempting to reach Lake Eyre from Queensland but visitors driving to the lake region from Adelaide should not be affected at this stage.