The Liberals made an election pledge to legislate to allow Independent Commissioner Against Corruption Bruce Lander to hold open investigations into maladministration matters – a step for which he has repeatedly called.

But the initial Bill was modified after a review by parliament’s Crime and Public Integrity Committee, adding safeguards including the right to appeal the process to the Supreme Court that Lander has argued would effectively preclude him from ever holding public hearings.

He also took public aim at a series of 29 Labor amendments, bolstering protections for public officers facing maladministration allegations – including giving them the right to refuse to give evidence, and their lawyers the right to cross-examine witnesses.

But several of the Labor amendments passed parliament’s Upper House last night – despite opposition from Government MLCs – with crossbench support.

That’s despite Lander personally fronting crossbench members last month to outline his concerns with the legislation.

The outcome sends the Bill back to the Lower House – where the Government must now decide whether to pass it in its current form or kill it off altogether.

Either way, the prospect of open hearings appears doomed, with Lander today standing by his previous assertions in correspondence, when he wrote that “the ICAC bill has serious flaws” and would preclude him holding open hearings – even before the Labor amendments.

In a statement to InDaily today, Lander’s office said: “His view is unaltered.”

The threat to withhold open hearings – and the prospect of the whole Bill being abandoned – prompted Greens MLC Mark Parnell to call for the $15 million allocated in last year’s budget for open hearings to be scrapped.

“If it turns out that, as a result of the passage of this bill as amended… there are no public hearings, then I would like the Government to revisit their decision in the last budget to allocate an additional $15 million to the ICAC to facilitate public hearings,” he told parliament.

“If there are not to be any then they do not need that money, but certainly others do. We know that there are other crucial legal services that are being starved of funds. An additional investment of $15 million into community legal centres or the Legal Services Commission would go a long way to meet the unmet need of disadvantaged people in the community for legal services.”

Attorney-General Vickie Chapman told InDaily: “What happened in the Legislative Council last night is clear proof the Labor Party are completely allergic to transparency and will do anything to sabotage public hearings in matters of serious and systemic maladministration and misconduct – this, after months of using delaying tactics and unworkable proposals to stifle the Government Bill.”

“Peter Malinauskas and the Labor Party should know better after the Oakden and Gillman scandals, which when investigated by ICAC, did not have the ability to conduct open hearings to ensure those involved were accountable and the investigation… was transparent for South Australians,” she said.

“The Government will now be carefully considering the problematic amendments which passed the Legislative Council last night, and their detrimental impacts on the broader role of the ICAC before this Bill returns to the House of Assembly.” 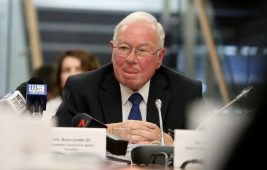 ICAC at odds with both parties on open hearings

Labor’s Shadow Attorney-General Kyam Maher said “it’s now up to the Government to decide whether they accept the amendments the Legislative Council made, in which case the Bill is law – or give the whole Bill away”.

“It really is in the Government’s court,” he said.

But InDaily has been told his motion did not even garner a seconder.