The Liberals have maintained a mantra of steady public sector reform, but financial data provided by the Government to InDaily shows as many as 17 senior bureaucrats were shown the door within three months of the administration taking office.

Between March 19 – the first business day after the state election – and the end of the financial year on June 30, the Government tallied up a total bill of $4,642,481.45 in contract payouts.

However, that total does not include leave entitlements – including long service leave – which insiders estimate would have added millions more to the taxpayers’ bill.

It includes around $1.7 million in contract payouts to the four chief executives sacked within the first week of Steven Marshall’s premiership – including his own departmental chief Don Russell, the man previously handpicked by Jay Weatherill to oversee the new State Development agency in 2014.

Under law, CEOs are appointed at the behest of the Premier, but other executive positions are determined by the head of the relevant agency.

It can also be revealed that an additional 13 executives were sacked before the end of the financial year, with the purge affecting 14 agencies across government, including the Central Adelaide Local Health Network, SA Tourism Commission and TAFE SA. 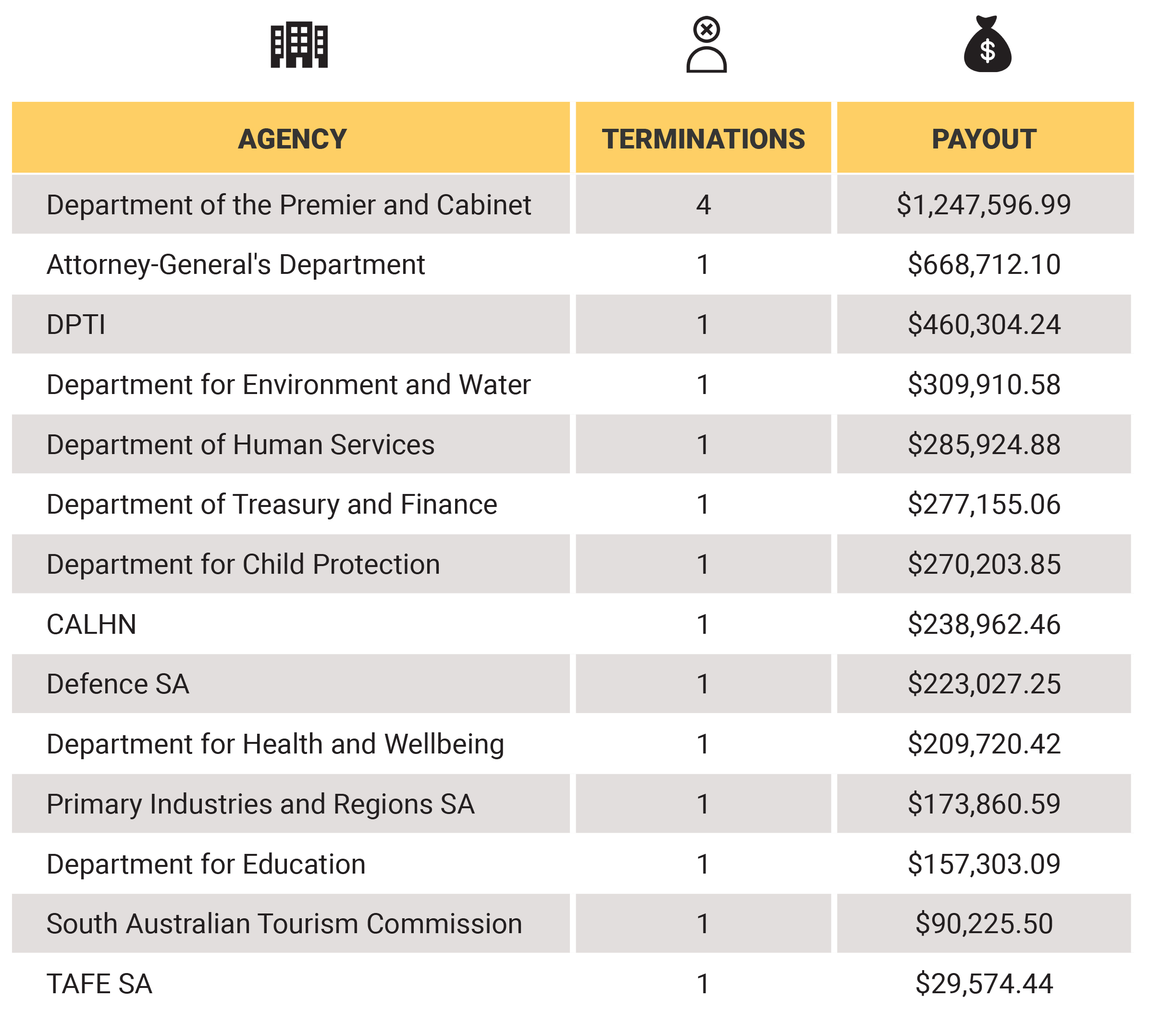 It’s believed the fourth person identified as receiving a payout from the Premier’s Department is former ICT Programs manager Stephen Oster, whose role was initially terminated under the previous Labor Government for “organisational reasons”.

A departmental spokesman said Oster “was engaged in 2016 to support the procurement and transformation activities associated with the End User Computing (EUC) project”.

“In line with the EUC project transitioning into the execution phase, the former Chief Executive [Russell] advised Mr Oster in writing on 18 January 2018 that his duties were no longer required to be performed for organisational reasons,” the spokesman said in a statement.

“Following the provision of a notice of intention to terminate and procedural fairness processes, the former Chief Executive terminated Mr Oster’s executive employment with a period of notice. Mr Oster’s separation date was 31 May 2018 and he was entitled to receive termination payments under Section 44 of the Public Sector Act 2009 and clause 12 of his executive employment contract.”

It’s understood the End User Computing project transferred from DPC to Treasury from July under the Liberals’ machinery of government changes.

However, the taxpayers’ bill will have climbed further since June, with the published total not including Arts SA executive director Peter Louca, who was sacked in August amid a restructure of the agency’s administration.

Marshall told InDaily last month his Government wanted “to work with the public service” but added: “We just don’t think it was particularly well-led.”

“We don’t have this ideological problem with the public service… it’s not an ideological war,” he said.

“But we’ve outlined the efficiencies we expect in the budget, and we’ll do that in a respectful way.”