The State of the Park Lands report, presented to the city council last night, shows an extended history of public institutions claiming an increasing share of the 930 hectares of vegetation that Colonel William Light reserved as Adelaide’s park lands.

In 1983, according to the report, a seemingly inexorable decline of open green space in the park lands turned around.

Public institutions continued to occupy a growing proportion of the park lands, but green space was returning. 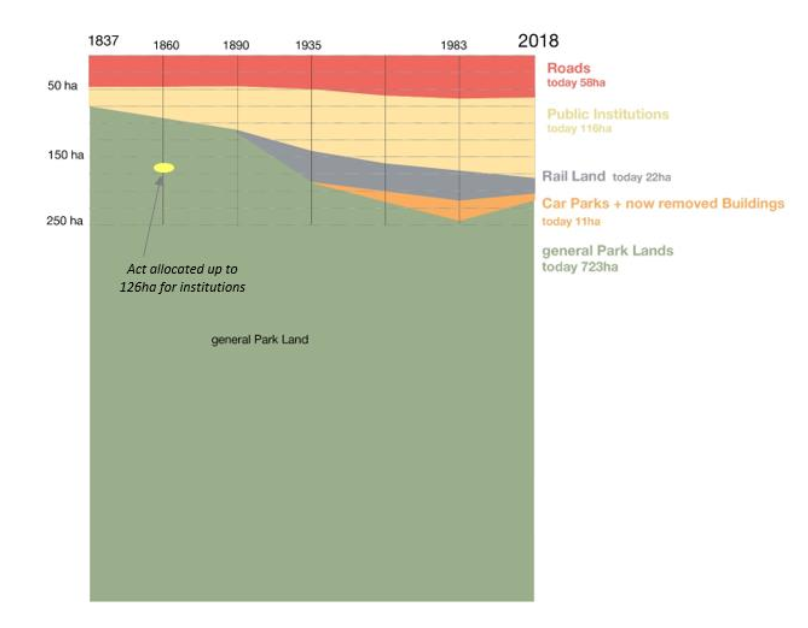 In the past 35 years, according to the report, various governments have returned just over 20 hectares worth of land to park lands – removing a series of buildings and car parks, a public transport depot on Hackney Road and an SA Water depot on Park 25.

These green space gains have been offset by what park lands advocates describe as “alienations” including the construction of the New Royal Adelaide Hospital and medical precinct along North Terrace, the Adelaide Oval redevelopment and the expansion of the Adelaide Festival Centre to occupy more of Elder Park.

According to the council report, these developments have reduced the figure to a net gain of 18 hectares since 1983.

But sports buildings and facilities, restaurants, kiosks and paths are not considered “as a loss of parklands” in the report

Councillor Phil Martin argued that sports facilities and restaurants are “no longer available to the public” and should be counted as losses of parklands.

“Our calculations suggest there’s about seven tennis courts (worth of former parklands space) a year being lost since the parklands were established.”

However, according to an APPA newsletter on the subject, that calculation accepts the council report’s claim that 18 hectares have, in fact, been returned to parklands sine 1983.