Haese insists he is “not concerned” by the fact that Adelaide City Council will not be able to meet the June 2018 deadline to build the east-west bikeway – planned for Flinders and Franklin streets – and the north-south bikeway – for Frome Street – as required by its co-funding deal with the State Government.

It will, instead, ask ratepayers along Flinders and Franklin Street – but not other interested parties – only whether they want a bikeway there.

Results of that simplified consultation will return to the council in April 2018 – two months before the east-west and north-south bikeways were both due to be built.

“It’s highly unlikely that the east-west bikeway will be completed by the 30th of June,” Haese conceded to InDaily this morning.

“We’ve got to get this project right … that’s a higher imperative than doing it quickly.

He said he would meet with Transport Minister Stephen Mullighan to discuss the project and ask for more time.

Neither Mullighan nor council staff were able to say whether the funding deal could be amended to accommodate a longer time-frame, or whether missing the deadline was a deal-breaker.

Mullighan told InDaily the council needed to clarify its position, and “if the council is unable or unwilling to proceed with the project as identified then we need to know as a matter of urgency”.

Haese had said, in a statement earlier this morning, that his council “will continue to work in partnership with the State Government on the city bikeways project and values the financial commitment, which is the largest single investment ever made towards cycling in the city”.

Abiad argued that no one trusted the council, following repeated bikeway debacles on Frome Street and Sturt Street, to deliver on its cycling infrastructure and that it had to win over those “most affected” by the project.

He said he had tried to explain to business operators along Flinders and Franklin streets that no consultation or design work had yet been done on the east-west bikeway proposal, but nonetheless there was a “severe level of discontent with the council” because of a false view that the east-west bikeway was already “pretty much designed, dusted, ready-to-go”.

He argued that his motion would assure ratepayers along that strip that no design process had begun.

“It’s really important for them to understand … that we are not designing anything and – if there is a design process – we have stopped the design process,” he told the chamber.

Without winning our ratepayers over, there will be no project.

But North Ward councillor Phil Martin argued the simplified consultation was bound to return a strong ‘no’ vote for the bikeway project given the council’s track record on bikeways projects.

He suggested members of the State Government would be regretting the decision to sign a contract with the council to fund the bikeway – and that the council might not follow the results of the consultation anyway.

“They must be waking up every morning saying: what the hell have we done?”

What the hell have we done entering into that agreement with those monkeys at the council?

He argued that Abiad’s motion was designed to produce a negative response “and place this council in a position where it doesn’t proceed with an east-west bikeway – where it says to the State Government, ‘rack off’”.

“This council is demonstrating a fantastic – a wondrous – capacity to self-inflict injuries,” he said.

Martin expressed scepticism about a “groundswell” of opposition to the east-west bikeway, noting that the council had, also last night, formally received a petition with just eight signatures, opposing the bikeway.

All signatories nominated the Flinders Street Project café as their address.

South Ward councillor Priscilla Corbell told the meeting she would rather the council abandon Flinders/Franklin as the east-west bikeway route – in favour of a different east-west street – than “force” a bikeway on businesses that may not support it.

“If we’re going to go through this process and they say clearly ‘no’, even though we’ve finished Frome Street – a resounding ‘no’ – then we have to go back to the drawing board,” said Corbell.

“But I’d prefer to go back to the drawing board and look at other street options and, again, bring another community through that journey than to force something on a community that clearly don’t want it.”

“I don’t want to have another repeat of the (Frome Street) bikeway fiasco.”

In September, the council approved Flinders and Franklin streets for the east-west route, instead of Pirie and Waymouth streets – judged too narrow – or Grote and Wakefield streets – which contain a bus corridor and higher traffic volumes. 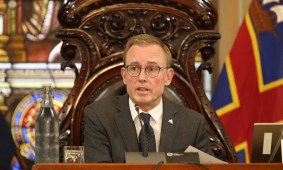 Last year, the council spent $50,000 constructing demonstration models for various bikeway designs for the north-south and east-west project, during an intensive consultation exercise to inform the redevelopment of the Frome Street (north-south) bikeway.

Businesses, residents and design experts told that consultation they did not want Frome Street bikeway demolished and reconstructed – but the council is going ahead with the plan anyway.

This year, the council moved to establish a helipad on the parklands, despite overwhelming opposition revealed in a community consultation on that subject.

Asked how members of the public can be confident the council listens to them, Haese told InDaily the council would receive the results of the pared-down east-west bikeway consultation in April, and consider them in the context of its responsibilities as a capital city council.