Airlie Kirkham sits quietly in the wheelchair that has defined her life for the past 26 years. Her right hand, right foot and eyes are the only parts of her she can move voluntarily. She cannot talk but that right hand and the power of writing it provides has become her window to the outside world.

A gifted pianist, the 25-year-old taught English, music and Japanese at St Peter’s Girls’ School until she lost control of the car she was driving on a dirt road near Balaklava in September 1991.

She sustained a serious brain stem injury and after 12 days in a coma and two months in Royal Adelaide Hospital, Airlie moved to the Julia Farr Centre where she stayed for seven years.

During this time there was debate among many health professionals about whether Airlie was in a vegetative state or simply locked in – a condition where a patient is mentally aware but cannot move or communicate.

“I felt locked in because I couldn’t write or speak,” Airlie writes in her book.

“I could see everything and everyone. I knew who they were. I could hear people talking to me, about me, and saying things I didn’t like.

“I wasn’t asked if I wanted to do something. I was frustrated because I wasn’t in control of myself. I used to wriggle my fingers hoping someone would notice. I wanted to write my message to tell everyone I’m still here. Inside me is Airlie. I have so much to say.”

Then Airlie’s mum Pamela noticed her daughter moving the fingers and soon put a pen in her right hand in a bid to get her writing. 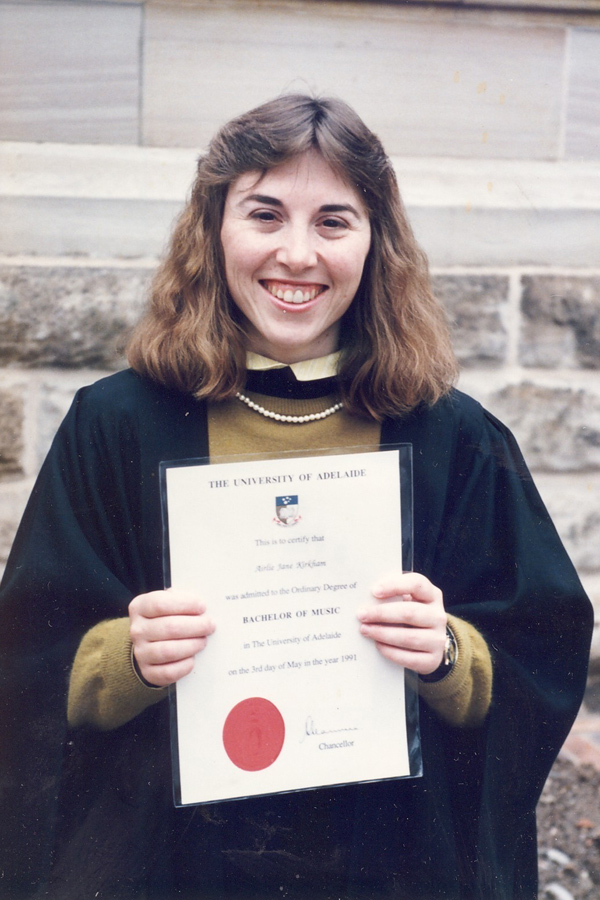 Airlie at her Bachelor of Music graduation just a few months before her accident in 1991.

After several failed attempts and the development of a special splint to help her hold the pen, Airlie began to write in 1997, starting with her name and abbreviations for ‘yes’ and ‘no’ to allow communication to begin. Her writing has since flourished and shows a skill for spelling and grammar not usually associated with someone who has suffered such a serious brain injury.

In 1998, Airlie moved back into the family home where she lives with Pamela and her dad Les.

Writing has become her life and enabled her to return to university to complete an Honours Degree in Musicology at the University of Adelaide in 2005 and a Masters Degree in 2010. Airlie has also written more than 400 poems and will launch her book There is a Light at the End of the Tunnel on Saturday, November 11, at Holy Trinity Church Parish Hall.

“I want to tell the world that miracles do happen and God works them in His own time,” Airlie writes.

“To other families in similar situations, I would say, never give up hope: be strong and determined. These qualities will help them through the difficult times.

“They need to communicate to their loved one because even people in a coma can hear and think. They are sensitive to their environment and need to be aware of their family’s strong hope and faith in them.”

The book will be launched by Emeritus Professor Roger Rees. 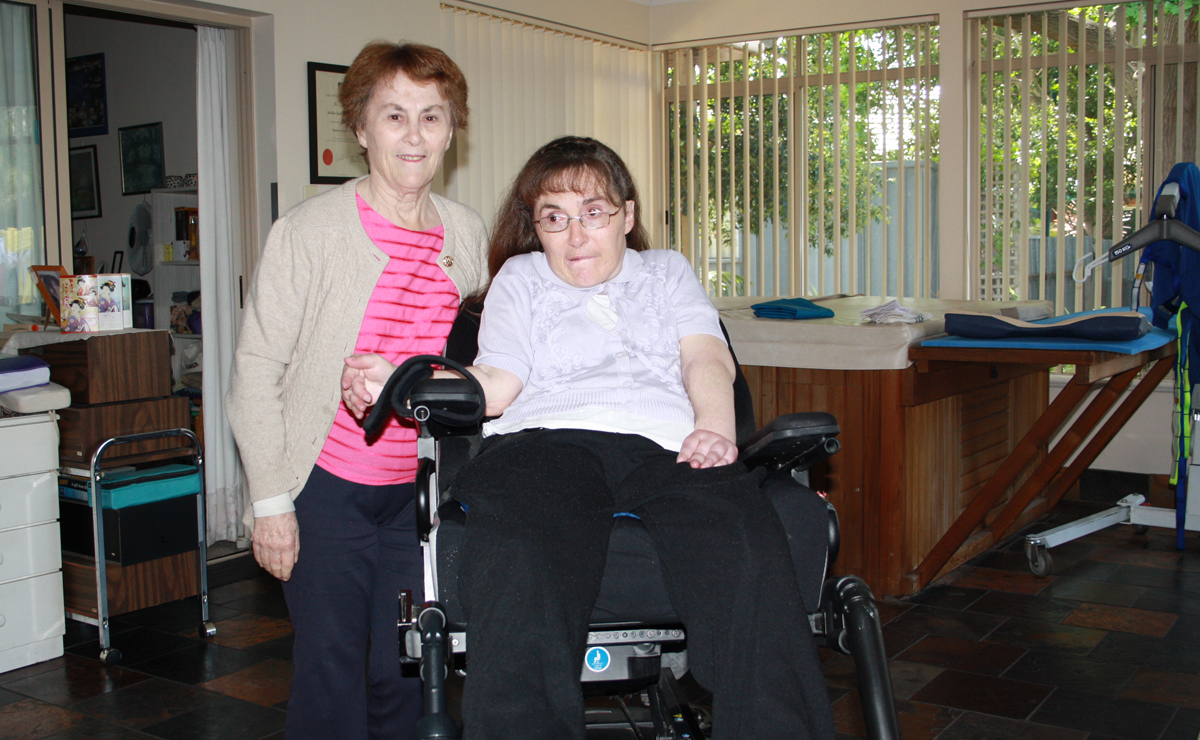 Airlie and her mother Pamela in their Lockleys home. Photo: Andrew Spence

Rees, the former head of Disability Research at Flinders University’s School of Medicine, has followed Airlie’s progress closely since her accident. He also helped develop opportunities and strategies for her rehabilitation in conjunction with Sydney expert Dr Ted Freeman.

“It is the most complex serious damage to the brain stem that I’ve ever come across,” he said.

“The brain is such a sensitive instrument. It’s the only part of the body that doesn’t heal itself – you have to work at it.

“She’s a very good example of someone with a serious brain stem injury who has managed to live on and achieve beyond what would have been expected. It is the most astonishing chapter in the coping of someone who for much of the time is locked in.”

Rees said unyielding support from Airlie’s family and carers, particularly her mother Pamela, had been crucial to her recovery.

“Airlie has responded and it is the love of a mother for her daughter that is almost Shakespearean.

“The desire to keep her alive and develop a life post-trauma has been astonishing.”

Airlie has had 10 operations since the accident and has endured ongoing bouts of ill health that currently require her to be fed through a tube into her stomach. 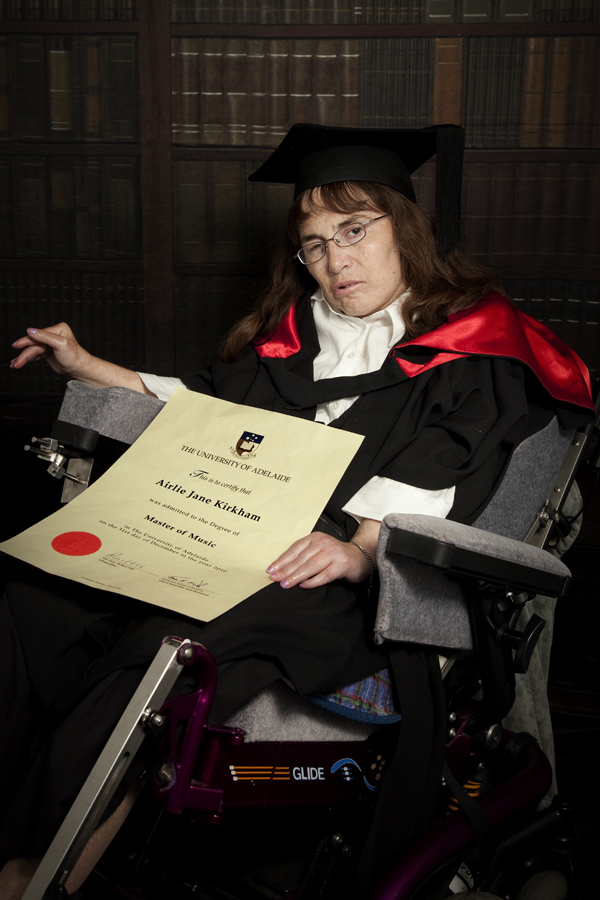 Airlie at her Master of Music graduation in 2010.

Disrupted by illness and her university studies, Airlie has spent about 15 years piecing the 81-page book together.

Pamela said Airlie wanted to share her story and tell others that hope was not lost, that there were ways through the tunnel to find the light.

“It’s become more or less a testament of her faith but she also wanted to help other people who were in the same predicament,” Pamela said.

“We’re very proud of her because it is an achievement we never would have dreamed she could achieve, although, knowing Airlie I wouldn’t have put it past her because she’s very determined.

Airlie is a member of poetry group, A Passion of Poets. Her next goal is a book featuring some of the hundreds of poems she has written since her accident.

“There is light at the end of the tunnel but one has to find the way there, I have found that light and it will lead me on into the future,” she writes in her book.

There is a Light at the End of the Tunnel is available for $20 from Dymocks Rundle Mall in Adelaide or online at ginninderrapress.com.au.