This morning, Area councillor Anne Moran sent the above image to her colleagues, and to InDaily, suggesting the council “take the plunge” and install a “cheap and easy” bikeway.

It was an apt metaphor for the condition of the Frome Street bikeway debate – which the council remains unable to flush.

The latest episode began last week, when a consultation on design options for replacing and extending Frome Street bikeway came back showing few business operators and residents wanted it replaced at all: most wanted no changes to the existing bikeway, or only minor changes.

Central Ward councillor Houssam Abiad responded to the crisis by suggesting Lord Mayor Martin Haese call a special meeting to decide the fate of Frome Street once and for all.

Abiad lodged what was billed as a “compromise” deal to be debated at the special meeting – where the northern half of Frome Street bikeway would be removed and replaced, and the southern half left “as per the existing configuration”. 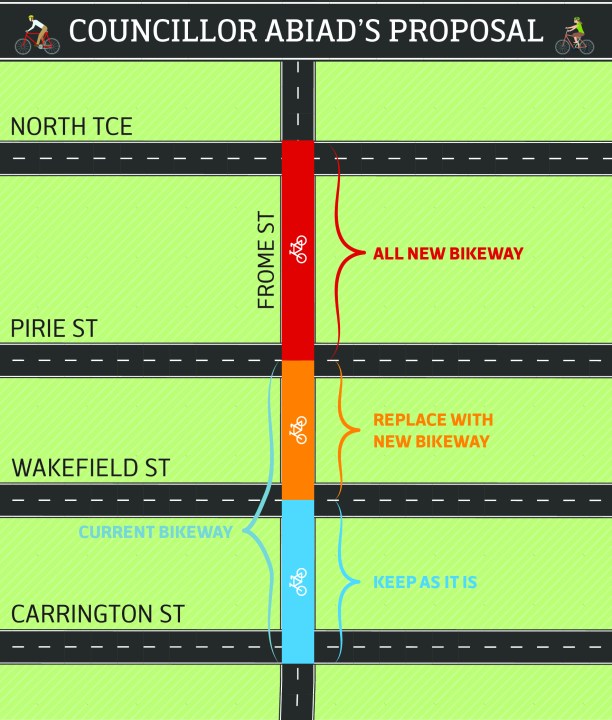 By the time councillors entered the chamber to debate the motion, a series of “variations” had been negotiated behind closed doors, including that:

At that meeting, South Ward councillor Priscilla Corbell expressed relief that “we’re no longer going to be ripping up all of Frome Street bikeway” because the two southernmost blocks of the street would remain basically as they are, and voted for it.

Area councillor Sandy Wilkinson also expressed relief – that the motion would “see us leaving the width of the bikeway, albeit without the concrete the kerb things”.

The “concrete kerb things” have been a lightning rod for both sides of the debate.

They are regularly referred to as “tank traps” and “dangerous” by councillors who want a complete replacement of the bikeway.

Rhetorically, whether or not those bits of concrete remain on the road has been framed as the difference between “ripping up” the bikeway and merely affecting “minor safety improvements”.

So it was curious, the morning after the vote, that Haese was unable to say whether it meant the southern section kerbs would stay or go.

“Whether that involves exactly the same concrete structures … we’ll leave that to their (council design staff) expertise,” he told InDaily.

He suggested that section might be modified to match “treatment one” – a design where the bikeway, a paved and planted “barrier” and the road are on the same level. 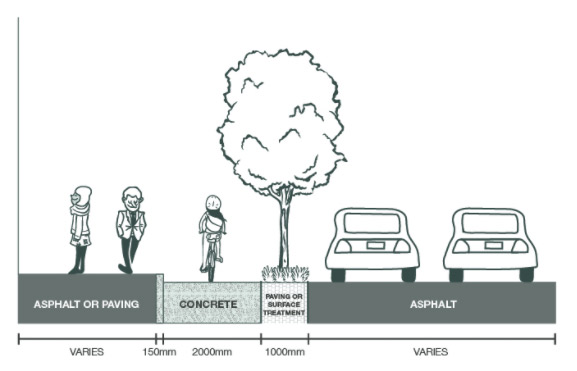 The “treatment one” or “flush” Frome Street design option.

So no concrete kerb things?

Matching his interpretation of what had been decided, here’s what the plan looked like: 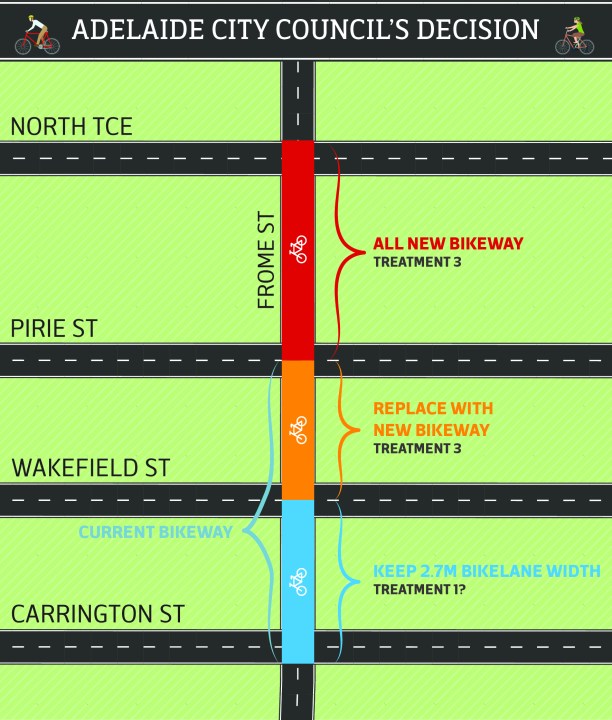 But several councillors say that is not what they voted for.

Corbell told InDaily she believed the decision locked in “only minor changes” to the southern section including only “minor safety … and aesthetics” changes.

“If it is anything different to that, then we’ve been misled,” she said.

Central Ward councillor David Slama, who seconded the motion, said his interpretation was that the southern section would not be “touched”, except for minor improvements.

Moran said she “assumed” the southern section “would be left as it was”.

“I assumed we were working on a no-cost, no-change [model for the southern section].”

North Ward councillor Phil Martin said he had been involved in negotiations on the varied motion with Haese, Abiad and Deputy Lord Mayor Megan Hender before the meeting, and that he was “never in any doubt” of the opposite – that the decision meant removing the kerbing and applying treatment one to the southern section.

He added it had always been Hender’s wish that there be a “consistent” design language along the length of Frome Street, which meant removing the kerbing.

Hender has not returned phone calls from InDaily.

The reason diametrically opposite interpretations of Tuesday’s decision are possible seems to be because of a semantic nuance in its wording.

It says the southern section would continue to feature “one lane of traffic in each direction at all times, with on-street parking at all times, as per the existing configuration”.

It mentions one lane of traffic, implying the width of the bikeway would remain the same, but makes no reference to the kerbs. Whether the practical meaning of “the existing configuration” extends beyond bike lane width and car parking is unclear.

Several lines down, the motion instructs council staff to develop a new bikeways guideline that “includes, but is not limited to … the use of design treatments one and three, with treatment three to be preferred for bike lanes narrower than 2.5 metres”.

Does that imply the southern section will eventually be made to fit the guidelines, i.e. receive “treatment one”?

No, Abiad told InDaily; or not necessarily.

He said his intention was “not to see any other changes there” beyond greening and minor safety improvements, but that the design guideline would return to council for discussion.

“That’s a decision for council,” he said.

InDaily asked the council’s administration how it would interpret the decision.

Council director of operations Beth Davidson-Park told us: “Administration’s immediate priority is to consult with adjacent ratepayers and progress to construction the new Pirie Street to North Terrace section of the bikeway.”

“We will work through any changes to the southernmost section of Frome Bikeway when that is considered at a later date,” she said in a statement.

“It is envisaged that any changes would only be for aesthetic and safety reasons.”

Asked whether that could include the replacement of what’s there with “treatment one” and whether the council’s administration ruled out that interpretation of the decision, a council spokesperson said no further comment would be provided.