After almost three years of rancorous debate over Adelaide’s most divisive piece of cycling infrastructure, councillors expressed hope that last night’s decision would end the controversy and the media would stop reporting on it.

The council last night revoked its July 2016 to demolish and replace the entire bikeway with a thinner one to accommodate two peak hour traffic lanes in each direction along the length of the road.

Instead, under a “compromise” proposal by Central Ward councillor Houssam Abiad only the northern half of the existing bikeway will be turned over to the more slender “treatment three” model.

The all-new separated bikeway will be laid from Pirie Street to North Terrace before any significant changes are made to the existing bikeway – a key condition of Deputy Lord Mayor Megan Hender’s support for the plan, negotiated before the meeting.

The decision also locks in the current 2.7 metre width of the southern half of the existing bikeway (between Carrington Street and Wakefield Street) with only a single traffic lane in each direction. 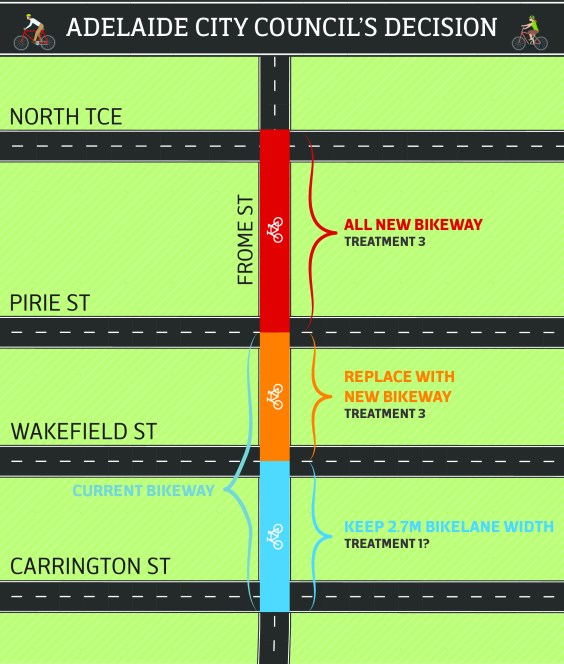 All of the existing bikeway will be renovated, and a thinner bikeway will extend to North Terrace (first) as a result of last night’s decision. This conceptual map shows the key dividing streets. Image: Leah Zahorujko/InDaily

However, the wording of the motion is open to conflicting interpretations about the southern section.

Lord Mayor Martin Haese told InDaily the council would eventually “green and beautify” this section of the bikeway, but that it was up to council staff to decide whether the cement kerbs separating cyclists from traffic would remain.

“It will certainly be greened and beautified,” said Haese.

“Whether that involves exactly the same concrete structures … we’ll leave that to their (council design staff) expertise.”

He added that “there’s got to be some sense of continuity” in design between the southern and northern halves of the existing bikeway.

Asked whether he believed last night’s motion suggested the southern section would lose the concrete kerbing in favour of a flush “treatment one” design, Haese said: “I think so”. 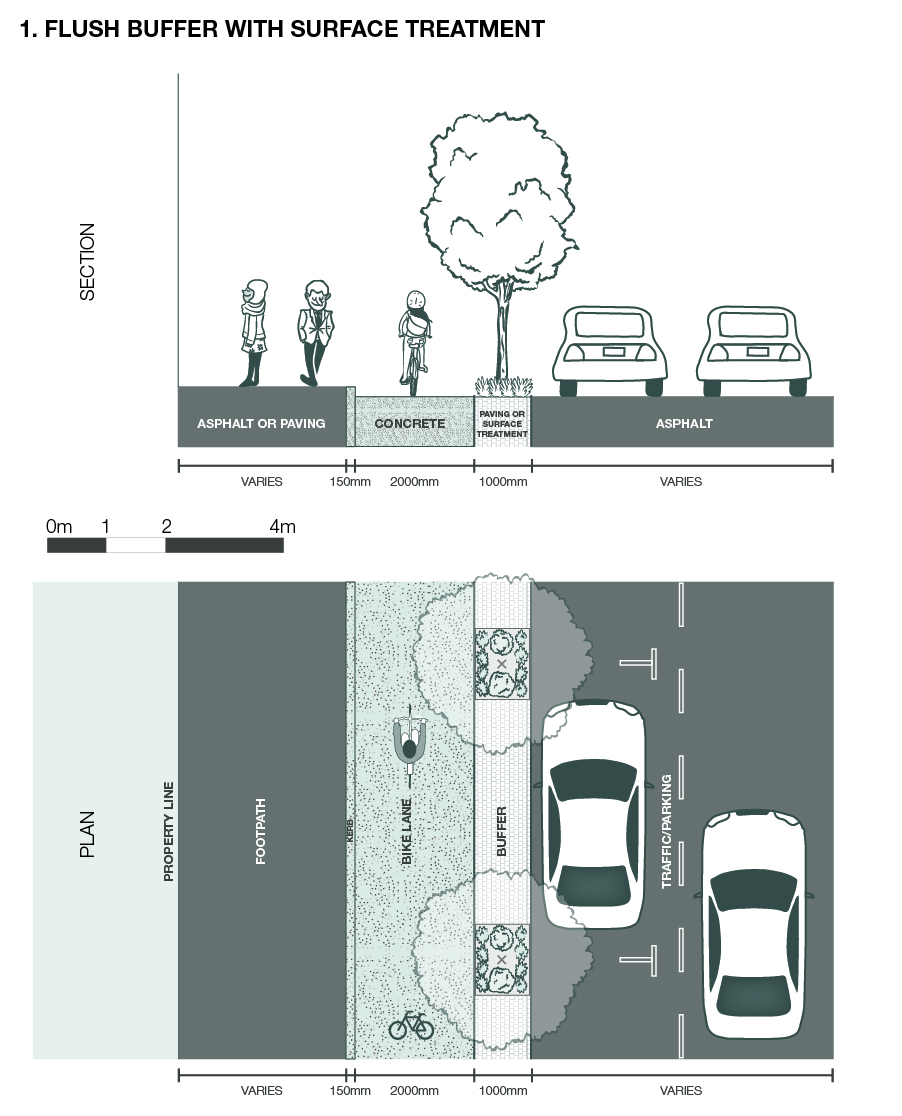 Haese suggested “treatment one” may be applied to the southern section, between Carrington Street and Wakefield Street. Image: ACC

He said last night’s decision was significantly different to the July 2016 decision because the width of the southern section of the bikeway would remain 2.7 metres wide.

Haese said last night’s decision was a “good outcome” which locked in quality and ensured that “this very divisive conversation stops”.

“I think it is a good outcome,” said Haese.

“It will set the design standard, which will be a quantifiable improvement on what we have now … [and] it will win much wider public support as a consequence.” 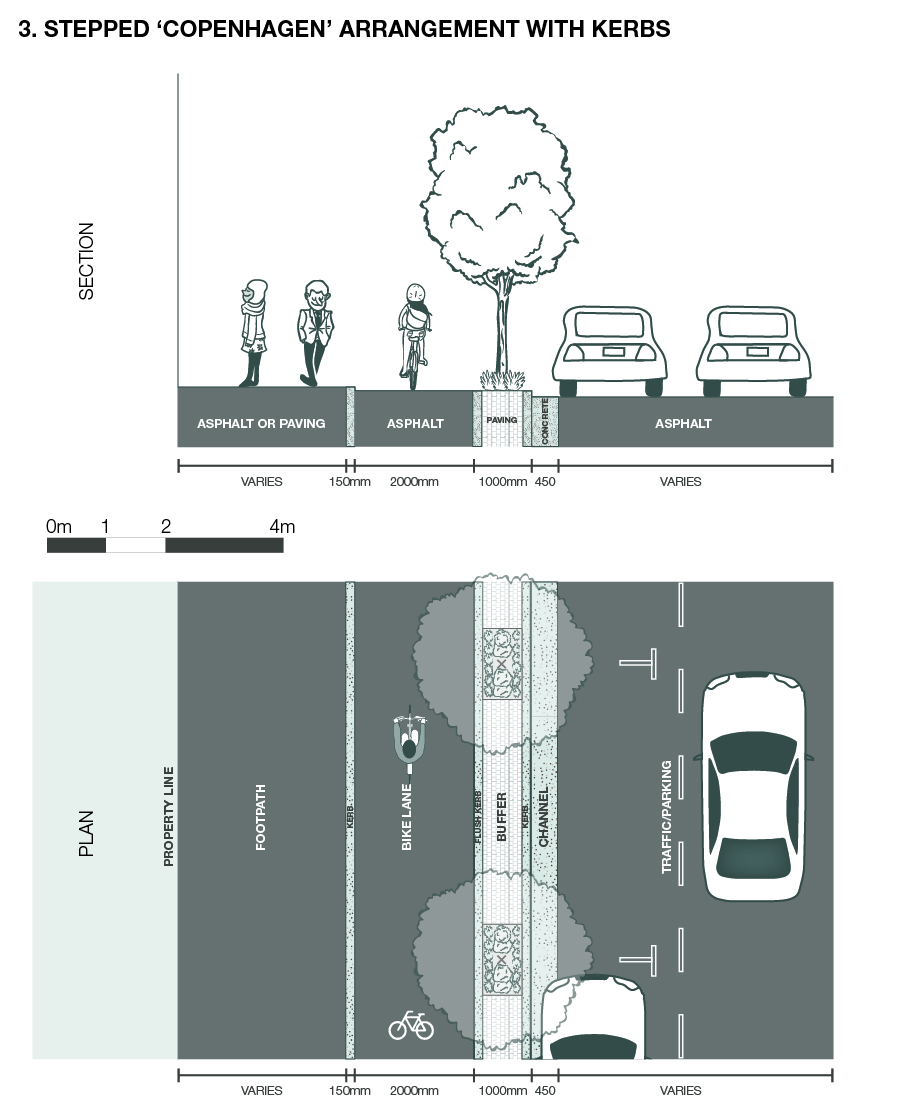 The “treatment three” design to be rolled out between Wakefield Street and North Terrace. Image: ACC

Haese said “I think the vast majority of the cycling community are going to love it” and that the final design was “good for more than one stakeholder group”.

The most common comment made by business operators who responded to the consultation was that they would prefer the retention of all-day car parking over two lanes of traffic along the length of Frome Street.

But Haese said many of the business operators he personally spoke to during the consultation were happy with two lanes of traffic for Frome Street because the parking lane would only become a clearway during peak hours.

The new design for the street will reduce the total number of car parks on Frome Street from 133 to 116 – 80 of those parks will be open during off-peak times and the 36 all-day car parks already there on the southern section will remain.

A 2015 independent evaluation report commissioned by the council noted that: “at no time before or after the construction of the bikeway was all on-street parking fully occupied in any of the four blocks, with parking occupancy well below 80% for most of the day at all locations”.

“[And] the parking occupancy surveys indicate that the supply of parking is sufficient across all sections of the bikeway along Frome Street”.

Haese added that Transport Minister Steven Mullighan was “extremely happy with the outcome” of last night’s meeting and “the partnership is strong; the project will be successful”.

Bike SA’s Christian Haag said that while his members did not believe it was necessary to significantly change any part of the existing bikeway, “we’re pleased that there’s finally agreement on the way forward”.

“It’s been a sad and sorry saga … [but] at this point we need to look forward,” he said.

“The council and the State Government now need to fast-track the development to the river [Torrens, beyond North Terrace] and the East-West corridor.”

He said he was disappointed the “conversation has gone on so long” and that the concerns of some councillors throughout the debate were not grounded in evidence.

He added that it was his hope that the council could design the new sections to allow cyclists to move onto the footpath where a bike lane of at least 2.5 metres could not be accommodated. This would allow them to overtake slower riders.

He said it made sense that the northernmost half of the existing bikeway be modified to allow two traffic lanes.

“It makes more sense to have more increased capacity,” he said.

“The section from Pirie Street to North Terrace was going to require two [traffic] lanes … to deal with traffic issues [anyway].”

He said he was looking forward to an announcement of the timing of the works to renovate the street, and said he hoped the works would be timed to produce “minimum disruption”.