As InDaily revealed yesterday, some councillors are mobilising to overturn the council’s July 2016 decision to remove the existing Frome Street bikeway and replace it with a thinner version in order to accommodate two lanes of traffic in each direction.

The push to overturn the decision – to be debated at a special council meeting next week – was prompted when official consultation found few local residents and business owners supported removing and replacing the current bikeway.

Councillors Anne Moran and Alex Antic told last night’s council meeting that if the council backtracks on its decision, it should also cancel the city bikeways co-funding deal with the State Government – the largest investment in cycling infrastructure in the history of the city of Adelaide.

“We’ve been entrusted with a co-funding arrangement with the State [Government] … which, my understanding is, was contingent upon the rectification of the street in its entirety,” Antic said.

“To the extent that that cannot be achieved then I think we have some serious questions as to whether or not this council continues to fund projects of this nature.

“I’d certainly have some reservations about the amount of money we accept from the State Government and whether or not that best be dutifully returned.”

A central factor driving last night’s debate was uncertainty, and competing claims, about whether replacing the existing separated bikeway was a condition of the co-funding agreement.

Moran told the chamber that even “if [the co-funding deal] is not officially contingent on us doing a good job here, I’d take it away.”

“If we [take] two and a half years to get to another workshop, don’t give us the $12 million – we’ll paint some lines on the road.

Area councillor Natasha Malani, who favours rolling out new bikeways before making changes to the existing infrastructure said: “That money from the State Government was not contingent on us doing anything.”

“If there is a [decision] to take that money back, then we’ll do it ourselves.”

Lord Mayor Martin Haese has, since early February, declined to clarify whether replacing the current infrastructure was a condition of the funding agreement. 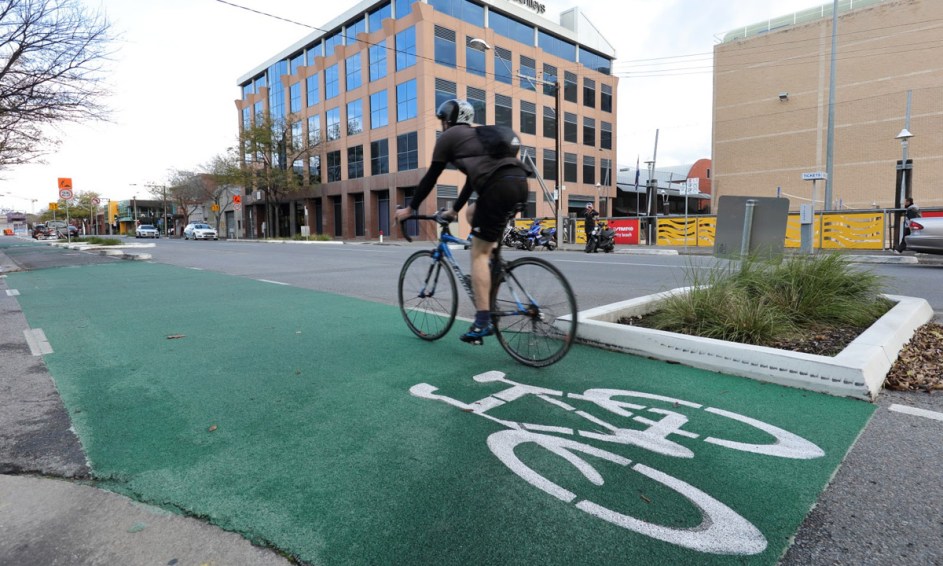 When asked to do so at last night’s meeting, he said that the Government wanted a higher quality “outcome”, but that Transport Minister Stephen Mullighan “is committed to segregated cycling infrastructure … at an altogether higher level of specification than what we implemented [four] years go”.

Haese told InDaily after the meeting that the Government would be “very disappointed” if the current separated bikeway remained as it is, and that “you would have to ask Minister Mullighan” if the funding agreement was at risk.

But he said there was no formal condition in the agreement between the council and Government to that effect.

Council director of operations Beth Davidson-Park confirmed to InDaily this morning that there was no clause in the written operational agreement between the two levels of government making the replacement of the existing bikeway a condition of funding.

Mullighan told InDaily in a statement this morning that while the council had “got the design of Frome Street bikeway wrong,” the Government was focused on new cycling infrastructure.

“In our view the former council got the design of Frome Street bikeway wrong and it’s up to the council to now find a way to fix it,” Mullighan said.

“The State Government’s focus is on completing the north-south corridor and establishing the east-west connection, and our funding is not to be used for the fix of the existing section of the Frome Street bikeway.

“The State Government has indicated it is willing to make a contribution towards completing the north-south bike corridor through the city, as well as to the establishment of an east-west bike corridor.”

Moran and Antic both questioned why council staff had allowed the consultation report to include feedback on replacing existing infrastructure when the July 2016 council decision to do just that was already “on the books”.

Antic described the consultation report as an “attack on what was already a very sound and reasonable decision of this chamber”.

“We have a decision on our books from July last year which very clearly states that the street was to be returned to two lanes of traffic on both sides of the street,” he said.

Moran, who moved the July 2016 motion, told the chamber: “I moved a motion and got a successful resolution some months ago, that we return it to four lanes during rush hour … that just seems to be ignored.”

“It was a unanimous vote of this council and yet we’ve come back with a consultation that I do not think in any way reflects the views [of ratepayers].”

The latter comment drew laughter from the gallery, which was dominated by advocates for maintaining the current bikeway.

Moran said the consultation had reflected the views of the gallery, not ratepayers.

But the council’s associate director of design and strategy, Daniel Bennett, told the meeting the consultation had not asked people whether they wanted the existing bikeway to be replaced: respondents had offered their opinion unsolicited.

The consultation involved interviews with 70 business operators, 68 residents and 27 design experts. Hundreds attended a series of consultation events, 82 people commented online and 1600 leaflets were mailed out to local residents.

Central Ward councillor Houssam Abiad said ratepayers represented “just under half” of those who had provided a response to the consultation.

He added that the council should not ignore the opinion of the 14 per cent of business operators and residents who indicated they wanted the bikeway replaced.