About 180 employees and contractors will lose their jobs, mostly at the company’s Port Road bottling plant.

The closure is the latest sign of change on the top of Port Road, with a number of industrial users opting to leave their traditional location since the State Government rezoned the area to encourage residential development.

Coca-Cola Amatil group managing director Alison Watkins said the decision had come after a review of the company’s Australian supply chain network, which recommended increased production in Queensland and Western Australia, and the closure of SA manufacturing.

“The review found that further development of our facility at Thebarton in South Australia was constrained by its CBD location, site layout, dated infrastructure and expensive logistics,” Watkins said.

“This isn’t a decision we have taken lightly, but we know it will be important for ensuring our position in the market in the future.”

The company will invest $90 million in its facilities in Queensland, with other manufacturing activities shifted to Western Australia, Victoria and NSW.

“I want to take the opportunity to acknowledge our committed and hardworking manufacturing team in South Australia,” Watkins said.

“I know today’s announcement will be difficult for the team, many of whom have been part of Coca-Cola Amatil for many years. They are our priority as we work through this transition.”

She promised the company would work with each affected employee to provide financial counselling, personal support and assistance in finding new jobs. “Where feasible”, some permanent staff would be redeployed within the company. 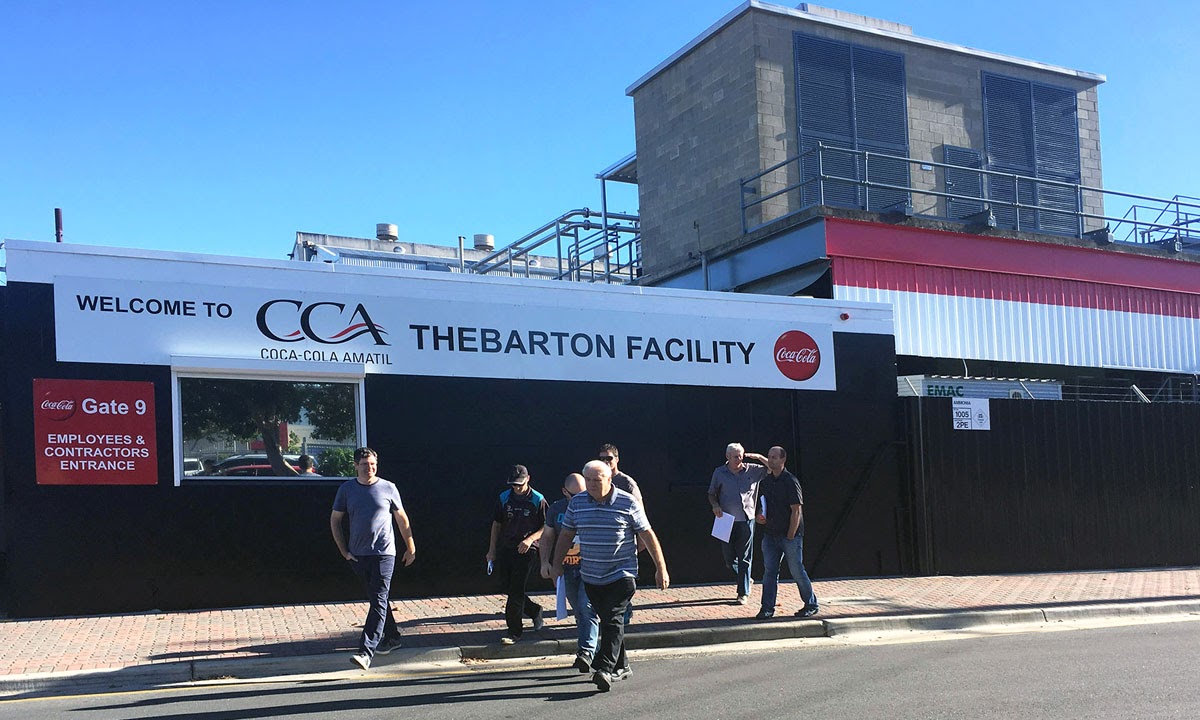 Workers outside the Coca Cola Amatil plant at Thebarton this morning.

Watkins said the closure of the South Australian facilities would save $20 million in costs from 2020.

Coca-Cola has been bottling its products at the Thebarton plant for 64 years, with the Port Road factory becoming a favourite site for school tours.

The top of Port Road has become an attractive site for new development after the State Government rezoned the section of the key corridor facing the parklands in 2013 to encourage housing development to take off in the long-standing industrial area.

Later in the year the University of Adelaide sold its Thebarton campus, located partly in the former Faulding pharmaceutical factory, to a group of Adelaide developers led by Pep Rocca.

Former South Australian Integrated Design Commissioner Tim Horton said the departure of Coke from the site had been a “given in planning terms” for the past five years.

Interesting for this to be viewed as a bombshell, @mikesmithson7. Coke’s departure has be a given in planning terms for 5 years+… https://t.co/hhamEnolhd

A Coca-Cola Amatil spokesperson told InDaily the board had made the decision to close the Adelaide plant yesterday, and that it wasn’t yet in discussions with developers.

She said the decision was based primarily on the size constraints of the site. While the value of the land was part of the decision, it wasn’t a “determining factor”.

“As you would expect, regardless of where a site is, land value is put into the mix,” she said.

The executive director of the Property Council, Daniel Gannon, said the Coca-Cola closure was a sign of the changing face of inner Adelaide.

“This isn’t a manufacturing decline story; this is a story about the urbane fabric of Adelaide changing,” Gannon told InDaily.

“While this is a difficult day for many South Australian families connected to the Coca-Cola business, it does seem likely that this site will be developed by a property developer, and that will create jobs for many more South Australians.”

He said the site was in a prime position, with excellent transport connections including light rail.

“It’s on the outskirts of the city. In any international city around the world, a location of that proximity to the CBD is worth an enormous amount of money. I don’t think this site is any different.”

The facade of the nearby ES Wigg & Son premises on Port Road – sold to developers last year.

InDaily asked Manufacturing Minister Kyam Maher about the potential impact of the rezoning on Coca-Cola’s decision-making.

He responded by echoing the company’s statement: “Coca Cola Amatil have advised their decision to close their manufacturing facility in Thebarton in 2019 was reached following a national review of their operations, based on an assessment that the site was constrained by its CBD location, site layout, dated infrastructure and expensive logistics.”

The workers at the site were told the news this morning.

Gino Gaddy, who has worked at the Thebarton plant for 15 years said he was unsure what he would do next.

“The main mood is just shock,” he told reporters.

SA Premier Jay Weatherill said he was “disappointed” that Coca Cola Amatil did not consult the State Government before the decision.

“Although we do note their observations that no amount of support would have changed their decision,” he said.

The premier said the company was also firm that electricity prices played no part.

He urged the media to focus on good news, not just the bad news.

“Frankly, if you keep giving prominence to the closure of Coca-Cola and not equal prominence to the opening of a plant with a similar number of jobs on the same day, of course people are going to have the perception that there is a negative situation in South Australia,” he said.

“We have had 17 months of continuous jobs growth – that means for every job that’s lost, we’ve replaced it, and we’ve grown additional jobs.”

“Very sad day for workers at Coca-Cola factories in SA. Australia must stand up for manufacturing jobs,” he posted on Twitter.