In late 2015, SA Health rolled out a campaign dubbed “1 BY 9” (One By Nine) at Flinders Medical Centre, Noarlunga Hospital and the Repatriation General Hospital, urging clinicians to find at least one patient each day, in each ward, who could be discharged before nine AM.

SA Health says the campaign has now been wound down, but staff are still “encouraged” to find a patient to discharge before 9 o’clock each morning.

“Early discharge can have disastrous consequences – even death,” said Pope.

“Doctors are bound by medical ethics … to always put duty of care as the number one priority.

“It can be quite infuriating [and] insulting for management to interfere in the medical care of patients.”

State Coroner Mark Johns has held several inquests over the past five years into the deaths of patients who were discharged from South Australian hospitals shortly before committing suicide.

Another inquest, in 2016, reportedly heard nine-year-old Leila Baartse-Harkin was admitted to the Women’s and Children’s Hospital, then discharged within hours, and died two days later from injuries that went undiagnosed in hospital.

Pope, a senior emergency department doctor at the Lyell McEwen Hospital, said doctors did not need to be told to discharge patients as soon as they are ready, and that campaigns such as 1 BY 9 threatened to compromise doctors’ independence.

“Doctors are bound by medical ethics … to always put duty of care as the number one priority,” he said.

“Doctors will and need to maintain that dedication.”

He said messages from management applying pressure to send patients home early shouldn’t compromise clinicians’ commitment to only discharge when it is medically safe to do so, “but it can [compromise doctors] and it does, and that can have dire consequences for patients and patients’ families”.

Pope said the campaign was only acting as a “guideline” at Flinders, and not strictly enforced, but “it could potentially do harm to patients if it’s applied quite vigorously”.

“The purpose was to encourage people to recognise the [medical] advantages of early discharge,” he said.

“It was meant to get people thinking along the lines of our need to get things moving.

“If we can get the patient home before 9… we can get [another] patient from the emergency department [into a hospital bed].”

“You weren’t chastised if you didn’t do it – if you didn’t send someone home, no one came around and told you off,” said Aylward, adding that clinical staff were part of the decision to implement the campaign. 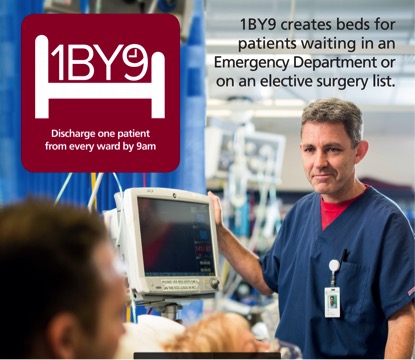 An image from SA Health promotional material for the 1 By 9 campaign.

He said similar campaigns were run in hospitals around Australia and that clinical teams always and only made decisions they believed to be in the best interests of their patients.

“Obviously, [discharge] is a clinical decision by the [medical] team,” said Aylward.

“We certainly don’t send people home earlier [than is safe].”

He said that the campaign encouraged staff, especially junior staff, to complete the paperwork for discharge the day before a patient was to be sent home – so that the patient leave early the following morning, rather than in the afternoon.

“We still encourage people to get patients out before nine [AM],” he said.

Aylward said that all hospitals make mistakes and send some patients home too early.

“Obviously there are occasionally [patients who] get sent home too early.”

“Everyone here wants to work in the patients’ best interests.”

A spokesperson from SA Health told InDaily 1 BY 9 was based on sound international clinical evidence and that it was designed to keep patients and carers informed about discharge plans.

“We understand patients would rater be recovering in the comfort of their own home rather than in hospital, where there is a higher chance of infection and deterioration,” the spokesperson said in a statement.

“The initiative was well-received and supported by clinicians as a way of providing better communication to patients and families about their discharge plans.”

Australian Nursing and Midwifery Federation SA director of operations and strategy Rob Bonner told InDaily the nurses’ union was “broadly supportive of measures that encourage clinicians … to consider who is ready for discharge”.

However, he said: “We would be deeply concerned if those arrangements turned into taking people out of hospital [prematurely].”

“The tension is making sure people are ready [when they are] discharged.”