Car-parking stations, scattered across the CBD, are the council’s most important source of revenue behind rates.

Haese says those stations may become unsustainable – and need to be converted into something more economically viable – as consumers ditch traditional cars for automated vehicles over the next decade.

“The good thing about them [the car parking towers] is they’re all prime real estate – they are very good real estate holdings,” Haese told InDaily.

“The council’s revenue base … is about 55 per cent reliant on rates.

“I think we need to be very, very mindful – very strategic – about laying down our sustainable sources of revenue so that we can hold rates at 55 per cent or less.”

Haese said it was a “ballsy” Adelaide City Council that bought up a series of properties for car parking in the 1970s, but: “Can we rely on that indefinitely? Maybe not.”

“We have to deliver an absolute myriad of services … I think we need to be looking at – what is our next generation of sustainable revenues?

“We’ve got to be looking, and I think our property portfolio is one of the answers.”

He said any future redevelopment or repurposing of the council’s city car parks would need to be decided “on a case-by-case basis”.

He added that “we could look at … the highest and best use of our real estate assets” beyond the council’s car parks. 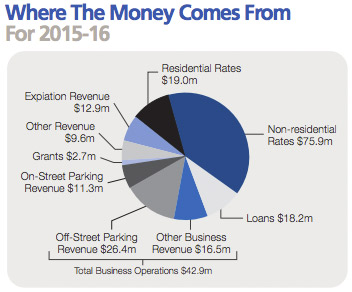 During his 2014 election campaign, Haese claimed that “the Adelaide City Council is addicted to the revenue generated by its car parking stations, on-street car parks and associated fines”.

Haese is not alone in predicting big changes for car parking in Adelaide’s CBD.

The plans, which include more than 1000 apartments, contain a striking and deliberate omission – no car parks.

“You’ll buy a million dollar apartment without a car park, because you won’t have a car,” he said.

“People will choose to drive a car like they choose to ride a horse today.”

He added that: “Singapore has already got a precinct where they’ve got driverless taxis.

“[If, in the future] you want to go visit the grandkids in the suburbs, you just take a driverless Uber, for $2 there and $2 back.

In November, InDaily reported that Commercial&General’s pitch for the site – which wasn’t released to the public – showed driverless shuttle stops planned for the new development.

A 2015 white paper on the future of car parking in Australia, by commercial real estate agents Colliers International, says: “Demand (for car parking) is exceeding supply – local governments are curtailing growth in car parking spaces in CBDs and no new multi-storey car parks are being developed”.

Haese likely to run for re-election

However it also says Adelaide has the nation’s highest ratio of car parks to city workers, and that that ratio increased slightly between 2013 and 2015.

Moreover: “Shopping centres will no longer require parking at all.”

“Instead, they will require just enough spaces to drop off and collect those shoppers entering and leaving the stores.

“As you pass through the checkout, the register could identify you via your smartphone and call a car from the car pool to pick you up.

“We could see a return of the high street shopping strip.”

The Adelaide City Council has engaged a consultant to review rates and revenue streams. A report on “evidence-based opportunities to reset Council’s total revenue base” is due next month.