The Mission Australia Youth Survey, released today, has found a strikingly high level of experience with discrimination among 15-19 year-old Australians with nearly 30 per cent identifying equity and discrimination as the most important issue facing the country.

The South Australian figures show that nearly half of young women had experienced unfair treatment or discrimination due to their gender in the past 12 months, while more than 26 per cent of respondents had experienced the same due to their race or cultural background.

While these figures are broadly in line with the national statistics, where young South Australians depart from the national averages is in relation to economic opportunity.

In South Australia, the top two concerns were the same, but “population issues” came in at number three, possibly reflecting a concern about the drift of young people away from the state.

Young South Australians were also considerably more concerned about employment than their interstate counterparts, and also more worried about the economy and financial matters.

Nationally, 9.9 per cent of respondents believed employment was the top concern facing the nation – in South Australia, 17.7 per cent were most concerned about jobs.

The survey also found young South Australians were less positive about the future.

Just over 64 per cent of young Australians were either positive or very positive about the future; the comparative figure in South Australia was 61 per cent. Just over 11 per cent of young South Australians were either negative or very negative about the future (both higher than the national average), while 27.7 per cent were neutral. Young men were slightly more negative than women, but were also more likely to feel very positive.

The top issues of personal concern identified by young South Australians were coping with stress (47.8 per cent), school or study problems (37.4 per cent), body image (30 per cent), depression (27 per cent) and family conflict (24.3 per cent). 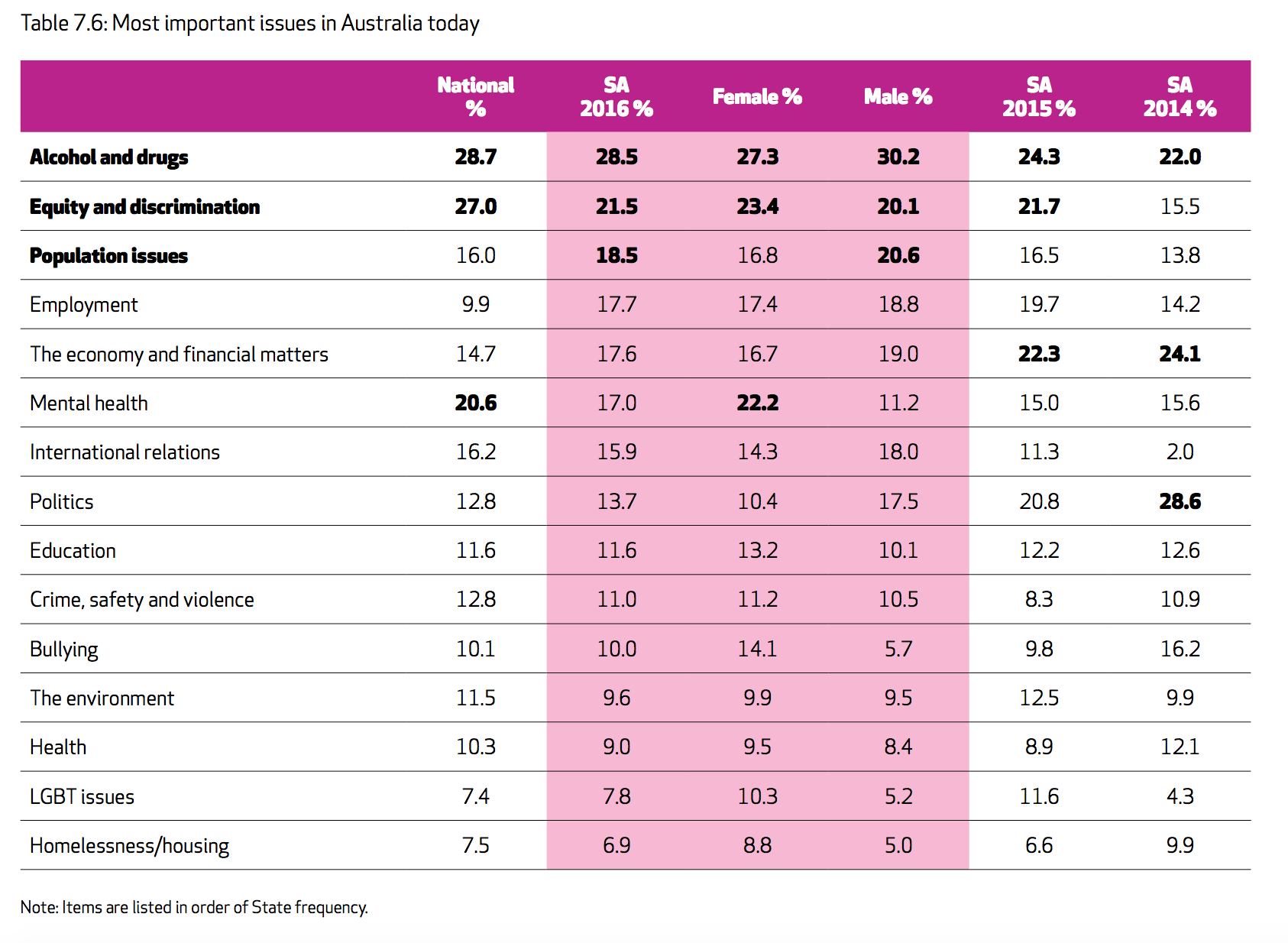 Mission Australia CEO Catherine Yeomans said it wasn’t too extreme to suggest the survey indicated a “crisis of hope” among some young South Australians.

“I think our young people do aspire to a bright future,” she told InDaily. “They have their whole future ahead of them and their aspirations are just like generations before them… (buying a home, getting a job, having a family).

“We need to make sure our young people have hope – that they can see their future. What young people tell us is that they see barriers to this future.”

Young people were feeling stress about their capacity to meet their aspirations, which ramped up the pressure on their educational performance.

“I think there are external pressures increasing on young people… (there’s) more and more pressure on the results they might obtain in an educational setting.”

Yeomans said other data indicated that unemployment was a huge problem for young people – in the double-digits in many areas.

“I was in Whyalla a few weeks ago and it’s really tough for young people there,” she said.

“Parents are struggling to keep young people connected with their education.”

Young people were questioning the point of continuing their education, when there was little chance of employment.

She questioned whether there was enough support for young people to move from schooling to employment.

“Are we doing enough with flexible learning options, with traineeships, helping young people transition into the workforce?”