On some old netball courts in the south-west corner of the parklands, the council has built replicas of several options for completing the north-south cycleway – of which the controversial Frome Street bike lanes are a part – and a new east-west bike route through the city.

It paid $50,000 out of its bike infrastructure budget to build three of the seven design options, including the “Danish-style” raised bike path favoured by cyclists and some members of council.

The test bike lanes have been built next to a replica section of two-lane road, with markings in the style that are likely to be used in the remodelled Frome Street treatment – a remake which could cost up to $2 million based on costings given to a council committee meeting last night.

Elected members have already visited the parklands test bed to eye off the options, dragging wheelie bins over different types of kerbing, and seeing the effect of the different kerb heights and surface treatments on cyclists and pedestrians.

The public, including city businesspeople, residents and cyclists, will also have the chance to visit the test site and see the design options first-hand.

It’s a big step up from the usual consultation tools of fly-through videos and static illustrations, and one the council says it will use again if the project warrants it. 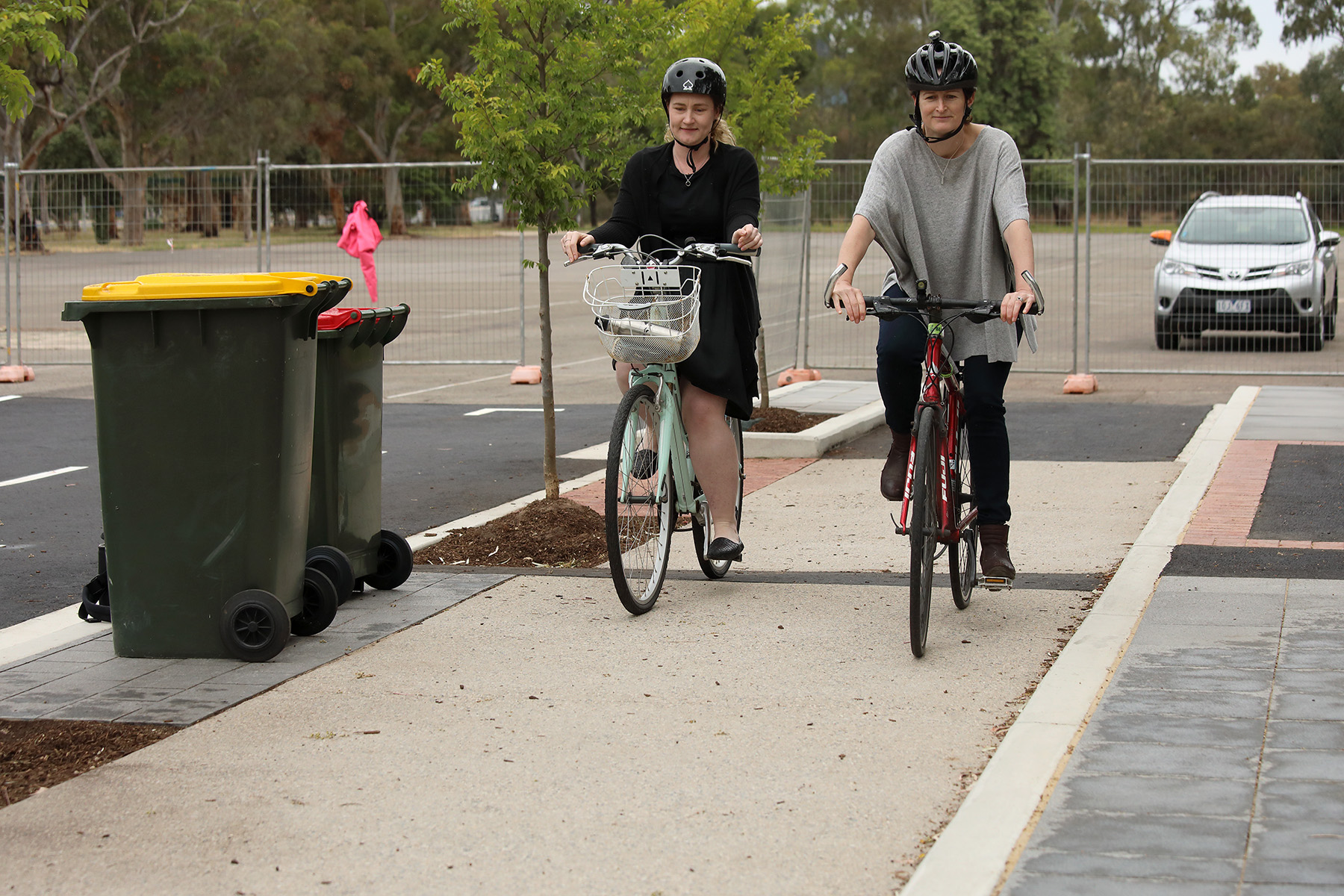 A closer view of the bike lanes the Adelaide City Council has built in Park 23.

The three options built on the test strip cover some of the key features of the different treatments put to the council last night in a paper about how to complete the north-south and east-west cycleways, and what could replace the unwanted section of Frome Street cycleway – from Carrington to Pirie streets – which was opened in May 2014 at a cost of $1.6 million.

In the above image, the treatment farthest from view represents one of the cheapest options – and is similar to that proposed by council admin to replace the current Frome Street bikeway. That treatment is opposed by cyclists, as reported by InDaily on Monday.

All the treatments would reduce the Frome Street bikeway from 2.7m to 2m. Cyclists say this reduced width, coupled with the regular height of the kerbing, means it will be effectively impossible to overtake, given the risk of pedals striking the kerb on either side.

The middle section pictured above is similar to the first, with two differences: the surface is concrete, removing the seam between the different gutter and lane surface treatments, and the buffer adjacent to the road does not have raised kerbing.

The option in the foreground is among the most expensive put forward, due to its impact on stormwater. It is similar to the Danish-style bike lanes, with no kerbing on the road side of the bike lane, and lower-profile kerbing next to the footpath, thus allowing cyclists to utilise more of the lane’s width.

The council administration has offered up the treatments not for the council to pick just one, but with the option of using a combination of them all, depending on the road and the nearby use.

For example, past a school or heavily used business, it would be favourable to use an option that had fewer trip risks. In the heart of the CBD, the more attractive Danish-style lanes might be considered worth the expense.

The stakes are high for the council after its second thoughts about Frome Street and a similar turnaround in Sturt Street. The Sturt Street “Copenhagen-style” separated lane was built at a cost of $400,000 before the council decided to remove it in 2010, due to complaints about lack of parking and blocked access to businesses.

For its new attempt at building cycling infrastructure, the council garnered a budget of $11 million, thanks to the State Government agreeing to match funding.

The budget will be used to replace the current Frome Street bikeway and complete the rest of the north-south cycling route, with separated bike lanes from Pirie Street – where the current cycleway ends – down to to Victoria Drive. A shared path would be built from Victoria Drive through North Adelaide.

The project will also build an east-west cycleway running down either Pirie-Waymouth, Flinders-Franklin or Wakefield-Grote, with separated lanes of various types from East to West Terrace.

The council considered the bike lane options in a committee meeting last night, and decided to add for consideration so-called treatment one – the middle section pictured above – to the cheaper option for replacing the Frome Street bikeway.

Lord Mayor Martin Haese said this option would avoid the costs of moving kerbing and stormwater, but would also remove the risk of pedal-strike, given there isn’t a raised kerb on the buffer.

He also raised the possibility of reshaping the kerb angle to further avoid pedal-strike.

He said the expense of building the test site in the parklands was worth it, because the council had to get Frome Street right as a demonstration of what could be done across the city.

The buffers, he argues, offer the opportunity to not only improve cycling infrastructure, but to beautify the city’s streetscapes.

“The existing part of Frome will set the standard for what we’re going to roll out, so we have to get that absolutely right,” he told InDaily.

“It’s going to cost a few dollars but we’re going to build this one to last. That’s why investment in the demonstration project was worth it.

“It would be a huge leap forward – we have a massive vested interest in getting it right.”

While there was some debate in the committee last night – about cycle lane widths, for example – Haese is confident the proposal will be passed by the council next week before going out to consultation. When that happens, the test track in the park lands will be open to the public for viewing.

Councillor Phillip Martin was one of the dissenting voices.

He believes the 2m cycle lane width is too narrow, particularly for families using trailers to carry their children, or for disabled riders on recumbent bikes.

He says Haese’s favoured option one would cost up to $35 million if it was applied to the entire 7km cycleway project.

On the other hand, Martin says the other option for Frome Street – the cheaper treatment six – isn’t a step up from the current “concrete mess” that exists on Frome Street.

“The cost issue is a significant one,” Martin said. “I just urge this Lord Mayor to be very careful.”

The council was projected to end this financial year with a $40 million debt, with a number of expensive and significant projects to come.

You can find all of the treatment options here.Save