After an overnight sitting, the latest bill was defeated in parliament’s lower house this morning on the casting vote of speaker Michael Atkinson after MPs were deadlocked at 23-23.

It had earlier passed a second reading vote, the first time such legislation had got so far in the South Australian parliament.

Atkinson, who unsuccessfully attempted to defer debate after the second reading vote, told 891 ABC radio that the bill might have passed if Premier Jay Weatherill and Opposition Leader Steven Marshall had not insisted on the vote going ahead overnight.

He said it wasn’t good legislative practice to have the detail of the bill considered by a “group of sleepless and irritable MPs for hours and hours until 4 am”.

However, Atkinson said he had been opposed to “physician-assisted suicide” for more than 20 years.

Go Gentle Australia, the organisation that had championed the latest attempt to approve assisted dying, thanked all those who had supported its cause.

“For the bill to have even reached that stage was an historic moment, for which we should all be proud,” it said.

In his speech during the second reading last night, McFetridge said the person most likely to make use of the provisions would be about 70 years of age and suffering from cancer.

“There will be no further treatment and they will usually only have days or weeks to live,” he told parliament.

“We can be sure their situation is dire because any health professional will tell you, people will do anything to live.” 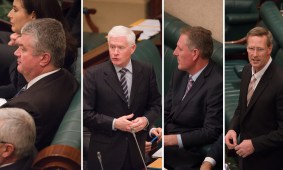 Why did these MPs change their vote on voluntary euthanasia?

One of the strongest opponents to the legislation, Labor backbencher Tom Kenyon, who said his stand was influenced by his religious beliefs, said the concept of euthanasia was fundamentally flawed.

Kenyon said he was also concerned about the potential breakdown of any safeguards put in place.

The original bill required someone to have a terminal illness and to be suffering unbearable pain that could not be relieved through other measures before they could access assistance in ending their life.

They also needed to have their decision endorsed by at least two doctors.

A number of amendments were passed to tighten access to the provisions, including making a mental health assessment mandatory, but ultimately failed to sway enough MPs.

How did your MP vote?