In the past two months Fringe Festival venue Tuxedo Cat was left homeless and desperately searching for a new location after a “takeover” by Feast Festival; comedy and arts venue Rhino Room confirmed it would be evicted to accommodate the construction of a 36-storey hotel complex; and developer Karidis Corporation confirmed it had purchased the Crown and Anchor hotel.

But it’s not all bad news.

Tuxedo Cat and Rhino Room are both hopeful of finding a new venue and management at the Crown and Anchor say the hotel is operating “business as usual” (Karidis remains silent on its plans for the future of the hotel).

Australian Hotels Association SA CEO Ian Horne told InDaily this morning, “some of the most difficult trading conditions for well over a decade” had forced Adelaide hotels to find innovative ways to attract new and regular customers – and musicians were the main beneficiaries.

“There’s been a momentum building over the past three or four years – there seems to be a re-energisation [of the live music scene].”

Horne said changes to liquor licensing regulations enacted last year meant venues no longer had to apply to the State Government for permission to host live music between 11am and midnight.

Several hotel operators had visited Melbourne and Sydney to discover what was working for venues in those cities, he said, and that had been “a major contributor to an increasing the offering of live music”.

Live music commentator and Proof Of Life festival organiser Joe Hay agrees: “The health of South Australian music is the best it’s been in a really long time.”

“The quality and quantity of bands coming out of Adelaide… at the moment is really quite staggering.

“It’s only going to get stronger.”

He told InDaily the Crown and Anchor, in particular, remained an essential element of the city’s live music scene – and the place where he first began to watch live music – but that even if developers turn the much-loved pub into something different, or moved to demolish it, there would still be plenty of venues where artists playing original music could connect with their audiences.

“If you are an artist in Adelaide there’s not a shortage of places you can play, that’s for sure,” he said, adding that venues such as the Jade Monkey, the Wheatsheaf Hotel, the Ed Castle, the Exeter – and, for now, the Crown and Anchor – were continuing to support local artists.

He said innovative music evens such as Sofar Sounds, where acoustic artists perform in volunteers’ lounge rooms, the Umbrella Music Festival, bringing performers together with audiences for live music in the normally slow winter months, and the Semaphore Music Festival, which attracted music lovers despite inclement weather last month, were all helping to support a flourishing live music scene for Adelaide.

“I’d be devastated if the Crown and Anchor closed – it’s such an important part of the scene.

“But whatever happens [Adelaide’s live music scene] will weather it.

“It’s only going to get stronger.”

Music SA General Manager Lisa Bishop said she hoped the removal of an approvals process for live music would see the Adelaide scene continue to flourish.

“There are a lot of people working across government and industry to try and bring these changes about.”

A message posted to the Crown and Anchor’s Facebook page yesterday assured customers: “We will be here for some time to come”.

“It’s business as usual here and we have some KILLER international and national acts as well as all the local favourites booked in.

“We literally have live bands six nights a week!

“So let’s do this. Buy a Beer, watch some killer live music and enjoy yourselves!” 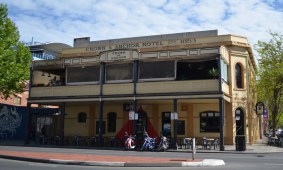 A Government spokesperson said “strong progress” had been made collaborating with industry and development regulators to remove red tape from the industry.

“As a recently recognised UNESCO ‘City of Music,’ we’re committed to creating an even better environment for our musicians to work and making it easier for our venues to showcase live music,” the spokesperson said.