The latest GfK ratings show ratings leader Mix102.3 had another good survey, with gains across the schedule.

The move of listeners to these FM music stations came at the expense of Adelaide’s two talk stations – ABC 891 and FIVEaa – who both lost listener share.

In the crucial breakfast shift, the ABC’s Matt Abraham and David Bevan maintained their lead over Mix’s Jodie Oddy and Mark Soderstrom, but it was shaved back to just 0.3%.

FIVEaa’s breakfast team of David Penberthy and Will Goodings lost some share but remains in third place. Nova and Triple M, however, are breathing down their neck. 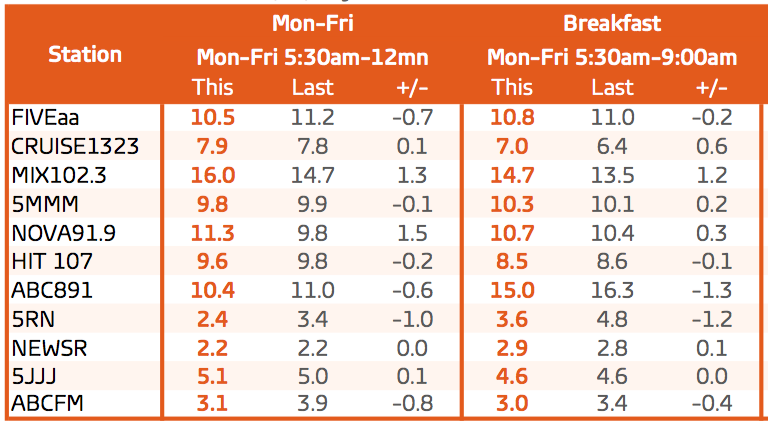 In Drive, Nova surged to the lead, knocking off previous leader Mix.

In the Evenings, ABC veteran Peter Goers wrested back the talk lead from FIVEaa – and was the only ABC presenter to record an increase in audience share – but remains behind Mix.

Overall, Mix is the clear leader, with 15.8% of audience share, followed by a resurgent Nova. FIVEaa is clinging to third, 0.1 percentage points ahead of ABC 891. Next on the list are a flatlining Triple M and hit107. 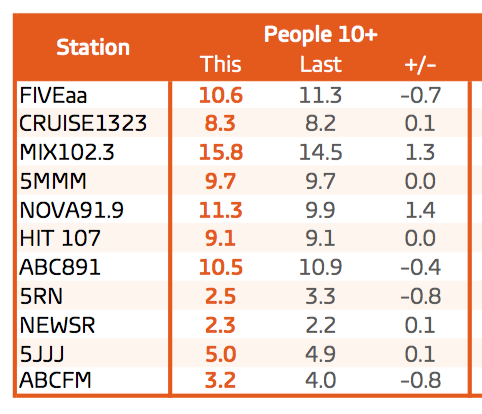