The mammoth bill finally passed the Upper House last month, although Rau is still considering recommiting elements of it in the Lower House in a bid to fulfill his wish to ban elected councilors from Development Assessment Panels.

However, he was successful in achieving an amiable compromise over his push to formalise an Urban Growth Boundary and introduce an Infrastructure Levy regime.

But in his report in the March edition of the HIA’s industry magazine Building News, SA executive director Brenton Gardner outlined his organisation’s efforts to cruel those two key elements of the bill, detailing a lengthy publicity campaign “and meetings with all key parties and independents”.

He also lamented that their efforts had been “made much harder” by the input of the Urban Development Institute of Australia and Property Council, both of which negotiated a compromise on the Infrastructure Levy.

This statement appears to have ignited an industry brawl, with Property Council state executive director Daniel Gannon telling InDaily: “It’s disappointing to see the HIA take an obstructionist approach and target other arms of industry when the stakes are so high.”

“As their members are aware, planning reform is a serious driver for economic growth… that’s why the Property Council took a leading role in driving a joint statement from industry on the Bill to ensure we were constructive participants in the process, rather than hurling stones from the sidelines.”

The bill formalised a levy scheme that will include an “opt-in model” to co-fund infill infrastructure projects, which would require 100 per cent agreement of affected property owners.

But the Property Council’s response pales to that of Rau, who said: “Of all of the groups interested in the planning legislation, the HIA distinguished itself by being the only group that was completely intransigent and unwilling to participate in a mediated compromise.”

“By their actions the HIA has marginalised itself and its membership to the point of virtual irrelevance,” he told InDaily.

Gardner hit back, saying the HIA “did marginalise itself, and stay strong to its true beliefs and member policies”.

“Far from being irrelevant, it’s become a major and greater-recognised industry association for remaining consistent to our members’ beliefs and policy,” he said.

Gardner conceded it had lost the day on the growth boundary and levy, saying “the bill’s done and dusted”.

“It is what it is… we’re just trying to digest exactly what did spit out the other end,” he said.

However, he remained defiant on the prospects of future amendments, saying: “That’s not to say that in the future it can’t be revisited.” 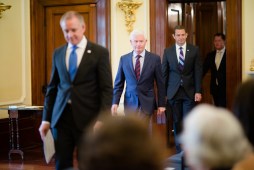 “There’ll be a change of ministers at some stage, and opportunities for the bill to be reviewed… but that’s long-term.”

Of the fracas with the Property Council and UDIA, he emphasised that they were only at odds on the levy, and at one over other key aspects of the bill.

“That happens,” he said.