In October, the council endorsed a new licensing regime for city food trucks, and a rule that “no more than 10 Mobile Food Vending Operators are to be allowed to operate before 6pm on any given day, excluding special events in the City of Adelaide”.

However, some councillors have argued the limitation would only apply to existing vendors under the new licensing scheme to be enforced from December.

If the rule is only to apply to the first category (existing vendors) then the effective daily limit would be 20 city food trucks.

A council spokesperson said this morning that it had received legal advice on the cap.

The council is also running an infographic on its website – see below – which says that 20 food trucks will be allowed to operate in daytime hours under the new scheme. 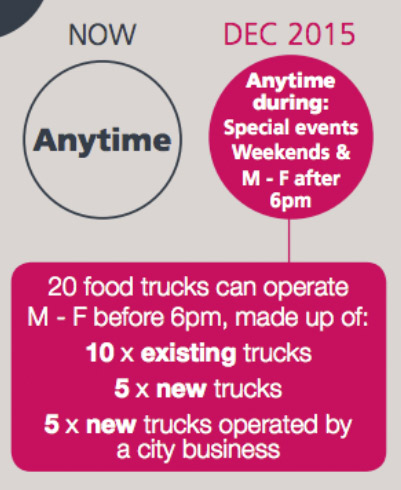 “In regards the infographic, [council] administration has received legal advice on the decision of council from the 27 October meeting,” a council spokesperson told InDaily this morning.

The spokesperson later advised that the legal advice meant the council had to clarify the rule.

A report will be presented to a council committee meeting in December recommending changes to the Mobile Food Vending Guidelines to clear things up.

Councillors will be presented with an amendment to the original motion “to enable clarification regarding the three categories of MFV permits available and the number of MFV operating at any one time before 6pm, excluding special events”.

The daily limit on the number of food trucks in the city was a lightning rod for Premier Jay Weatherill, who threatened to intervene to override the council.

Last week, InDaily revealed a discussion paper overseen by Labor MP Chris Picton with detailed proposals to do just that.

The proposals would take away most of the powers of councils across the state to regulate food trucks and open state-owned train stations and Park ‘n’ Rides to food truck trading.