In a year of relatively volatile movement in the Adelaide radio ratings, FIVEaa recorded losses of listener share across its schedule, headlined by a particularly poor result in breakfast, where it was the leader a few months ago.

Since Clarke lost the breakfast ratings to her FIVEaa rivals David Penberthy and Will Goodings in July, she has progressively lifted her ratings performance to establish a powerful lead for ABC Radio Adelaide.

In today’s GfK survey six figures, which cover July 11 to September 18, she has put on 1.7 percentage points to hit 17.9 per cent of listener share – the most dominant shift of any across the Adelaide radio landscape.

Of greater concern to the station’s management will be the consistency of losses for FIVEaa across the schedule, including in Evenings, where it was previously the perennial winner.

Overall, FIVEaa is now placed equal last with struggling SAFM of all the Adelaide stations. Only the ABC’s national stations ranked lower than FIVEaa and SAFM, which did improve its position slightly.

Mix 102.3 was steady at the top of the list, followed by ABC Radio Adelaide, which maintained second place. Cruise replaces FIVEaa in third place, followed by Nova and Triple M, with SAFM and FIVEaa equal last of the local stations.

All of the national ABC stations increased share in the Adelaide market.

Monday to Friday and Breakfast ratings for the sixth survey period of 2021 – July 11 to September 18. Source: GfK 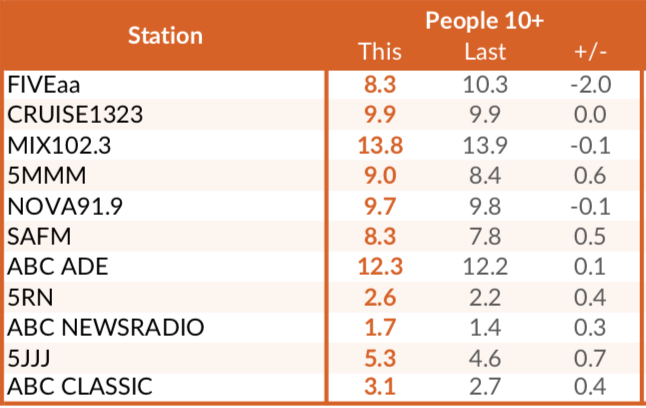 In the Mornings shift, Mix maintained its lead, followed by ABC Radio Adelaide.

In Afternoons and Drive, Mix held on to the lead. Nova was second-placed in Drive, followed by the ABC’s Jules Schiller. FIVEaa’s sports program sunk to last place among the local stations, with rival Triple M easily overtaking it.

In the Evenings, where FIVEaa’s line-up of Jon Blake followed by Matthew Pantelis has led all year, the pair lost first position to Mix but still leads talk rival Peter Goers on the ABC. Weekends were a disaster for FIVEaa after a generally poor year, losing 3.1 percentage points of listener share to sink to last position. Mix was again the weekend listening of choice for the largest percentage of Adelaide listeners.

Looking at the demographic data, both the ABC and FIVEaa lost share in the oldest age brackets, which are most significant for both stations.

For FIVEaa though, its performance in younger age groups would also be a concern. For people aged 18-24, for example, FIVEaa previously had 7.1 per cent of listener share – that plummeted to a tiny 0.1 per cent in this survey. The ABC, by comparison, had 3.4 per cent of that age group, up from a tiny 1.3 per cent.