The news-rich period from September 20 to November 28 proved to be a positive one for the local ABC station, with the highest percentage increase in listener share in the Adelaide market lifting the station from fifth to second in the overall pecking order.

On weekdays, the ABC was the leading station over the period.

In breakfast, Clarke cemented her lead over second-placed rivals, FIVEaa’s David Penberthy and Will Goodings. Clarke now leads the shift with 15.9 per cent of listener share, compared to FIVEaa’s 12.2 per cent.

Overall, leading station Mix 102.3 had the biggest fall, losing 1.7 percentage points to retain a relatively slender lead at the top with 11.7 per cent of share. ABC Radio Adelaide was in second place with 11.2 per cent.

Cruise moved into third position, with FIVEaa and Nova tied in fourth, followed by Triple M and SAFM.

In the morning shift, Mix held onto a narrow lead, with the ABC’s David Bevan rising fast into second place. Mix also maintained its lead in the afternoon despite losing share.

It was a similar story in drive, with Nova holding the lead despite losing share. In the evening shift, FIVEaa had its strong lead shaved. In that shift, the ABC’s Peter Goers performed strongly, with a 2 percentage point lift to cement his position in second place. 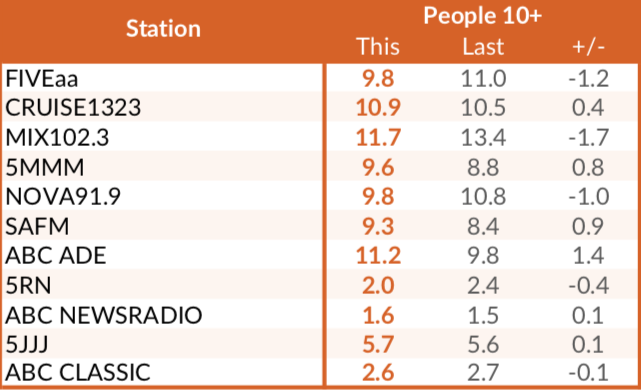 The demographic data showed a strong performance for the ABC in the over 65 bracket – also the age group where FIVEaa lost most share.

In the final survey of 2019, FIVEaa won breakfast ahead of the ABC, with the national broadcaster fading overall.

The data this year, compiled by GfK, points to a competitive year ahead at the top of the ratings table, with changes in key shifts in some commercial stations.

Mix will go into 2021 without long-standing breakfast announcer Jodie Oddy, who has quit, and cost-cutting at FIVEaa has trimmed the sports drive show to a single announcer – Stephen Rowe.