FIVEaa’s breakfast team of David Penberthy and Will Goodings lead in the key shift despite losing listener share, to sit at 13.8 per cent.

Previous leader, ABC Radio Adelaide’s Ali Clarke, lost more ground than her commercial rivals to fall to second place with 13.4 per cent of the audience.

Overall, little changed at the head of the leader board, apart from the ABC’s local station losing share to sit in equal fourth place alongside rising AM music station Cruise 1323.

Perennial winner Mix 102.3 extended its lead after a relatively poor previous survey, followed by FIVEaa which marginally lost share but retained second place, while Nova 91.9 was unchanged in third place.

As well as breakfast, FIVEaa holds the lead in mornings – hosted by veteran Leon Byner – and evenings, again led by veterans Jon Blake (7-8pm) and Jeremy Cordeaux (8pm to midnight).

Mix dominates the afternoons, while Nova retained its lead in Drive.

ABC Radio Adelaide lost share in every shift, including weekends, apart from evenings where Peter Goers took back second place from Nova. 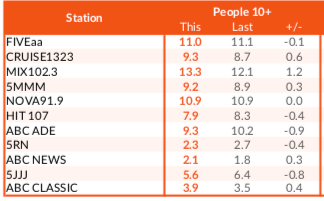 Winter seems to be a tough period for the local ABC station.

In the same survey period last year, the ABC also lost ground across the schedule, only to bounce back later in the year.

Looking at the demographic data, the ABC’s problem in this survey was only with people aged 65 and over – an audience segment in which it usually dominates. In this survey period, the station lost 5.3 per cent of audience share in this demographic segment.