The second GfK ratings survey of the year shows Clarke has re-established a clear lead after being locked in equal first position with Mix’s Jodie Oddy and Mark Soderstrom in survey one.

Her talk rivals at FIVEaa, David Penberthy and Will Goodings, lost ground, finishing third with 11.1 per cent of listener share. The pair had taken the breakfast ratings crown in mid-2018, before falling away at the end of the year.

It would be a satisfying result for the ABC breakfast team, with their long-time former colleague, Matthew Abraham, joining Penberthy and Goodings this year as a regular guest commentator on politics. 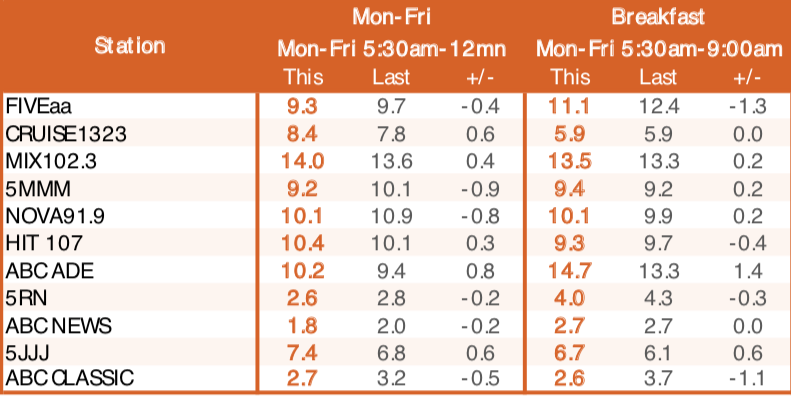 Overall, Mix 102.3 extended its lead, dominating the morning and afternoon periods, and performing solidly in drive.

Nova 91.9 slipped back a little but retained second place, just ahead of ABC Radio Adelaide which moved up a place.

Next in line was Hit 107, then Cruise, which just shaded FIVEaa. 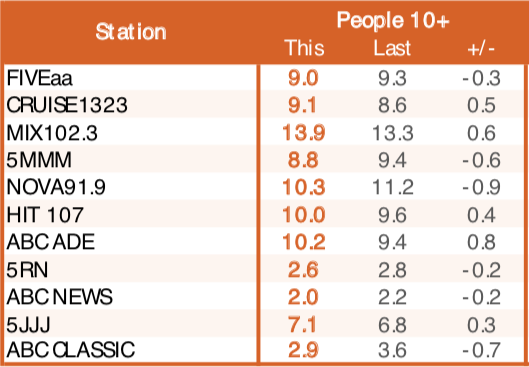 FIVEaa and Triple M have both experienced unhappy starts to the year.

FIVEaa’s morning announcer Leon Byner has been overtaken by his ABC talk rival David Bevan. FIVEaa’s sports drive program wasn’t helped much by the beginning of the AFL season and lost ground to sit in sixth place, with the ABC drive program, hosted by Jules Schiller, now within striking distance.

Triple M managed small improvements in breakfast, evenings and weekends, but it wasn’t enough to counterbalance big losses in mornings and afternoons.

Disclosure: The author is an occasional unpaid guest on Ali Clarke’s program.