Music station Mix 102.3 consolidated its longstanding position at the top of the ratings table, extending its lead in work hours and drive and pulling equal with previous leader FIVEaa in the evenings shift.

However, the biggest story in the fourth GfK ratings survey of the year is the reversal of fortunes for the two local talk stations – FIVEaa and ABC Radio Adelaide.

In the previous survey, ABC Radio Adelaide made a strong showing, led by Ali Clarke in breakfast who became the clear leader in the key shift.

That situation has reversed in the latest survey, covering April 22 to June 30, with ABC Radio Adelaide losing listener share across every program and FIVEaa doing the opposite in all shifts bar evenings.

In breakfast, Clarke lost 2.1 percentage points to fall behind both Mix and FIVEaa, where presenters David Penberthy and Will Goodings now lead on 14.4 per cent. 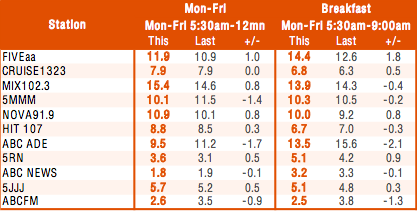 The ABC has tinkered with its afternoon, drive and evening schedules this year, shortening its World Today and PM currents affairs programs and shoehorning a nationally syndicated music program into the early afternoon slot.

FIVEaa’s morning presenter Leon Byner had a strong survey, to taken a clear second place to Mix in that shift. 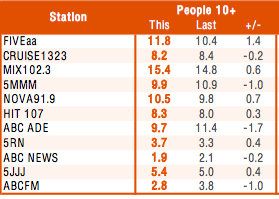 The talk ratings battle has been won and lost, as usual, in the older demographic segment: FIVEaa increased its share strongly among people aged 65 and over (up 7 percentage points), while the ABC fell back (down 1.8 points).

Overall, Mix remains at the top of the ratings, followed by FIVEaa – up from fourth place in the last survey – then Nova, which enjoyed a stronger showing, Triple M and ABC Radio Adelaide.