One newspaper town or one media town?

The Federal Government has released yet another attempt to reform the nation’s media laws, and this time it looks like it might be successful.

All of the major media companies are on board, which isn’t surprising given the reforms would cut television licence fees and scrap long-standing cross-ownership laws.

The latter is of particular interest in South Australia where the moves could see Rupert Murdoch’s News Corp grab control of Adelaide’s only commercial talk radio station, an FM music station and Channel 10, in addition to its suite of newspapers.

The reforms, which need to get through parliament, would repeal the “two out of three” and “75 per cent” audience reach ownership rules, among other sweet moves for media companies, such as the abolition of broadcasting licence fees.

There are other reforms, such as restricting gambling ads and new local content rules, but the most significant changes for Adelaide would be the repeal of rules in the Broadcasting Services Act 1992 that prevent a person from controlling:

This change would have a potentially huge impact on the Adelaide market, which is rare among Australia’s major capital cities in that the media landscape is dominated by one major company.

Rupert Murdoch’s son Lachlan – the co-chairman of News Corp – has interests in other media important in Adelaide: he owns the Nova Entertainment radio network which includes FIVEaa, Adelaide’s only commercial talk station, and the youth music station Nova 91.9.

He is also one of three moguls who are propping up the failing Ten Network.

Tim Burrowes, the founder of marketing and media website Mumbrella, believes the reforms have a good chance of passing the Senate and, if they do, he believes it’s highly possible that News Corp could have a grip on key radio, television and newspaper assets in the Adelaide market.

“If these changes go through the parliament then I think it’s more likely than not that we will see a big consolidation (of media ownership),” he told InDaily.

“In Adelaide, that consolidation could be massive.

“We are getting close to having not only one-newspaper towns, but one-media towns.”

Burrowes says once media ownership has reached that level of power, it becomes very easy for big media companies to gather a bigger and bigger piece of local ad spend.

That, in turn, would freeze out alternative players.

Media agency Starcom believes, however, that a freeing up of the ownership laws would be beneficial to advertisers, with little effect on consumers.

“The discerning news consumer, who may have some concern about the effect of cross media ownership, knows how to source an alternate viewpoint anyway,” Starcom’s Mark Clemow told InDaily. “Will the media conglomerates use cross ownership to influence audiences? Perhaps, but doesn’t that happen now anyway and to what advantage in a country like Australia?”

Other local industry figures believe the consolidation of ownership is a matter of life and death for some companies.

One, who did not wish to be named, said “these television companies need to merge with other media companies not only to survive, but to maintain the relevance of the medium”.

“With declining audiences for free-to-air television, these stations needs to be part of bigger groups so that television can be sold in context, rather than as the primary product. Then the other types of media can be combined into one sell. It’s really also the last roll of the dice for a lot of media companies to defend themselves against the growing penetration of the likes of Google, Amazon and Facebook. They need to be a combined force to compete.”

How this shakes out, and what it means for journalism, is open to speculation.

Burrowes believes, for example, that a News Corp takeover of Ten could have huge ramifications for the network’s newsroom. It would make sense, he reasons, for Ten to replace its news service with a feed from Sky News – another Murdoch asset.

“Deep job losses at what is already a tightly run ship will, I’m sure, be a certainty,” he wrote this week. “Outsourcing the entire news operation to the News Corp’s Sky News starts to seem logical.”

The prospect of consolidation might have implications for the already falling editorial staffing levels at The Advertiser, with a round of redundancies targeting photographers underway now.

The latest figures from Roy Morgan Research show that overall newspaper readership grew in the 12 months to March 2017, thanks to the audience continuing to make the transition from newsprint to digital.

However, there were some notable exceptions – including The Advertiser, the West Australian and The Saturday Paper, which all lost readers.

The Advertiser, against trend, increased its print readership slightly but lost on the digital front, leading to an overall decline in readership of 7.1 per cent, year on year.

Despite a continuing decline in print circulation, both of Australia’s largest newspaper publishers – News Corp and Fairfax – have increased overall audience due to growth in digital.

Fairfax is leading the charge in digital, with 83 per cent of its audience using digital platforms compared to just over a third reading its print editions. 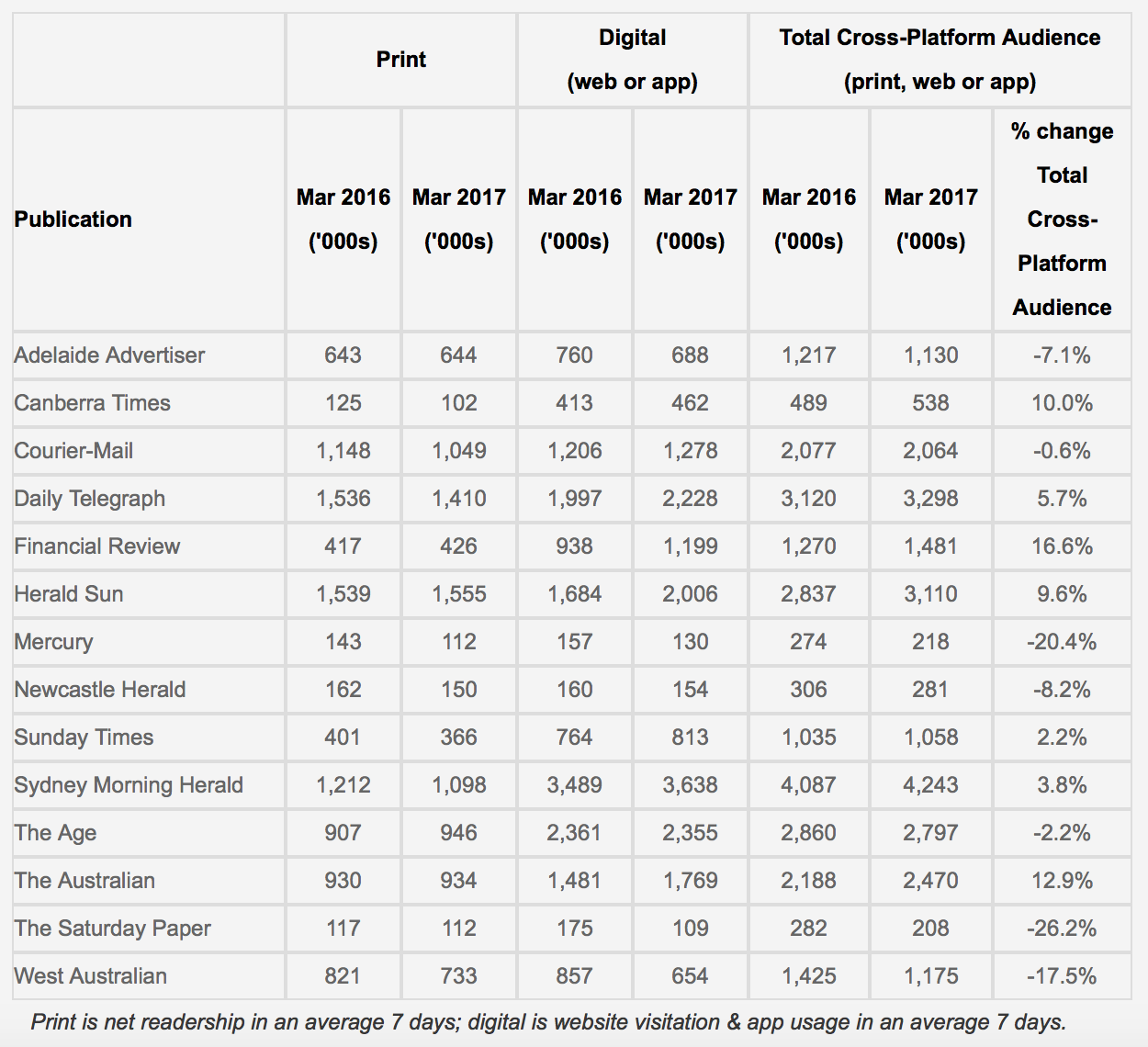 A concept developed by Adelaide advertising agency KWP! has won the SBS “Diversity Works Challenge” – a victory that will give client Surf Life Saving Australia $1 million in advertising space on SBS.

The challenge calls on brands and agencies to develop a campaign that demonstrates Australia’s diversity.

The winning campaign will give SLSA one of the biggest safety campaigns in its history, with the concept also promoting diversity.

According to SBS, the KWP! campaign “draws attention to the indiscriminate nature of the dangers of the ocean and prompts people, regardless of colour, language, religious beliefs, sexual orientation or cultural differences, to think carefully about how and where they enjoy beaches and waterways”.

“The concept integrates the diversity of Australia into the fabric of the campaign and delivers a simple and focused creative strategy that will assist Surf Life Saving Australia to deliver their objective of saving lives.”

The campaign will premiere on SBS in the second half of 2017.

A new industrial revolution powered by artificial intelligence has been predicted for many years.

In the media, it’s already here, with The Washington Post launching an AI news writing process called Heliograf during the Rio Olympics, and going on to use it to cover 500 races on election day last November.

Next week, InDaily is joining with Mumbrella to give an Adelaide audience the chance to hear from experts in the field.

Keynote speaker Stewart Gurney, the national head of media agency PHD Australia, will try to unpack what an AI-driven media and business landscape might look like.

“Each technological epoch is built on top of the previous,” Gurney says.

“The next epoch is increasingly considered to be the AI revolution – where the world’s information is hierarchically ordered to create what is ostensibly consciousness, but with intelligence greater than every living human being on the planet.

“This is the endeavour of a number of organisations, with Google leading the charge. Ray Kurzweil, the head of engineering at Google, thinks they will get there by 2029.”

Following Gurney’s keynote, Tim Burrowes, founder and content director of Mumbrella, will chair a panel discussion, including AI expert Professor John Roddick, the deputy executive dean for the Faculty of Science and Engineering at Flinders University.

If you’d like to be part of Thursday’s lunch event at the Hilton, details and tickets are available here.

Media Week will be published regularly on a Friday. If you have any tips or thoughts on the media in South Australia, send an email with the subject header “Media Week” to: editorial@solsticemedia.com.auSave