Thank the Lord for the Festival Plaza

The complete revamp of the unloved and long-neglected Festival Plaza was revealed by the State Government last week, marking the end of the funky Hajek scuplture, with its bold red, white, yellow and blue shapes.

Everyone’s hated it for a long time but, back in 1977, the Labor Party’s advertising honchos thought it was the perfect example of right-on, trendy, go-ahead South Australia’s zeitgeist.

It’s a celebration of many things now defunct or fading – forestry (sold off), automotive manufacturing (going), steelmaking (buggered), skivvies (only worn by Greens leaders in GQ magazine shoots) and the aforementioned plaza (about to be ripped up).

The chorus is a doozy – “Thank the Lord for South Australia”.

Can we expect Jay Weatherill to do something similar for the 2018 campaign?

You can rule out Weatherill being pictured in a woolly jumper and a skivvy, but you can be assured that – more than four decades after Dunstan’s campaign – the rebuilt Festival Plaza will be part of his message.

The Raucous Caucus fires up

As everyone knows, it’s been a terribly dull federal election campaign so far – and we’re only halfway there.

The major parties haven’t hit the airwaves in earnest yet, as there is still an entire month to go.

Thank the Lord for Channel 44 – the local community TV station – which is attempting to add some humour to proceedings.

Using all volunteers, the station filmed the first episode of its weekly political game show – the Raucous Caucus – at the Rhino Room on Monday night and it’s now available to view (see below).

Along the way they play games including “Silence of the Lambies” and “Akubra Matata”.

This week’s edition is only available online. From next week the show will also be broadcast on air, in the Thursday 7.30 timeslot.

In a feather in the local station’s cap, community stations in Melbourne, Brisbane and Perth will be airing the show from next week.

One of the highlights of the SA Media Awards last weekend, apart from the Tiser’s cardboard cut-out of Water Minister Ian Hunter hitting the dance floor, was the elevation of newspaper trailblazer Marg Ralston to the Hall of Fame.

Ralston, who made her career at the defunct Adelaide afternoon daily, The News, was the first woman appointed as sports editor of a major metro paper in Australia.

Ralston’s achievements included encouraging a new generation of women to report on sport, but it wasn’t always easy.

She spoke at the awards ceremony about the barriers and doubts thrown her away, including from the likes of Ken “KG” Cunningham who she said questioned whether she had the capacity to fix the newspaper’s notoriously horrible form guide.

And then there was the general culture of the newspaper, which treated women more commonly as objects than legitimate subjects for stories.

She went to leaders up the line on the newspaper and said: “If we’re going to be fair dinkum about our coverage of women’s sport, you need to get those busty women with wet T-shirts off page three. And it happened – we did it.”

Hughes PR has made two new appointments which it says will bolster its “content creation capabilities”.

The Rundle Street company says the appointments are in line with industry research showing social and digital media are among the top three drivers of growth among PR firms.

Our ongoing examination of the local media’s burst water main obsession has now made the leap to charts!

As you can see, there’s barely any correlation between the number of bursts and the number of stories and media inquiries so far this year. In fact, the peak of stories this year came in a month when water main bursts actually fell in comparison to the previous year.

Comparing the period from January to May in 2015 and 2016, we can see there have been 20 more bursts and leaks in Adelaide this year – that’s an average increase of four each month (hardly an epidemic).

By contrast, SA Water says the number of media inquiries it has received about burst water mains over the same period has increased exponentially – from 48 in 2015 to 215 this year.

And yes, I realise the irony that this column’s obsession with the media’s obsession has added to the figures, so we’ll swear off bursts and leak stories – at least for this season. 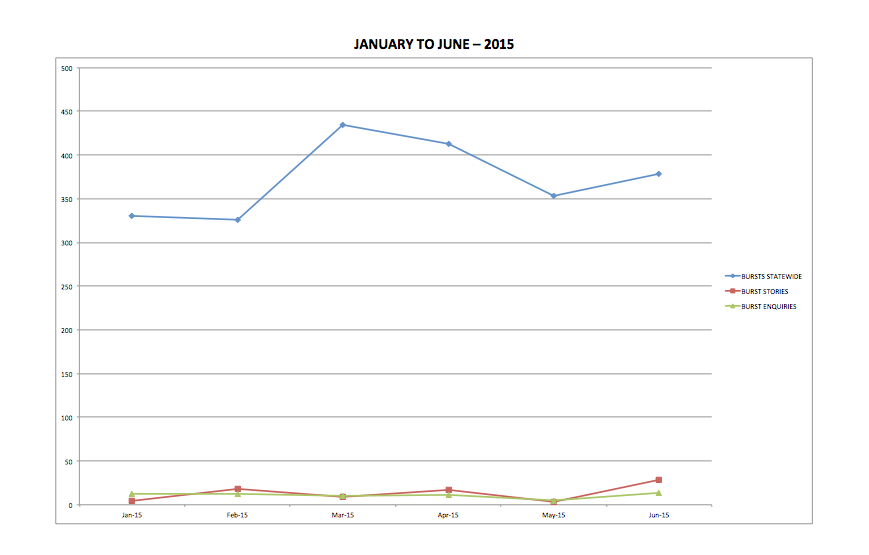 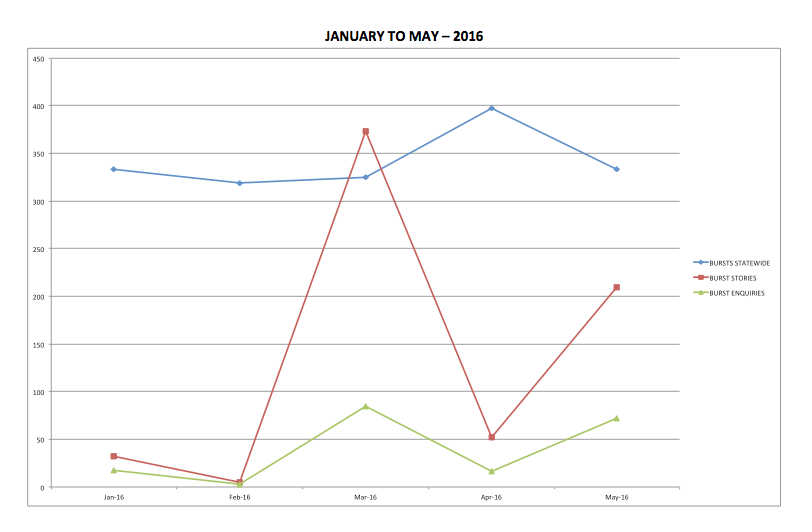 This week’s winner comes with a caveat, and without much joy. New York Times op-ed writer Roger Cohen, who focuses on international affairs and diplomacy, has cast his experienced eye on Australia.

In a piece titled “Australia Does Anxiety”, the latest in a series covering local topics such as the Great Barrier Reef and our asylum-seeker policy, Cohen asks if we are ripe for the “politics of anger” sweeping the world, questioning whether “some of the angst endemic to the developed world, with its lost manufacturing jobs and squeezed opportunities, has seeped of late into the irreverent Australian psyche”. Read it here.

Closer to home, InDaily’s own Bension Siebert, who on Saturday was named Young Journalist of the Year at the SA Media Awards, has forensically examined a massive local government streetlight tender. From “nothing to see here” on Monday, it has moved swiftly to the councils in question deciding on an independent assessment, to the Ombudsman asking questions.

David Washington is editor of InDaily. Media Week is published on Fridays.