The intensifying battle between Seven and Nine for news supremacy in Adelaide has kicked up to a new level, with a key news executive shifting allegiances.

Salter’s currently on “gardening leave” from Nine. He was (understandably) marched from the station’s flash new city office in November after informing management that he would be joining Seven after the best part of a decade at Nine.

It’s been a relatively good year for Nine news. As well as opening a new high-tech studio in Hindmarsh Square, they are no longer the ratings whipping boys of Seven. While Seven is still the clear leader, winning most nights, Nine has pulled back the average ratings margin by a large measure and the schedule this year is dotted with victories for Nine. Last year, Seven news won every single ratings night.

Salter was reluctant to talk to Media Week, probably because he’s in the uncomfortable position of still being on the Nine payroll, however he did confirm his new job at Seven.

There’s some intriguing back story to this move.

It’s widely known that McPherson and Salter worked closely together at Nine, particularly on bringing the Adelaide operation back into the network fold after previous owner WIN left town.

The pair were also intimately involved in Nine’s transition to an hour-long bulletin – a move that has worked well so far.

Drawing the dots, it wouldn’t be surprising to see Seven also jump to an hour-long bulletin, in which case they would likely need more journalists.

If that eventuates, there could be more staff movement in the offing. The tightening TV news battle is good news for journalists – particularly those looking for leverage with their current employer. In fact, there’s one relatively young TV reporter about town who’s going to be buying the first round for the foreseeable future.

This column broke the news last week that respected ABC 891 broadcaster Michael Smyth had been given the axe by management.

The Drive presenter finished up last night, opting to take some outstanding annual leave rather than work until the Christmas break.

He was a complete professional to the end, spending most of his final two shifts contributing to the ABC’s excellent rolling coverage of the brutal bushfire that ravaged South Australia’s mid north this week.

Why he wasn’t offered a new contract remains a mystery, with ABC management only saying that it wanted to “renew and refresh” its line-up.

Many listeners – and colleagues – are unhappy that Smyth’s smooth contribution has been jettisoned and took to social media to complain and/or praise the media veteran.

@MichaelSmyth_ @DavidWashingto2 @891adelaide all the best Michael; the decision to replace you only deepens the resonance of my handle…

@MichaelSmyth_ You shall be missed, even from me over here in Broome and I can't believe the ABC has done this. What was Aunty thinking???

Magnificent effort by you and @891adelaide team informing SA abt #SAfires. As Goers said, “On yer @MichaelSmyth_ " https://t.co/URxaU7G50P

Smyth signed off last night with a minimum of rigmarole, simply thanking his producers and listeners.

Of all the journalistic cliches, the “schoolgirl” is one of the creepiest.

Despite the obvious fact that a “schoolgirl” could more economically be described as a “child”, the cliche persists.

Then there’s the “Catholic schoolgirl” designation, which made another appearance this week in local reports of three girls who allegedly robbed a tourist in Adelaide on the weekend. The youngest, aged 12, reportedly unloaded in a most impertinent way on the magistrate hearing her case before apologising.

You never hear about Baptist, Anglican or Pentecostal schoolgirls. Why would that be? 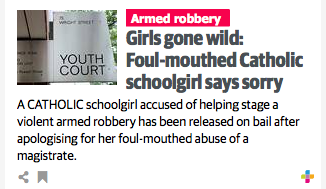 Back in October, the Minerals Council drew claims of insensitivity in South Australia after it rolled out its “Little Black Rock” ad campaign in praise of coal, despite the impending closure of this state’s only coal mine at Leigh Creek.

Alinta closed the Leigh Creek mine last Tuesday, but that didn’t stop the council pushing its coal campaign on to the Adelaide Now news website this week.

In October, a council spokesperson said the South Australian campaign would be reviewed.

“Obviously this [campaign] was done before the Alinta announcement,” he said.

With the coal industry now dead and gone in SA, the mining lobby still believes we still need to be convinced about the amazing properties of the “Little Black Rock”.

Bizarre. What are they selling us?

The SA media has mostly performed well, sometimes brilliantly, in response to the bushfire crisis, notably some great vision and reporting on TV news and excellent work by The Advertiser’s photographers in particular.

However, once again, ABC local radio has shown why we should continue to pay our few cents a day for a national broadcaster.

891’s rolling coverage has been outstanding, with presenters across the roster smoothly juggling the need for constant updates from emergency authorities with a flood of calls from the public.

The best indication of the importance of the ABC in our state? The way dozens of people from the fireground called in to share their own stories, information and offers of help.