According to research house Chant West, the typical super fund with between 61 and 80 per cent in growth assets is expected to fall by 5 per cent this financial year.

That would mark the worst performance since the GFC and only the fifth financial year in which super funds have delivered a negative result since the inception of compulsory super in 1992.

Chant West senior researcher Mano Mohankumar said the falls in super were caused by the recent slump in global sharemarkets.

But he noted the super sector had fared much better than the sharemarket because its investments were diversified.

A share market is considered a ‘bear market’ once it has fallen 20 per cent from recent highs. 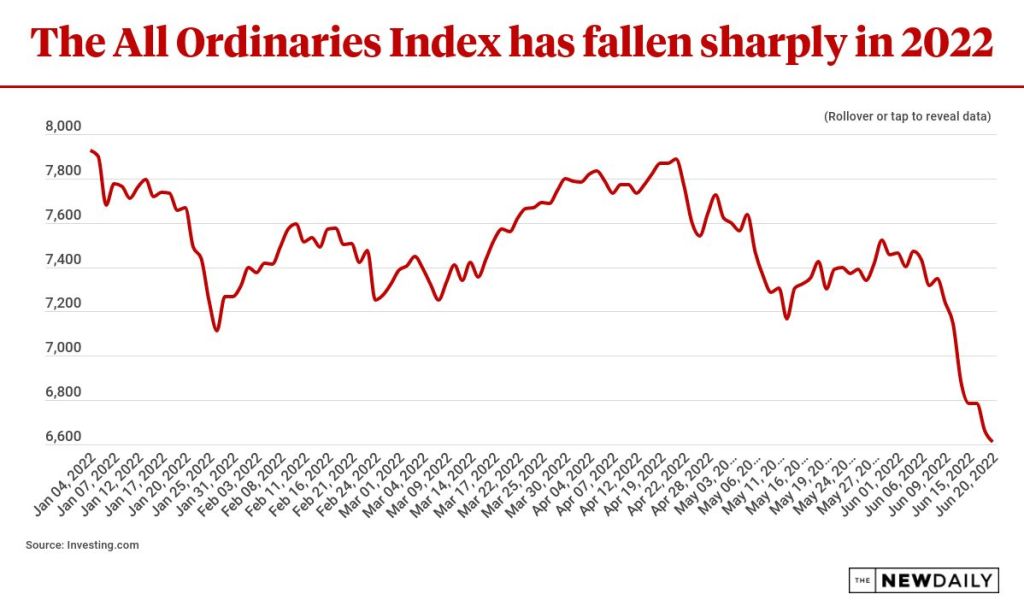 Overall, listed Australian shares in superannuation portfolios – as measured by Chant West – were down 5.5 per cent.

But international shares, hedged against currency movements, were down significantly more at 16 per cent.

“Conservative allocations with between 21 and 40 per cent in growth assets will likely return negative 3.5 to 4 per cent,” he said.

Conservative allocations are suffering due to movements in the bond market.

“It’s been a terrible year for bonds. Australian bonds are down 12 per cent and international bonds will also be down by double-digit figures,” Mr Mohankumar said.

That’s because rising rates mean that new bonds are issued at higher interest rates, which in turn means that existing bonds have to fall in value to deliver the same interest yield to investors.

Although super accounts will fall in value this financial year, members have done very well in recent times.

In the year to June 2021, super returns rose a stunning 18 per cent as markets recovered from the sharemarket collapse at the start of the pandemic.

“The likely 5 per cent decline is only the fifth negative year in 30 years of compulsory superannuation and two of those declines were during the global financial crisis,” Mr Mohankumar said.

If super continues to grow at the same rate it has done in recent years, then the losses of the current year will be regained later in the decade.

An increase in the superannuation guarantee by 0.5 percentage points to 10.5 per cent from July will also help members recover from recent losses.