The grim outlook was flagged by RBA boss Philip Lowe last week when he said it’s “not unreasonable” to expect rates to rise from 0.35 per cent to 2.5 per cent as the central bank seeks to curb inflation.

Economists said such rises would push the official cash rate to its highest level since 2015, sparking a double whammy of higher mortgage bills and large falls in home values.

Homeowners with a typical $500,000 variable home loan would see their minimum monthly repayments rise by $698 – or $174 a week – if the official cash rate rose to 2.5 per cent, according to new Canstar data.

Meanwhile, the RBA has said home values could fall by 15 per cent if rates hit 2.5 per cent, eroding household wealth at the same time that loan costs skyrocket.

And though many households are poised to weather this storm after building up loan buffers during the pandemic, KPMG senior economist Sarah Hunter said a forecast decline in real wages during 2023 would compound the pain for households, leaving the RBA with a tough balancing act.

“For some people, it’s going to be very challenging,” Hunter said.

BIS Oxford senior economist Sean Langcake said 2.5 per cent is the RBA’s best estimate of what represents the ‘neutral’ cash rate in Australia, which is why Dr Lowe signalled that level.

Basically, 2.5 per cent is the bank’s estimate of the point at which the official interest rate is no longer stimulating the economy and pushing up inflation, but also not acting as a handbrake on economic growth.

“The RBA probably sees 2.5 per cent being where they settle in the long run.”

Getting to this point is much easier said than done though.

Hunter said that because prices for essentials like groceries and petrol are rising faster than wages, households will be less able to absorb higher mortgage bills and declining property wealth.

According to the RBA, headline inflation will finish 2022 peaking at 5.9 per cent, far above forecast wages growth of 3 per cent.

This implies a 2.9 per cent decline in household purchasing power.

“[Rising rates are] a natural progression into a tightening cycle, but this time it’s reinforced by the type of inflation we’re getting,” Hunter said.

“The RBA is walking this tightrope where they need to cool down demand so the economy grows more slowly, but they don’t want to go too hard because you can generate recessions.” 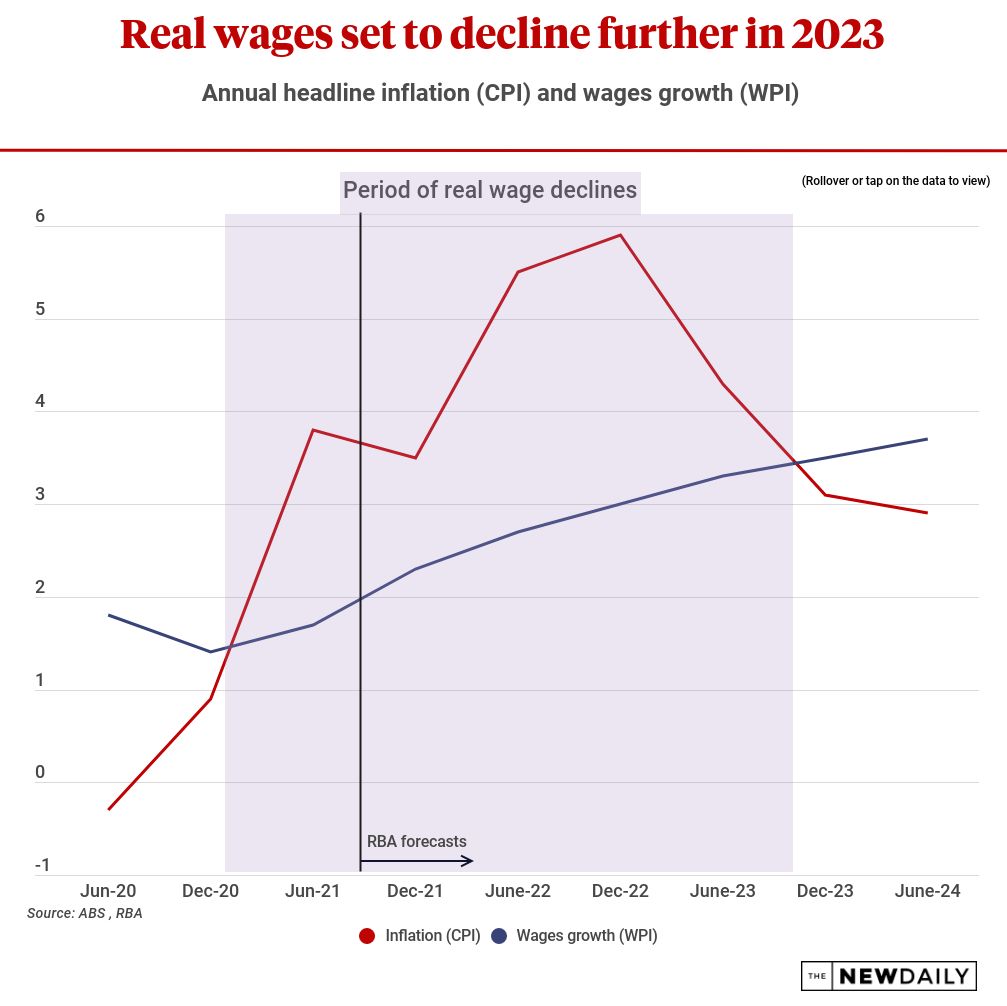 In other words, the fear is that rising rates will combine with the cost-of-living squeeze already hurting household budgets – forcing consumers to bunker down and stop spending.

Households with a variable rate mortgage of $500,000 are already copping a $68 increase to their monthly minimum repayments after the RBA raised the cash rate to 0.35 per cent last week.

These mortgage bills could increase by another $600 if rates hit 2.5 per cent, Canstar said.

Hunter said predictions that house prices will also fall as rates rise will make the pain worse, particularly for activity in industries tied to property such as construction and household goods.

The RBA has said real house prices could fall 15 per cent if interest rates reached 2.5 per cent.

Such falls, also predicted by the major banks, would wipe tens of thousands of dollars from the wealth of homeowners, with recent buyers set to be hardest hit by the looming market correction.

The extent of the financial pain will be largely determined by how fast rates rise, Hunter and Langcake said.

Unfortunately, not even the RBA knows how quickly rates will go up.

Lowe said last week that the bank will keep a close eye on the economy to determine what rises can be absorbed as it looks to subdue inflation.

The RBA prefers to raise in 0.25 percentage point increments, implying the earliest that rates could reach 2.5 per cent would be February 2023. (The bank’s board does not meet in January.)

Economists don’t think such a steep rate hike cycle is very likely though.

The pace the RBA chooses will be influenced by a few factors providing confidence that households can weather the financial storm.

First, aside from the $240 billion in additional savings households have socked away during the pandemic, many mortgage holders have built up large buffers in their loan repayment timelines.

In fact, 40 per cent of households with variable loans won’t pay more until rates rise above 2 per cent because they’ve been repaying more than their minimum home loan requirements during the pandemic.

This also doesn’t account for mortgage holders who fixed their loan at rock-bottom rates during COVID-19 and don’t have to worry about rates until their agreement expires in up to four years.

Additionally, Langcake said the RBA will be watching the strength of the labour market for a barometer on how well households can absorb interest rate increases.

With unemployment currently near record lows at 4 per cent, most Australians are bringing in an income, even if wages across the economy aren’t keeping pace with the rising cost of essentials.

This article was first published by The New Daily. Read the original article here.