Nine international flights touched down and departed from Adelaide last week to mark Australia’s borders reopening to tourists from around the world, while a further nine Qantas flights transiting through from Melbourne also departed Adelaide for India.

Adelaide Airport managing director Brenton Cox said the reopening marked a “watershed” moment for the company and has “helped to lift the Omicron fog from everyone in the industry”, but was cautious about the timeline for a full recovery.

The airport was last week operating at around 10 per cent of its pre-pandemic international flight capacity, he said, up from seven per cent the week before.

“Clearly there isn’t a massive rebound that comes straight away but just a slow burn and build,” Cox told InDaily.

“Traditionally Adelaide is quite a strong outbound market: around 70 per cent of people travelling internationally to and from Adelaide are from Adelaide.

“So it’ll be only once the Adelaide public regains the confidence just to get out and reconnect with the world when we start to see any sort of volume in terms of the international side of things.”

Just before the onset of the pandemic, Adelaide hit a new high for monthly international arrivals and departures. According to Australian Bureau of Statistics data, 559 international flights carrying 117,507 passengers passed through Adelaide Airport in January 2020 alone.

Since then, from June 2020 to December 2021, the airport has averaged just 2378 international passengers and 66 international flights a month.

Asked when Adelaide Airport was anticipating a full recovery of its international travel capacity to pre-pandemic levels, Cox said: “We’re pretty much aligned with … commentary coming out of IATA (the International Air Transport Association) and others: that’s the end of that ’24 calendar year or in some cases maybe mid ’25.”

“We clearly want to do everything we can do to make that happen sooner but it ultimately comes down to confidence – that’ll be the key determinant.

We still have to get over the perception around Australia that we’re closed for business, that message that we’re now open for business is going to take a little bit of time to filter through and we’re working really hard to do that.

Cox, who was elevated to the top job in December after more than eight years as an executive with the airport, also faces the challenge of winning back the international airlines which have stopped flying to Adelaide.

Emirates, Air New Zealand, China Southern, Cathay Pacific and Jetstar (international) all pulled their services out of Adelaide at varying points of the pandemic.

Of the nine international flights that arrived last week, five were from Singapore Airlines, three were Qatar Airways and one was Malaysia Airlines. 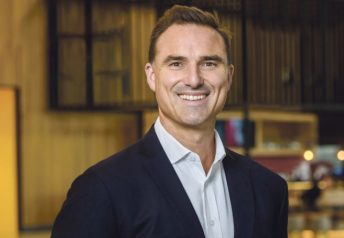 Cox said he is anticipating the return of Air New Zealand around July if New Zealand’s border rules are eased, while the airport would be working closely with Jetstar to open up the “huge market” for Adelaide to Bali flights in the near future.

“We’ve been incredibly well served with Singapore and Qatar who have been there throughout the worst of the pandemic and bringing back – under the cap – all of those travellers over the course of the last two years,” he said.

“Malaysia has been fantastic as well, they’ve been less regular but have run some more ad hoc services, and once some of those border rules on the KL (Kuala Lumpur) end open up a little bit more we’re hoping to rebuild those services.

“Where it gets a little bit more challenging is China Southern and Cathay [Pacific] because China and Hong Kong have quite hard border rules that are reported to continue to be in place for quite some time, so we’ll just have to see through all of that.”

Cox said it will also be a challenge to lure Emirates’ international flights back to Adelaide. The airline pulled out of Adelaide indefinitely in 2020 and posted a $US6 billion loss in FY21 – its first time without a profit in more than 30 years.

“In the short term, it means that Qatar and probably Singapore will be taking the lion’s share of that European traffic,” he said.

“In terms of Emirates specifically, their economy is incredibly tourism focused, so you can imagine that compared to some others it’s been probably hit a little bit harder.

“So when global tourism recovers, that’ll also be the sort of impetus for when Emirates can recover as well.”

It comes after a tough month for the aviation industry in which the Omicron variant’s hit to the economy began to show up in financial results and produced tempered expectations for the recovery of domestic and international travel.

Qantas’ half yearly results last week revealed an underlying pre-tax loss of $1.28 billion for the first half of FY22, worse than its $1.03 billion loss posted a year earlier.

Qantas Group CEO Alan Joyce said the Omicron variant had “pushed everything out by around six months”, with the national carrier forecasting its international capacity to reach 22 per cent of pre-COVID levels in the March quarter, lifting to 44 per cent in the fourth quarter.

Sydney Airport, meanwhile, in its final results release as an ASX-listed company, posted a loss of nearly $270 million.

Cox said Adelaide Airport’s push to rebuild its international services this year is “exactly what everyone else in the world is trying to do”.

“We just have to put our best foot forward in an ultra-competitive world to attract airlines, and we just have to get out there and really promote ourselves harder than anyone else to make sure that we get our fair share,” he said.

“Pre-pandemic we were leaking 35 per cent of our traffic to other airports in Australia – people couldn’t travel direct and they were travelling via Sydney or Melbourne – so our challenge is to kind of win our market share.”

Labor is yet to outline a similar commitment, with the Opposition’s core tourism pledge a $60 million spend on tourism marketing and events attraction. 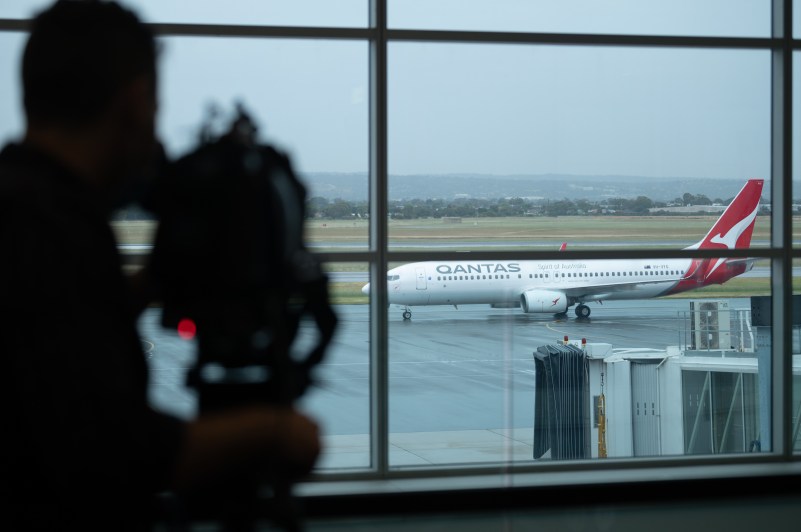 The prospects for a fast recovery in domestic travel appear more likely, with Adelaide Airport already operating at close to half of its pre-pandemic domestic capacity.

Following the re-opening of South Australia’s borders with NSW, Victoria and the ACT on November 23, Adelaide Airport processed just under 295,000 domestic and regional travellers in December 21.

In 2019, the airport was averaging around 615,000 domestic passengers a month, according to the ABS.

Cox said Adelaide was last week “cycling just under 50 per cent” of its pre-pandemic domestic capacity, up from around 40 per cent the week before.

“That has a little bit to do with the international borders opening as well because we know we’re finding people coming in Melbourne and transiting domestically into Adelaide,” he said.

“Tourism bookings are pretty good from Easter and there’s a little bit more lead time – people are starting to book in advance a bit.

“But people travelling for business [and] corporate purposes are leaving that booking a little bit later, so it’s a bit harder to predict.”

The latest commentary from Qantas forecasts domestic capacity to be at 68 per cent of pre-COVID levels in the March quarter, rebounding to 90-100 per cent in the June quarter. 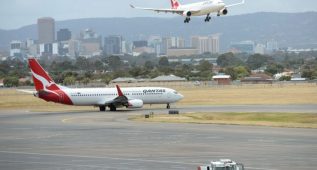 “We’ve probably been a bit more conservative than that in our forecasting but we’re obviously keen, ready, willing and able to accept higher performance than that,” Cox said.

“What we’re trying to do now is just help everyone get confidence back and that starts from within ourselves and more broadly in the community as well.

“We just want to get back to doing what we do and we want to connect people again.”