The latest BankSA State Monitor survey released at the end of October showed business confidence at 121.8 points, which – although down nearly 13 points from an all-time record of 134.6 recorded in June – is still higher than any other result published in the last 10 years.

The October poll, the last of three surveys this year, also shows the index has grown 13.3 points since November 2020, with 2021 marking the highest average year of business confidence recorded by BankSA for well over a decade.

The index has grown 6.4 points since the final pre-pandemic poll taken in February 2020, with confidence increasing by an average of 9.76 points in three of the last five State Monitors.

BankSA has attributed the year’s confidence surge to a variety of factors, including the JobKeeper “cliff” not materialising, South Australia’s overall avoidance of lockdowns, low interest rates and continued payroll tax exemptions.

The optimism uptick correlates with the South Australian business community’s reaction to other financial shocks. 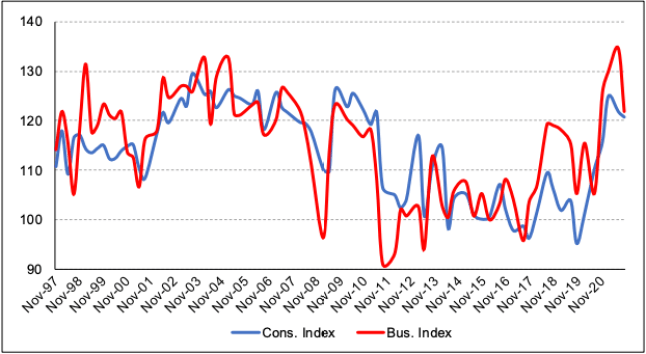 History of business and consumer confidence from November 1997 to October 2021 (Graph: BankSA)

Australia’s response to the global financial crisis prompted a more than 20-point increase in confidence over the course of 2009, reaching 123.2 points in August that year.

Similarly, the introduction of the GST in 2000 also eventually saw a 20-point increase in confidence, despite earlier business concerns about the impact on spending and consumption.

Executive Director of the South Australian Centre for Economic Studies Professor Michael O’Neil said confidence boosts after a crisis can reflect the amount of money flowing through the economy.

“So basically, people had income, that’s reflected when you have a look at sales at things like Harvey Norman and Bunnings and so on.

“I think it actually maintained economic confidence; a lot of small businesses have been hurt there’s no doubt about that.

“[But] that confidence is still there because income has been flowing through the economy despite the pandemic.”

The lowest recorded business confidence level in the State Monitor survey’s history came in August 2011, when the index bottomed out at 91 points after six successive falls.

At the time, BankSA attributed the decline to a raft of problems that emerged in the aftermath of the GFC, including declining share values, tightening credit and upward pressure on interest rates.

A decade on, the prospects for a similar decline post-COVID appear to be primarily centred around labour shortage concerns.

“The largest decreases in confidence occurred in industries such as retail, construction and recreational, which have been particularly impacted by recent border closures and associated restrictions, along with shortages in labour supply,” Firth commented on the latest State Monitor survey.

“It is understandable that businesses are now more cautious as they wait to see how the roadmap out of COVID restrictions progresses.”

The labour shortage concerns – along with the COVID surge in confidence – broadly align with the findings from Business SA’s quarterly Survey of Business Expectations.

The chamber of commerce’s latest poll, published last week, shows business confidence moved from an all-time low of 41 points in March 2020 to 106.1 this September.

But William Buck Australia and New Zealand Managing Director Jamie McKeough, whose chartered accounting firm conducts the poll in conjunction with Business SA, said the growth needs to be considered in the context of labour supply issues.

“It was great to see increasing business confidence in the September quarter, however, I balance this out with continued concerns about labour shortages and a continued slide of business conditions,” he said.

“From the survey, we know that labour shortage is the top issue keeping business owners awake at night for the September quarter, followed by profitability, sales, and mental wellbeing in the workplace.

More than 62 per cent of businesses surveyed by William Buck said it was harder to source labour in the September quarter than in June.

Business SA said the onset of border restrictions in NSW and Victoria have exacerbated “businesses being unable to access interstate and international labour markets confidently and difficulty getting new employees into South Australia”.

South Australia’s borders are due to reopen to fully vaccinated travellers in the eastern states on November 23.