The figures reflect a 76 per cent fall in sales to mainland China in the 12-month period to $274 million following tariffs of more than 200 per cent imposed last November.

While that was expected, perhaps what is more concerning is the volume slump to its other major destinations including the United States, Canada, United Kingdom, Germany and New Zealand.

These markets had been targeted as possible solutions to the China issue and had shown promise in the June figures.

The drop off in sales to the US (down 11 per cent) and Canada (down 12 per cent) – Australia’s second and fourth-most valuable markets – are of particular concern.

Only the UK exports increased in value – up 7 per cent to $460 million – despite a two per cent dip in volume to 251 million litres.

The UK has surpassed China as Australia’s highest value wine export market for the first time in more than a decade.

Wine Australia General Manager Corporate Affairs and Regulation Rachel Triggs said the overall declines reflect the challenges that the Australian wine sector has faced over the past 12 months.

“The decline of exports that we’re seeing now was amplified by the fact that there was a large increase in exports in September and October 2020, driven by exporters shipping wine into mainland China ahead of tariffs being imposed, into the UK ahead of the Brexit transition conclusion, and a surge in demand for Australian wine in the UK and US during the COVID-19 pandemic,” she said.

Developing new export markets following the China tariffs has been a key industry strategy but groups including the SA Wine Industry Association agree that this process will take time.

However, all hope is not lost for exports to Asia, with several countries outside China showing strong growth. 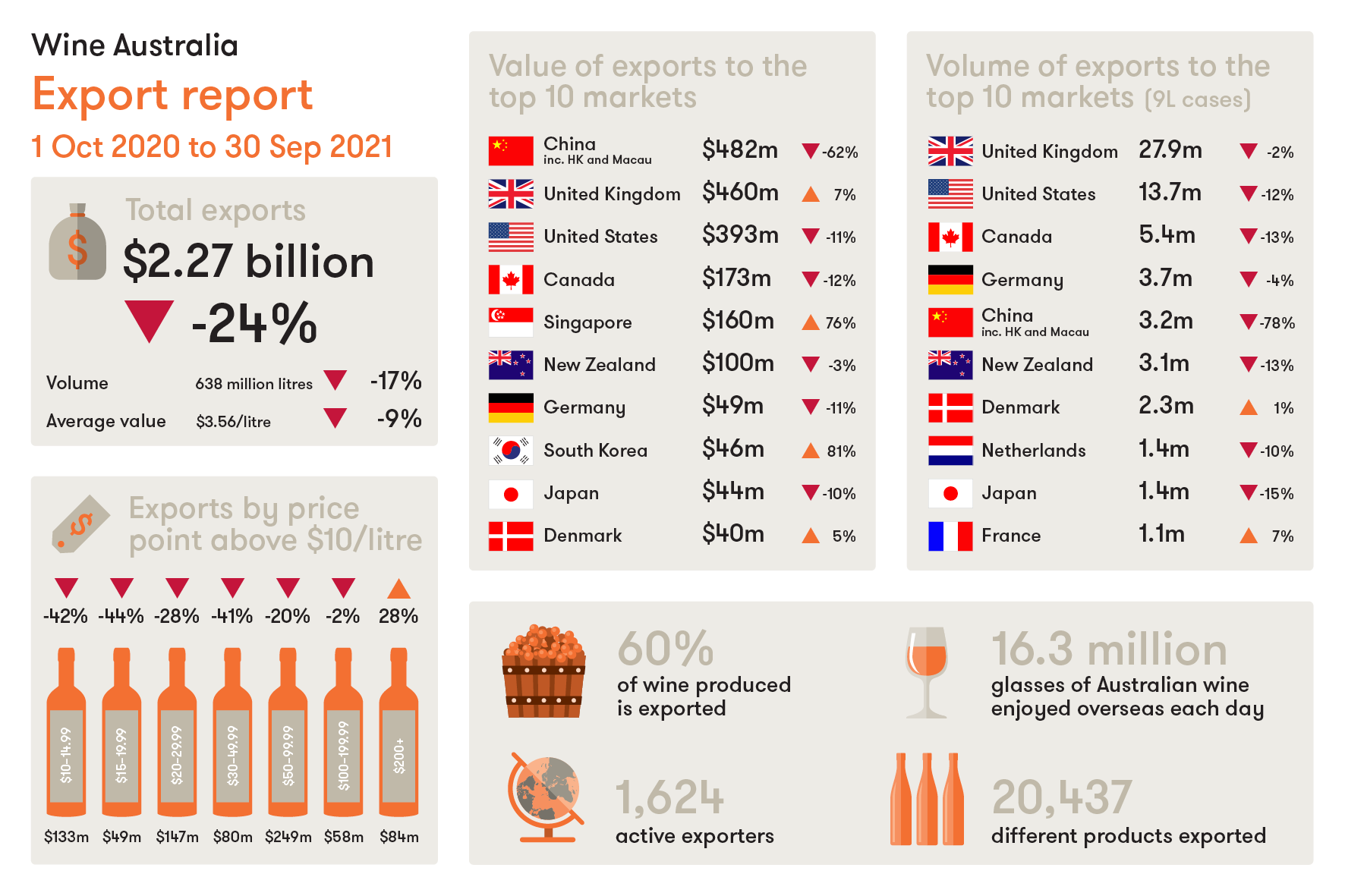 McLaren Vale’s Bec Hardy Wines is proving that gains can be made in the US and UK.

Previously the Geoff Hardy Wines brand had enjoyed a great deal of success in China.

The timing of the rebrand to Bec Hardy a few months before the China tariffs kicked in has turned out to be a stroke of luck.

Bec said she and Richard decided to pull back a lot of the exports that would have previously headed to China under the Geoff Hardy brand because of potential difficulties marketing the brand change in China.

“We’d taken China out of the budget because it was no longer going to be Geoff Hardy, it was going to become Bec Hardy and we recognised with that change there would be a big drop in sales,” she said.

“In that market a change of brand can often be seen as fake so distributors struggle with that.”

The company is now exporting to 13 countries including Indonesia, Canada, Taiwan, Hong Kong, Japan, Vietnam and Singapore and last month secured a major deal to ship about 11,000 cases to the United States.

Domestic sales in Australia have also been strong and distributors have recently been appointed in Western Australia and Tasmania, giving the company nationwide coverage.

Dolan said the recent American deal was the result of several months of work that included working with an in-market consultant in the US to connect Bec Hardy Wines to distribution there.

He said the company had also recently employed someone in the UK to roll out a similar strategy as the US. 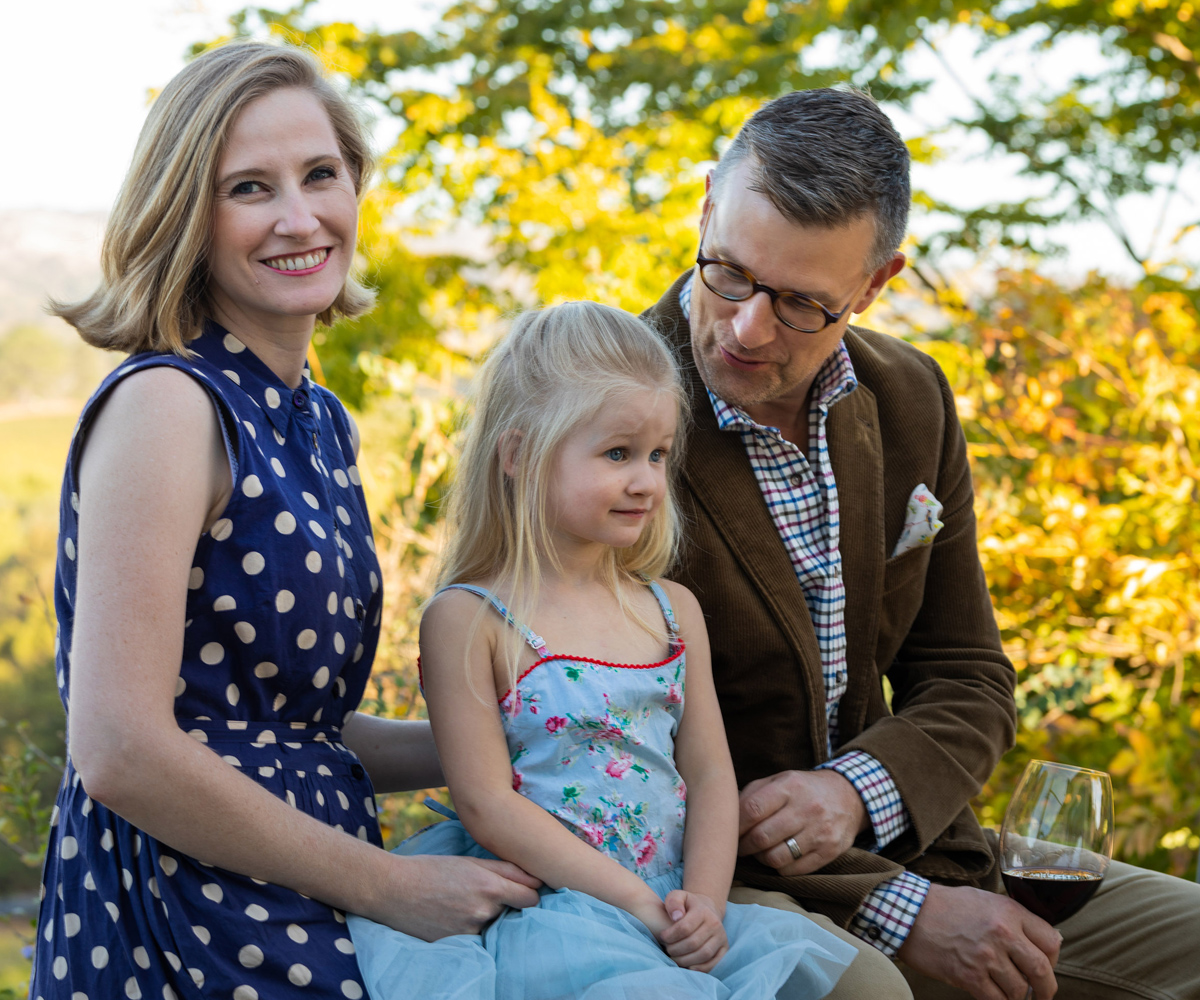 Bec Hardy with husband Richard Dolan and their daughter Matilda.

“In the US and the UK distributors are now up and about and with the right people in the right markets with the right contacts at the right time – as we’ve proven in the US – you can actually do some good things,” Dolan said.

“But just having sales is not enough, you have to have good third-party reviews and a great price to quality ratio that really takes the domestic American market on at their own game.”

Dolan said a flood of available Australian wine once earmarked for China, Brexit and the price-sensitive nature of the UK market made a slightly more complex play that was unlikely to yield significant dividends for at least a year.

“It is a lot more of a longer-term play but it demonstrates a commitment to the market and what is happening right now is because China has turned off a lot of Australian winemakers, they are starting to run to other markets on an incoherent transactional type basis,” he said.

“Whereas what we’re saying is we’re entering the UK because we believe in it as one of the long-term strong markets for Australian wine and we’re investing in sales and marketing and we’ve appointed an in-market consultant and an in-market PR company and we’re happy to work hard with our distributor and to reinvest dollars into building the brand.

“We’ve got a lot of unique selling points and a name that has already got strong awareness in that market that we can capitalise on and it shows a serious approach to the market.”

Geoff Hardy has kept the K1 brand and its associated cellar door at Kuitpo Forest while Bec Hardy Wines operates out of the Pertaringa cellar door in McLaren Vale.

Bec Hardy Wines exports about 40 per cent of its wine and sells the rest domestically.

Dolan said North America – the US and Canada – was the company’s number one export market “and we’re still on the ground floor of that opportunity”.

“The UK will be different and I’m interested to see how that plays out but we’ll certainly be looking for some strong on-premise distribution in bars, restaurants and hotels and also in retail,” he said.

“We still remain very confident and excited about the opportunity long term in China and we are certainly keeping in touch with our friends and distributors there to maintain those links – everything is cyclical.”